Coronavirus: China locks down two cities a year after Wuhan

Residents in parts of Hebei province are restricted as part of measures to stem the coronavirus surge. Authorities finished carrying out a mass COVID-19 testing of all 13 million residents of Xingtai and Shijiazhuang. 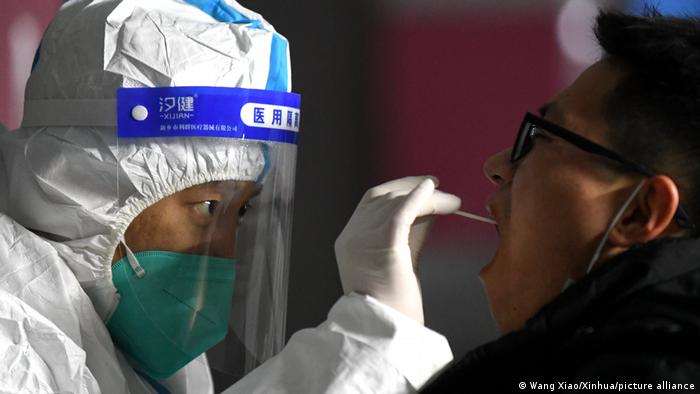 The daily number of new coronavirus cases has doubled in China, the country's national health authority reported on Sunday.

Mainland China registered 69 cases on Saturday, compared with 33 reported a day earlier. The National Health Commission reported that 21 of those people had been infected overseas.

The country also reported 27 asymptomatic cases on Saturday, down from 38 a day earlier. China does not classify asymptomatic patients as confirmed cases.

The latest outbreak has prompted tougher movement restrictions. In Beijing, passengers must scan a health code before boarding a taxi or ride-hailing car.

Most of the locally transmitted cases were found in China's northeastern Hebei province, where more than 380 people have tested positive.

Almost all the cases are in Hebei's provincial capital, Shijiazhuang, about 260 kilometers (160 miles) southwest of Beijing. At least 11 million people are in lockdown and banned from leaving the city for at least a week.

A handful of COVID-19 cases have also been found in Xingtai city, 110 kilometers south of Shijiazhuang.

Both cities have finished carrying out mass testing of all 13 million people, a provincial official said in a briefing on Sunday.

Public transport and taxis have also been suspended.

The growing outbreak in Hebei has also triggered concerns that the coronavirus might further spread to the capital as the province borders Beijing.

Travel has been restricted, and workers from Hebei are required to show proof of employment in Beijing to enter the city.

The WHO had said that two of their experts had been denied entry to China. Now Beijing has hit back; claiming details of the COVID-19 fact-finding mission were still being finalized.