Austrian Chancellor Karl Nehammer has tested positive for coronavirus, the chancellery said. The Austrian leader is in self-isolation and not showing symptoms. 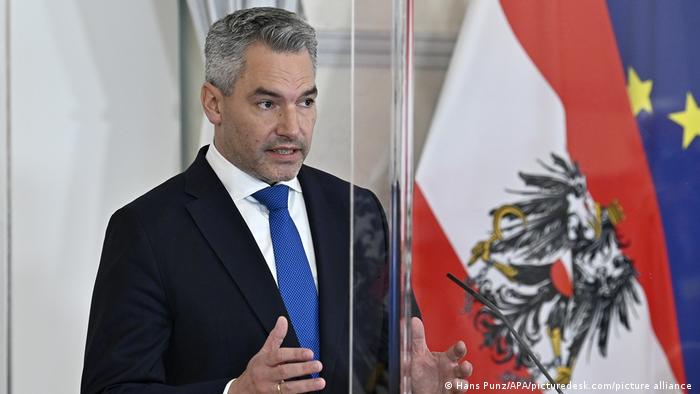 Austrian Chancellor Karl Nehammer said on Friday that he tested positive for COVID-19 and that the infection came from a member of his security detail.

The news comes as the Austrian government is pressing ahead with plans to implement a general vaccine mandate starting in February.

It also comes as the country is logging an uptick in COVID-19 cases after infections slowed during a lockdown in November and December last year.

According to the Austrian Chancellery, Nehammer is not exhibiting any symptoms.

"There is no need to worry, I am fine and doing well," the Chancellery quoted Nehammer as saying.

The Austrian chancellor said he has received a booster shot and is "as protected as possible from a severe infection."

His wife and children have so far tested negative, his office added.

Nehammer is isolating at home, where he continues to work via video and telephone meetings. He will not have in-person meetings for the next few days, the Chancellery said.

On Thursday, Nehammer took part in a meeting on tightening the country's COVID curbs — but his office said he wore a protective FFP2 mask throughout, and that journalists were protected by plexiglass screens.

Who is Karl Nehammer?

Nehammer was sworn in as chancellor at the beginning of December 2021 following political upheaval that saw the country cycle through several chancellors in a matter of months.

The upheaval was kicked off by former Chancellor Sebastian Kurz's abrupt, and scandal-plagued, exit from politics.

The 49-year-old Nehammer, who also now heads the ruling conservative Austrian People's Party (ÖVP), was formerly the country's interior minister from 2020 to 2021.

The Vienna-born Nehammer worked in the army for several years. He then started working as a communications adviser before becoming a politician in 2017.

As interior minister, Nehammer supported Kurz in taking a hardline anti-immigration stance and is likely to continue with a harsh refugee policy.

The new chancellor has also said he intends to continue with plans to push through a vaccine mandate for the county and take a hardline approach to those who refuse to be vaccinated.