Bamlanivimab and REGN-CoV-2 are two promising antibody treatments to combat COVID-19. How do they work? 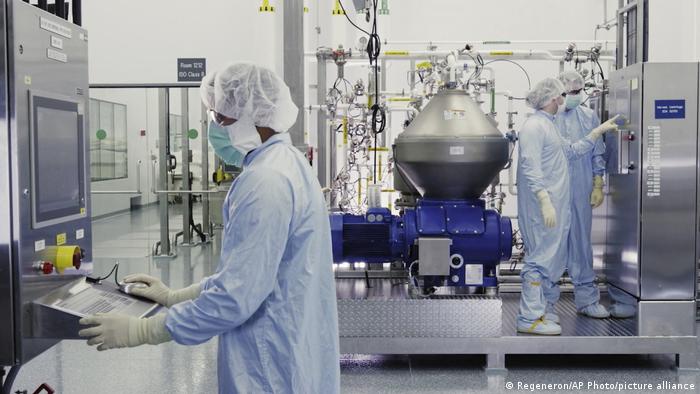 What are the most effective therapies for treating a SARS-CoV-2 infection? Which therapies are showing promise, and which are little more than snake oil? Keeping track of treatments is tricky, with news of new vaccines and drugs breaking almost daily.

The German government has now announced it will buy 200,000 doses of bamlanivimab and REGN-CoV-2 for a total cost of €400 million ($485 million), which works out as €2,000 ($2,400) per dose. The drugs will be administered to high-risk patients. Bamlanivimab is a single antibody therapy produced by Eli Lilly. REGN-CoV-2 consists of two antibodies — casirivimab and imdevimab — and has been developed by Regeneron.

Former US President Donald Trump was treated with the latter after contracting the coronavirus in October last year. Bamlanivimab and REGN-CoV-2 both received emergency use by the US Food and Drug Administration (FDA) in November 2020. The European Union has yet to greenlight either of the therapies.

How do bamlanivimab and REGN-CoV-2 work?

Both antibody treatments are designed to block the SARS-CoV-2 spike protein and thus prevent the virus from attaching to and entering human cells. These identical so-called monoclonal antibodies are lab-engineered and designed to attack one specific virus in one distinct way.

The advantage of Regeneron's drug cocktail is that by containing two antibodies, it increases the chance that at least one of them will prove effective during treatment, virologist Sandra Ciesek told German public broadcaster NDR.

German Health Minister Jens Spahn has said these treatments "work like passive immunizations," adding that "administering these antibodies can help at-risk patients avoid a severe case of the disease."

Vaccinations, however, differ from such monoclonal antibody treatments in that they provoke an immune response in the human body that leads to the production of various antibodies. These bind to the virus in different locations. They are referred to as polyclonal antibodies. 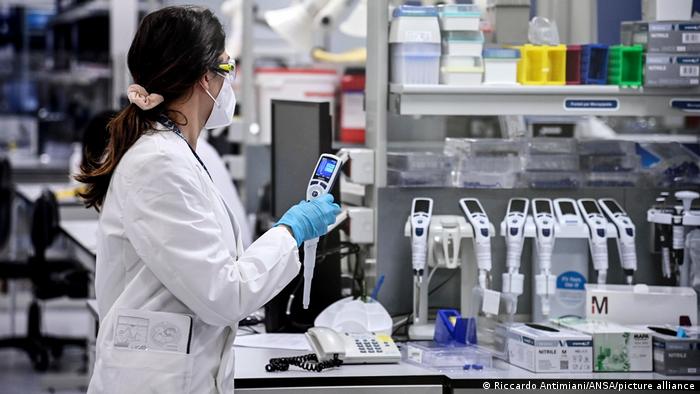 Bamlanivimab is also being produced in Italy for Eli Lilly

Who will receive the treatment?

In the US, bamlanivimab and REGN-CoV-2 have been approved for treating patients aged 12 years and above who are at risk of developing severe COVID-19 symptoms. The FDA says both treatments reduce the chances of a serious disease progression.

Hospitalized patients, or those reliant on respirators, are not permitted to receive these drugs. REGN-CoV-2 manufacturer Regeneron says people who have not yet produced any antibodies against the coronavirus benefit the most from its antibody cocktail.

Treatments proved most effective within 10 days of infection, says FDA head Stephen Hahn. Nevertheless, there is still a dearth of scientific data on this therapy, many scientists say.

German authorities plan to test monoclonal antibody treatments on patients who are either at risk of developing serious COVID-19 symptoms, or who suffer from weak immune systems that do not produce enough antibodies.

At a later stage, interdisciplinary expert panels will determine which patients are eligible for one of the therapies. Authorities are currently discussing eligibility criteria.

What do we know about side effects?

A clinical trial involving REGN-CoV-2 found the treatment did not lead to a high incidence of serious side effects in patients.

The FDA has nevertheless highlighted the potential risk of hypersensitivity reactions, such as anaphylactic shocks, that can be triggered by the therapy. 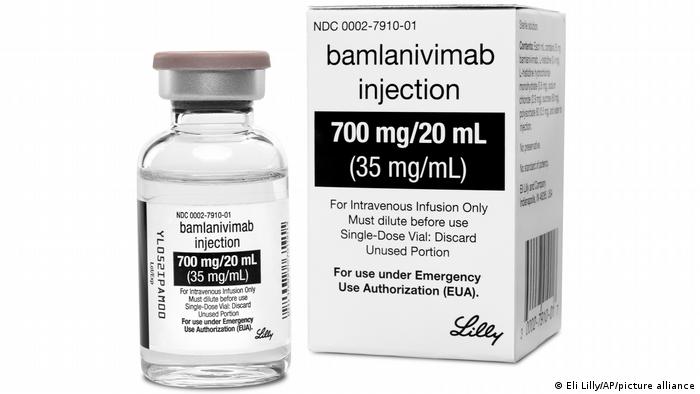 One dose costs around €2,000 — antibodies are very hard to produce

According to the FDA, severe, unexpected side effects cannot be ruled out with REGN-CoV-2, as research into the casirivimab and imdevimab antibodies is still ongoing.

The agency has said that Eli Lilly‘s bamlanivimab antibody drug caused severe side effects in two out of 850 cases. Both received special treatment. Here, too, not all potential side effects may be known yet, the FDA said.

When will antibody treatments be approved in the EU?

At present, the European Medicines Agency (EMA) is not looking into the approval of either antibody treatment. Regeneron, however, plans to team up with Swiss drugmaker Roche to request approval of REGN-CoV-2 in the EU. Eli Lilly and other pharma companies are expected to soon follow suit.

Virologist Ciesek believes that antibody drugs will be administered only to a select few, as producing them is complicated and expensive. "They may be used on high-risk patients, though they will certainly not be able to be used on all," she said.

Recent clinical trials have found that antibody therapies can lower the viral load in the throat of infected people and improve their medical condition.

A Eli Lilly press release says that a clinical study on some 1,000 elderly US care home residents and staff found that bamlanivimab reduced the COVID-19 infection risk by 80%. The study has not yet gone through the formal peer review process, in which findings are evaluated by independent researchers from the same academic field.

Not everyone, meanwhile, is optimistic about the potential of antibody treatments. Wolf-Dieter Ludwig, who head the Drug Commission of the German Medical Association, says purchasing such drugs is premature. He says there is insufficient scientific evidence to prove their efficacy. Ludwig therefore advises that these drugs should only be administered in clinical trials.

But Patrick Cramer, a researcher at the Göttingen-based Max Planck Institute for Biophysical Chemistry, argues that buying these drugs is "sensible." He says it provides additional options for combating the coronavirus. Speaking to German public broadcaster ZDF, Cramer said "monoclonal antibodies have been used for medical purposes for many years; this technology is well-developed."

Germany's Paul Ehrlich Institute (PEI), the country's regulatory body for vaccines and biomedicines, says antibody treatments may be applied following an individual cost-benefit analysis. It says a treatment is advisable in"specific instances" where infected adults show mild to moderate COVID-19 symptoms and are at risk of developing severe ones.

An expert panel convened by Germany's public health body, the Robert Koch Institute, in December found that REGN-CoV-2 could be used in closely monitored clinical trials.

'Vaccination' fresh out of the oven