Health Minister Jens Spahn has said the government has purchased a new drug to help fight COVID-19 amid a vaccine shortage. Germany will be the first EU nation to use the medicine, which was also given to Donald Trump. 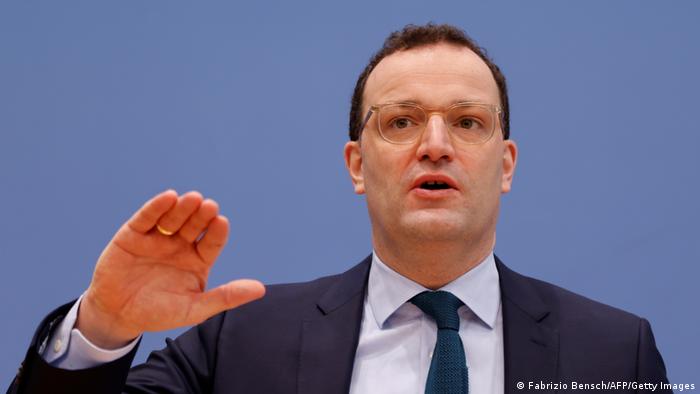 Spahn said the pandemic requires not just 'decisive government action,' but also 'responsible behavior by everyone'

Health Minister Jens Spahn told German newspaper Bild am Sonntag that the government had purchased a new antibody-based drug to fight the coronavirus.

"Starting next week, the monoclonal antibodies will be used in Germany as the first country in the EU. Initially in university clinics," he said. "The federal government has bought 200,000 doses for €400 million ($487 million)."

Former US President Donald Trump was treated with this form of antibody treatment after he was infected with the coronavirus last October, Spahn said.

"They act like a passive vaccination. Administering these antibodies in the early stages can help high-risk patients avoid a more serious progression," he added.

Trump, who was briefly hospitalized with the virus, was treated with the REGN-COV2 antibody cocktail from US company Regeneron.

Spahn has recently come under fire for a slower-than-expected rollout of vaccines in Germany, despite his earlier warnings that there would be a limited supply of shots in the early stages of the inoculation drive. Berlin has said it expects to be able to offer all Germans a jab by the end of August.

Speaking with Bild, Spahn warned against assigning blame during the pandemic, following growing criticism of the country's vaccine shortage.

"We should be careful that 2021 does not become the year of blame," Spahn told Bild. "Talking about mistakes and failures is important. But without it becoming relentless and only being about shifting blame onto others."

He acknowledged that Germany had been too hesitant in acting to combat the pandemic, but added that politicians and citizens shared responsibility for the high infection rates and death toll in the outbreak's second wave.

"We all had the deceptive feeling that we had the virus well under control. We suspected the force with which the coronavirus could return, but the vast majority did not want to admit it," he said.

Spahn ruled out lifting coronavirus restrictions for vaccinated people until there is a vaccination available for all citizens.

"We've stood in solidarity through this pandemic for a year. Now we might as well all play by the rules for the remaining months until everyone can be vaccinated," he said.

Germany has extended its nationwide lockdown until February 14, despite increasing calls for some measures to be eased. Epidemiologists in the country have said the debate is premature.

"From an epidemiological point of view, it is not clear to me why an early easing [of restrictions] is being discussed now," Hajo Zeeb of the Leibniz Institute for Prevention Research and Epidemiology told Germany's dpa news agency, citing ongoing "deadly" infection rates.

Eva Grill, president of the German Society for Epidemiology, said she was deeply concerned: "If the current lockdown is relaxed too soon we risk a third wave, which will hit us harder because the new virus variant is much more contagious."

Germany has recorded 2,134,936 coronavirus cases with 51,870 deaths, according to the latest data from the Robert Koch Institute (RKI) for infectious diseases.

Germany should have been 'tougher'

Spahn acknowledged that Germany should have taken tougher measures as early as October when infection rates were lower.

"It takes decisive government action, but it also takes responsible behavior from everyone. We are all in the same boat," he said.

Back in April, Spahn appealed for increased understanding for difficult political decisions during the coronavirus crisis. He also warned that measures were likely to change depending on the various phases of the pandemic.