One in six German retailers could go bankrupt during the coronavirus crisis, a trade industry has said. For most shops, rent is still due despite being forced to close their doors. 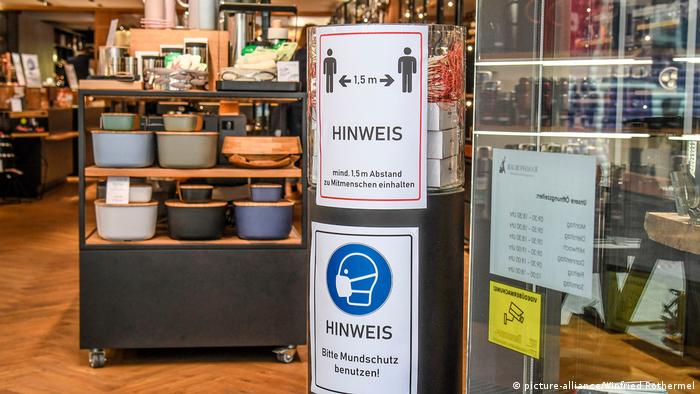 Up to 50,000 German retailers — or one of every six retail shops in Germany — could go bankrupt due to the coronavirus crisis, the head of the German Retail Association (HDE) Stefan Genth told newspapers of Germany's Funke Media groupTuesday.

"Over the four weeks that stores in the non-food sector have been closed, we’ve lost around €30 billion ($32.5 billion) in revenue that we won’t be able get back again," Genth said. Despite smaller stores being allowed to reopen last week, Genth said customer traffic had been low.

The branch is losing nearly a billion euros a day, he said.

According to Genth, the association believes that up to 50,000 retailers could go bankrupt because many do not possess enough capital to survive the phase, largely due to the high cost of rent. HDE estimates that there are around 300,000 retail shops in Germany.

Corporate landlords, Genth said, have been particularly resistant to deferring rent, or when they do, often require an interest payment of between 5 and 9%.

The association leader called for a greater financial rescue package for retailers that, due to restrictions put in place because of coronavirus, were forced to close their shops.

"For many retailers, they’re still required to pay their largest cost — rent — despite shops being closed," Genth said.

"We fear that after this crisis many city centers won’t look the same anymore, and that many shops will be missing."

Delivery giant DHL is doing a roaring trade during the coronavirus pandemic. It's hiring extra staff, and appealed for special permission to deliver on Sundays — when a lockdown of sorts always applies in Germany. (22.04.2020)

Coronavirus: German easing of lockdown to start with schools on May 4

Germany will reopen schools in early May and allow some of the currently closed retailers to open as well, Chancellor Angela Merkel said. Social distancing measures will stay in place. Follow DW for the latest. (15.04.2020)

The COVID-19 incidence rate is going down across Germany and shops are set to reopen completely. Those who have managed to survive the lockdown still face an uphill battle to win back customers.