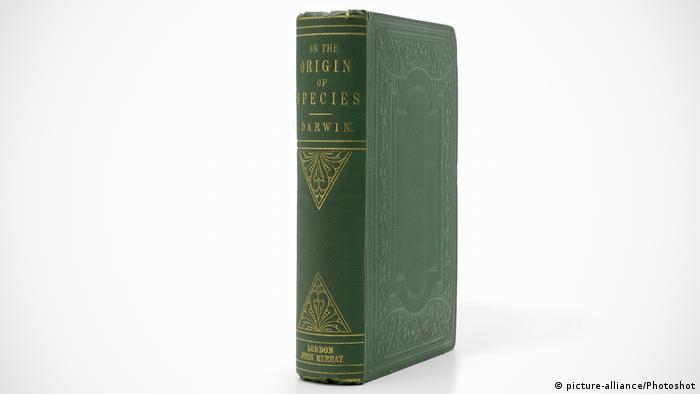 A first edition of Charles Darwin's Origin of Species has sold for more than half a million dollars at auction, setting a world record, Bonhams auction house said.

Bonhams said the 160-year-old copy of On the Origin of Species by Means of Natural Selection was sold for $500,075 (€445,000) to an anonymous telephone buyer following a four-way bidding battle that ended at midnight on Thursday. The book had been held in a private collection for almost 100 years.

Darwin, a British naturalist and biologist who developed the theory of evolution by observing and studying birds, plants and fossils around the world, published the book in 1859.

His revolutionary scientific theory is considered a turning point in the history of science as it clashed with religious beliefs in creation.

The book was among a number of first edition presentation copies that were sent to family and friends shortly after it was published.

The original owner of the book was German botanist Robert Caspary, who corresponded frequently with Darwin.

It bears the inscription "Professor Caspary / Koenigsberg / from the author."

Caspary's work was discussed in other Darwin publications including his 1868 The Variation of Animals and Plants Under Domestication as well as in his 1877 The Different Forms of Flowers on Plants of the Same Species.

The book was purchased in the early 20th century by Edward Bradford Titchener, an English-born psychologist and professor at Cornell University, and handed down to the current owner.

Celebrations have been taking place around the world for the 200th anniversary of the birth of Charles Darwin, the man whose book "On The Origin of Species" transformed our view of the natural world. (12.02.2009)

Bribiescas: On men, aging and why reproductive sex is survival - but also death

If you're a male over the age of 25, chances are you've survived the worst of your "stupid" risk-taking phases. Richard Bribiescas says men are still more likely to die younger than most women - though we don't know why. (21.09.2016)

Turkey will stop teaching Darwin's theory of evolution in high schools. Secular Turks are alarmed that their country is taking an increasingly Islamist direction under President Erdogan's authoritarian leadership. (23.06.2017)