COP26: ′One of the whitest′ climate conferences in years, say environmentalists | Environment | All topics from climate change to conservation | DW | 03.11.2021

COP26: 'One of the whitest' climate conferences in years, say environmentalists

The countries hit hardest by climate change are struggling to attend a UN climate summit that has been hailed as the "best last chance" to stop global warming. What are the implications? 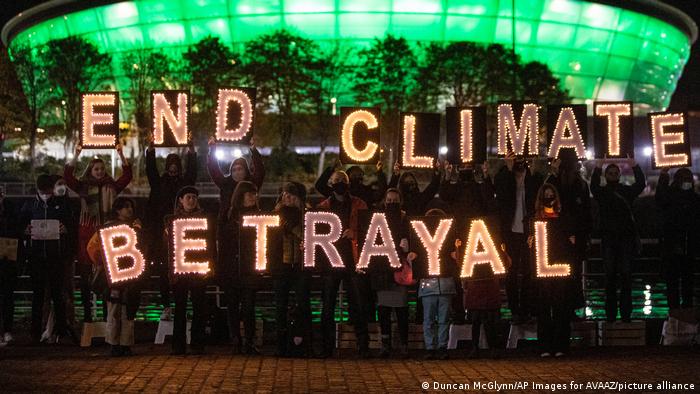 A catalog of mistakes means that representatives from the Global South have found it difficult to show up to a conference in the United Kingdom where world leaders are deciding how to slow the planet's further heating.

The number of people registered to attend COP26 has doubled from the last UN climate conference in 2019 to almost 40,000 people, according to documents published by the organizers Tuesday, but delegates and observers from poorer countries say their colleagues have struggled to make it to the summit.

Travel restrictions to slow the spread of the coronavirus, last-minute changes in quarantine rules, and the high costs of flights and hotels have forced many delegates to attend the conference via video call. Because of restrictions on space in the rooms in Glasgow, environmental groups representing vulnerable people across the world say they have been shut out of meetings.

The summit — hailed as the "best last chance" to limit global warming to 1.5 degrees Celsius above preindustrial temperatures — is an opportunity for world leaders to agree on deals that would stave off increasingly extreme weather. The collective voice of those who really need urgent climate action is what matters, said Tasneem Essop, international director of Climate Action Network, a global network of 1,500 civil society groups. "Unfortunately, that is already diminished," Essop said.

'Views are not being considered'

The UK government, which is hosting the event, claimed in May that COP26 should be "the most inclusive COP ever" and offered vaccines to all delegates, observers and media. But participants have said both vaccines and visas were difficult to get hold of.

Particularly frustrating, they say, is that most poor and middle-income countries were only taken off the UK's coronavirus red list — for which incoming travelers would need to quarantine for 10 days — two weeks before the conference. At such short notice, some delegates had no choice but to stay at home, while others who booked travel last-minute have only been able to find accommodation in the neighboring city Edinburgh.

"If you're not represented, your views are not being considered," said Colin Young, director of the Caribbean Community Climate Change Centre (CARICOM), a group of 15 Caribbean countries, some of which were initially on the red list. "Our delegations are always small to start with because of issues of funding. When you have to trim that down even more, then representation is really an issue that we are concerned about."

Seats at the table

At the heart of the dispute is a question of fairness.

Countries from the Global South, which have done the least to cause climate change but bear the brunt of its damages, are fighting for agreements on two key deals at the summit. The first is to fulfil a broken promise made by rich countries at a climate summit in 2009 to give poorer ones $100 billion a year by 2020 to green their economies and adapt to climate change. The second is to acknowledge their role in the losses and damages caused by increasingly extreme weather events like tropical cyclones and wildfires. 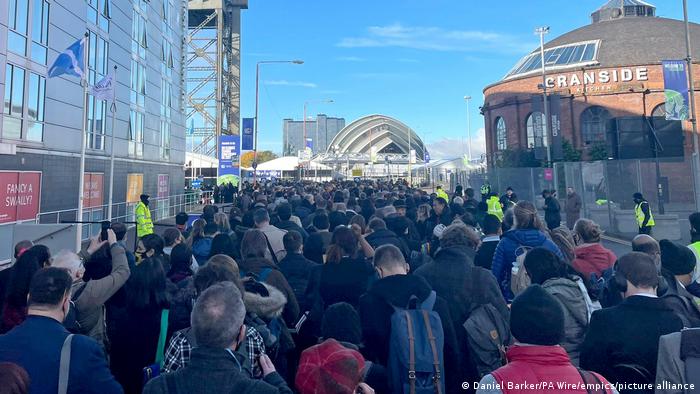 Delegates face long waits to get into the COP26 summit. Some 40,000 are registered to attend but many from the Global South have not been able to make it

"That has been an issue that the rich nations have not wanted to address at all," said Essop from Climate Action Network. The voices of poorer countries, she added, would be "critical" to ensure rich countries finance losses and damages.

"If the developed countries are serious, they need to show that leadership commitment," said Halima Bawa-Bwari, an environmental scientist at the Department of Climate Change, Nigeria, adding that many of the Nigerian delegation were missing meetings because they were commuting from outside the city.

The UNFCCC, the body that organizes climate negotiations, published a list of registered participants after requests from DW. It shows that compared to the previous year, around 150 countries increased the size of their delegation, 6 stayed the same, and 33 registered smaller delegations.

But it is unclear how many of those roughly 22,000 registered delegates, 14,000 observers and 4,000 journalists will turn up. The UNFCCC did not specify which participants are only attending virtually. It had not responded to a request for comment by the time of publication.

"If it's held virtually, Africa can't participate," said Mamoudou Ouedraogo from the civil society group Association for Education and Environment in Burkina Faso, adding that unlike many of his colleagues, he was lucky to be able to get to Glasgow.

Participants attending virtually have to battle with poor internet connections. "You can go two, three days without internet," Ouedraogo said.

Is climate justice a pipe dream?

Bianca Coutinho, an advocacy advisor at ICLEI, a group representing mayors across the world, said they had been forced to ask mayors from cities in the Global South to speak on behalf of others who could not make it. They also held joint sessions with some participants attending virtually and others in-person. "Luckily, the hybrid events are working," she said.

Elsewhere within the conference halls, participants are finding it hard to take part in sessions described as open.

To help maintain social distancing, many sessions are ticketed. But coalitions of environmental groups have been granted just a handful of tickets to cover dozens of events, campaigners said.

"There is not enough space in the venue to accommodate everybody that is accredited," said Nathan Thanki from the Global Campaign to Demand Climate Justice.

The overall result, participants have complained, is a climate summit in which the countries and peoples hit hardest by climate change are unable to get their voices heard.

"Civil society, social movements and governments have found it incredibly challenging to jump through all the hoops necessary to get here to the UK," said Thanki. "Compared to previous years, this COP is one of the whitest."

With additional reporting from Irene Banos Ruiz and Heather Moore, and data analysis from Gianna Grün

Heads of state gathering for the climate conference in Glasgow will argue over plans to burn fewer fossil fuels, the only way to honor their pledges to protect the planet.

Germany's environment minister says South Africa's coal phase-out "has the potential to become a blueprint for other regions." The US and several European countries pledged billions on clean energy development.