Convicted soldier: A victory for Israeli democracy | Middle East | News and analysis of events in the Arab world | DW | 04.01.2017

A 19-year-old Israeli soldier who shot a Palestinian attacker has been convicted of manslaughter. Reactions range from outrage to relief, with Prime Minister Netanyahu urging a pardon. Miriam Dagan reports from Tel Aviv.

It's a case that has deeply divided the country more than any other topic within the past few months in Israel: a 19-year-old soldier who shot a Palestinian attacker in the West Bank has been convicted of manslaughter by a military court. He faces a maximum of 20 years in prison. Outside the court at army headquarters in central Tel Aviv, right-wing supporters clashed with police Wednesday morning.

In March 2016, then 18-year-old Elor Azaria, carrying out his regular military service, shot a Palestinian attacker in the head while the latter was already lying on the ground. The Palestinian had stabbed and wounded an Israeli soldier and had already been shot. A member of the Israeli human rights group B'Tselem filmed the incident. 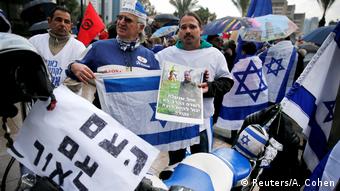 Supporters of Elor Azaria hold a sign which reads: 'A soldier that was sent to the battle field cannot be a murderer full stop'

During the trial, Elor Azaria's defense argued that he had believed the attacker still posed a threat to himself and his fellow soldiers, suspecting he may have been rigged with explosives.

But the evidence against him was overwhelming: the video shows the attacker lying motionless on the ground. A witness said Azaria had told his mates that the terrorist deserved to die. "There is no grounds for the claim of self-defense," according to the ruling. The court decided that Azaria broke the law which stipulates that deadly force cannot be used once the assailant no longer poses an immediate threat.

One reason the case is so divisive is that the incident happened in the midst of a wave of attacks involving "lone wolf" stabbings by Palestinians. Many Israelis view the ruling, and the trial itself, as unfair. Demonstrators' posters outside the court read: "People of Israel do not abandon a soldier in the battlefield." Some fear that young soldiers - on top of the strain they already face – now have to be scared of being punished and going to prison for operations performed while on duty. 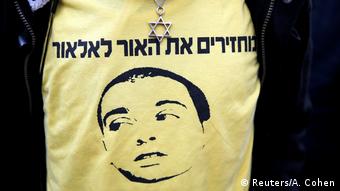 The T-shirt reads: "Bringing the light back to Elor"

The ruling is painful even for many of those who think the verdict is just, because their sons and daughters have to complete military service, too. Their children may possibly find themselves in high-pressure situations where they fear for their lives and have to make responsible decisions about life and death within a matter of minutes.

There is a moral dilemma here: when is killing allowed, when does it count as self-defense, or as defense of civilians, and where exactly is the line drawn? These questions are being intensely debated today, as they have in the past few months in Israel. There have been calls for clearer definitions of when to shoot from the army commanders. Some have demanded the army take more pains to check whether soldiers are psychologically suited for difficult military operations.

The army Chief of Staff Gadi Eisenkot spoke in no unclear terms a day before the verdict. Answering supporters of Azaria who portrayed him as "everbody's son," he said: "He is not our child. He is a warrior, a soldier, who must dedicate his life to carry out the tasks we give him. We cannot be confused about this."

There was also fierce discussion about politicians exploiting the case for their own means. Former defense minister Moshe Ya'alon had to leave office because of the Azaria case. In the aftermath of the March, 2016, shooting he had called on soldiers to speak out against extremism, in defiance of Netanyahu, who spoke out in support of the soldier and his family.

On Wednesday, however, after the verdict, the current, right-wing defense minister, Avigdor Lieberman, spoke rather conciliatory words. He asked those who,  like him, "are not happy with the verdict to respect it nevertheless. We have to support our army and the Chief of Staff. Beyond any political discussion, we have to protect the army and keep it out of the political dispute," he said on Israeli television.

Israeli Prime Minister Benjamin Netanyahu urged a pardon, saying that it was "a hard and painful day for us all - first and foremost for Elor and his family," on his Facebook page. 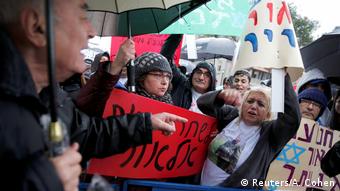 Supporters of Azaria gathered outside the courtroom in Tel Aviv

The human rights organization B'Tselem remained critical in a statement it made to Deutsche Welle: "The fact that one soldier was convicted today does not exonerate the Israeli military law enforcement system from its routine whitewashing of cases in which security forces kill or injure Palestinians with no accountability."

Professor Amichai Cohen from the liberal think tank Israel Democracy Institute sees the verdict as a victory for Israeli democracy. The exceptional cases where soldiers are convicted always cause a public outcry, according to Cohen. He mentions the example of the British soldier Blackman who was convicted of murder in the war in Afghanistan.

The reason is that the person who is killing is not there voluntarily, but because his country ordered him to be. It's especially controversial when the victim is not an innocent civilian, but an attacker, as in the case of Azaria. "It was a test for our judicial system, and I am proud, because the system proved itself," Cohen added.

The big difference between Israel and most other democratic countries is that in Israel, military service is mandatory and there's no civil service alternative. Young Israelis have no choice, they have to serve - another reason why the case has moved Israeli society so deeply.  Politicians on the right, but even a prominent voice on the center-left - Israeli member of parliament Shelly Yachimovich - have now started saying that it might be wise to consider pardoning Elor Azaria.

Israeli soldier convicted of manslaughter over death of Palestinian

Elor Azaria has been found guilty over the death of an immobile Palestinian suspect that was caught on video. Protesters and right-wing politicians had expressed strong support for the soldier over military condemnation. (04.01.2017)

An Israeli soldier is on trial for shooting a wounded man in the head while he lay on his back. Elor Azaria killed the 21-year-old Palestinian on March 24 in the city of Hebron, in the south of the occupied West Bank. (09.05.2016)