Myanmar's president has signed off on a law that says couples must space their children 36 months apart. This is the first of four "race and religious protection" laws proposed by Buddhist nationalists. 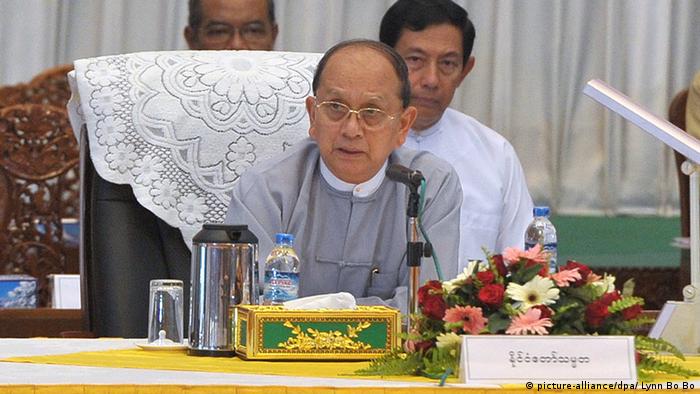 The president of Myanmar has signed a controversial population control bill into law, state media reported on Saturday. The law requires mothers to have their children three years apart. It was passed over the objections of rights activists, who say that it not only represses women, but also religious and ethnic minorities.

The Population Control Health Care Bill was drafted under pressure from hard-line Buddhists with anti-Muslim sentiment in mind, after being passed by parliament last month and signed by President Thein Sein (pictured above) on Tuesday, according to Burmese media.

Local authorities now have the power to implement three-year birth spacing in areas with rapid population growth, but the statute doesn't describe any punitive measures for parents who do not comply.

After beginning the move from dictatorship to fledgling democracy four years ago, newly inaugurated freedoms of expression have exposed the deep-seated hatred for , thousands of whom have fled the country in boats after facing persecution at home.

Buddhist fundamentalists have repeatedly voiced their belief that Muslims, with their high birthrates, could take over the country of 50 million inhabitants - even though they make up only 10 percent of the population.

Last week, Human Rights Watch warned that the new law could be used to target minorities.

"Activists with a racist, anti-Muslim agenda pressed for this population law, so there is every reason to expect it to be implemented in a discriminatory way," said Brad Adams, head of Human Rights Watch's Asia office.

"The population bill as well as the other 'race and religion' bills under consideration are likely to escalate repression and sectarian violence," he added.

Myanmar leaders are to attend a regional conference on the migrant crisis next week. The decision comes as Malaysia begins search and rescue operations for Rohingya and Bangladeshi migrants stranded at sea. (22.05.2015)

Indonesia and Malaysia have said they will provide temporary shelter for some 7,000 migrants stranded at sea. The agreement is the first breakthrough in the humanitarian crisis confronting Southeast Asia. (20.05.2015)

IOM: 'The longer the migrant crisis lasts, the worse it gets'

Thousands of Rohingya and Bangladeshi migrants remain stranded at sea, as Southeast Asian nations refuse to let them come ashore. The IOM's Jeffrey Labovitz calls on these governments to focus first on saving lives. (18.05.2015)