There is mounting pressure on the Bundeswehr to engage in military action abroad. Operations on home soil are also discussed. To be able to carry out those tasks, the Bundeswehr considers recruitment of EU citizens. 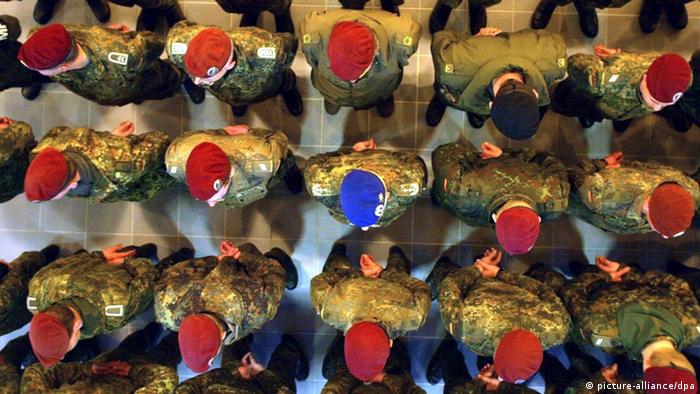 The German Defense Ministry has released a new plan outlining the country's future defense and security policies. A paradigm shift is in the works. (13.07.2016)

Rarely do technocratic texts manage to create that kind of stir: we learn from the Federal Government that the opening of the Bundeswehr to EU citizens offers "not just a far-reaching integration and regeneration potential for the Bundeswehr's personnel strength, it would also send a strong signal for a European perspective." Thus the official wording in a strategy paper which outlines the German cabinet's security policy targets.

Put in simpler terms: By recruiting soldiers from other EU countries, the Bundeswehr could, possibly, achieve its personnel goal of 170,000 career and temporary soldiers easier. In passing, it would also become more colorful.

The Ministry of Defence presumes that integration of foreign nationals from the European Union will be an easy task: "EU citizens, both male and female, have a similar educational level, there a few cultural differences, and the German language, command of which is - and will remain - an essential requirement for service in the Bundeswehr, is widely spoken," a spokeswoman told DW.

However, the implementation of the plan will see many obstacles. Since the Bundeswehr was established 61 years ago, only German citizens have been allowed to become soldiers. That's what Germany's Military Act provides, and it would have to be changed for the proposed opening to materialize. Until now, the Bundeswehr can incorporate citizens from other nations only on a case-by-case basis.

Currently, only one EU citizen is a Bundeswehr soldier

A spokeswoman for the Ministry of Defence told DW that she was aware of only one exception to the rule: A Romanian doctor has been on duty as a Bundeswehr medical officer since 2014. Things are different in the civilian sector: At home and abroad, 12 EU citizens work for the Bundeswehr as civil servants, with another 550 working as employees.

According to Defence Minister Ursula von der Leyen, the opening will not take place at short notice. She referred to similar possibilities under the Civil Servants law, however, "many questions remain unanswered" in this area.

The Ministry of Defence told DW that several other aspects must be taken into consideration prior to a change of the Military Act. Initially, European partners had to give their feedback on how the opening of the Bundeswehr would be received. In addition, there had to be a review on how reservists of other EU armed forces could be treated, and how an adjustment of pension rights could be achieved. With regard to many issues, "only the initial stage" had been reached. Therefore, the potential of prospective EU recruits could not be quantified either.

A good signal, not to be overrated 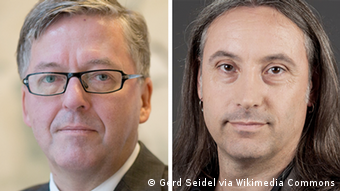 Talking to DW, the German parliament's military ombudsman, Hans-Peter Bartels, gave a generally positive assessment of the move. The SPD politician sees parallels to the already established opening for EU citizens in some areas of the public service. "We should not expect large figures, simply because of the language barrier. Of course, you have to speak German if you want to serve in the German army, and in addition to that there will be a number of legal problems. For example, countries with compulsory military service are obviously off limits with respect to recruitment for German armed forces."

However, the number of EU states where this is relevant is rather limited. Denmark, Estonia, Finland, Greece, Austria and Cyprus are the remaining member states which uphold compulsory military service.

The German Armed Forces Association, however, has responded with harsh criticism, referring to a special relationship of trust between nation and soldier. Being a soldier wasn't a profession like any other, said the Association's president, Andre Wüstner. A soldier's identity, in particular, had considerable national characteristics, despite a European system of values. This had to be brought to politicians' attention time and again.

To Alexander Neu, a member of the Bundestag defense committee and MP for the Left party, incorporation of EU citizens into the armed forces is a questionable move in several respects. Talking to DW, he seemed convinced that salary disparities across Europe would make Germany attractive to a large number of potential recruits.

Neu criticized that primarily young men from economically weak countries, such as Romania, Bulgaria or parts of the former Yugoslavia, could be lured away: "Young men who are needed to build up the local economies would come to Germany, and those economies would not exactly benefit from such a state of affairs."

Long tradition of collaboration with other EU armies

By opening up to EU citizens, the Bundeswehr would enter unchartered territory. It has, however, much more experience when it comes to collaborating with soldiers of other EU countries. The German-French Brigade was established in October 1989. August 1995 saw the launch of the German-Dutch Corps. German, French, and Belgian soldiers, among others, collaborate in the Eurocorps. And in 2014, some 2,300 Dutch paratroopers were integrated into the German Division Schnelle Kräfte (Rapid Forces Division).

This kind of close collaboration is in line with the proposals for a new European foreign policy and security strategy recently submitted by EU chief diplomat Federica Mogherini. While it does not advocate an EU army, it does call for closer collaboration and capacity to act when it comes to collective defense, in order to improve the EU's ability to respond to crises.