As Syria becomes more integrated into the international market, the country's arts scene is also changing. With the help of galleries and auction houses, more Syrian artists are selling their work to foreign buyers. 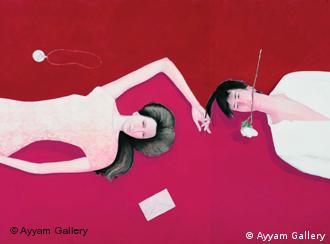 For years, the Syrian government dominated the local arts scene. Damascus regulated arts education and served as the top buyer of work by many artists.

Now, as the country's economy slowly shakes off its socialist constraints, the art market has been effectively privatized - and Western collectors hungry for something new are spending more on Middle Eastern art.

Several high-end contemporary art galleries have opened in Damascus in the past five years, and their connections to affluent international collectors and auction houses have opened new and unprecedented channels for Syrian art. This has triggered a major boost in the value of the country's fine art.

"Over the past four years, the average price of a medium-sized work has appreciated 400 percent, " said Khaled Samawi, owner and founder of Ayyam Gallery, located on the chic Chile Street in Damascus. "Today, they would sell for between $10,000 and $15,000 apiece."

Ayyam is perhaps the most successful of the new galleries in Damascus. Since it opened its doors in 2006, it has increased its stable of artists from five to 20 and established galleries in Beirut and Dubai.

Exhibitions there attract members of the new gallery scene from the capital city's upper crust.

"There are a lot of families now starting to buy art in Syria," said Waref Arabi-Katei, a lawyer who visited the gallery for the first time in hopes of purchasing his first piece. "If I think something is really good here, I'll buy it."

Collectors from around the Middle East are now turned on to Syrian art, bolstered both by a fascination for a country relatively isolated for decades and, more importantly, depressed price tags. Much of Syrian contemporary art still remains at some 50 percent below its appropriate value, Samawi said.

But interest in Syrian art is not confined to the Arab world. The growing popularity of Middle Eastern art on a global scale has drawn collectors from China to France.

Ayyam has organized a number of successful art fairs in cities around the world in recent years, including Basel and Paris. Myriam Jakiche, the gallery's director, said these shows and international media have been instrumental in helping maximize public exposure for both the gallery and its artists. 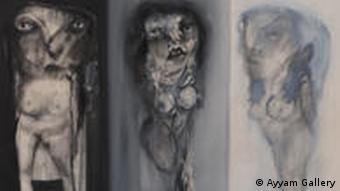 "We try our best to communicate with them and to let them know that we exist, and that this region has a lot of potential and a lot of great art that should be seen and appreciated," she said.

But there are still some challenges. Jakiche said some artists have trouble promoting themselves and their work, and many galleries in the region are still working locally, not internationally.

Meanwhile, Ayyam has taken a global view of the art market. "Our market is very international, it's not local," Jakiche said. "We do have local collectors, but we sell a lot [abroad], mainly to Europe."

As more buyers begin to look at Middle Eastern art as an investment, demand is on the rise, she said.

The Syrian art renaissance is underscored by growth in the regional art market. Global art houses like Christie's and Sotheby's have opened regional offices in Dubai over the past five years. A Christie's auction on April 27 features 125 sculptures and paintings by a range of famous and lesser-known artists from Syria, Lebanon, Iran and other countries in the region.

"We are delighted to include works by many new artists in our upcoming sale, reinforcing our commitment to developing the market in the region and demonstrating a stronger focus on contemporary art from the region, which will appeal to the international market," Christie's Dubai head of sales William Lawries said in a statement.

This institutional commitment to the region is paying dividends, not least for the young Syrian artists who know how to cater to the tastes of the increasing number of international collectors who court them.

"Money has helped me become more professional in my art, because it gives me some comfort and time," said Kais Salman, 33, a member of Syria's new generation of enfants terribles.

In his spacious studio overlooking Damascus, he is working on a series of impressionistic portraits of women - a study of how women are being increasingly commodified by modern Syrian society, he said. Unlike his predecessors, the growth in the value of his art - up 500 percent in value in five years - allows him to dedicate all of his time to his creative pursuits, without having to work a job on the side.

Art and the free market

Not everyone is comfortable with all aspects of Syria's new-found arts gusto. The scene has expanded quickly, but it remains entirely unregulated.

Samia Halaby is a New York-based Palestinian artist and former art professor at Yale University's School of Art who, as an artist, has benefited from the bump in Syrian art. She is represented by Ayyam gallery. Still, she sees some danger in the rapid changes happening in Syria.

"What's happening to Syria is not necessarily a good thing," she said recently over lunch in a Beirut cafe "Syria is being forced open and in this process, it could be raped."

Younger artists with exposure to creative tastes and trends outside of Syria, like Kais Salman, are benefitting most from Syria's changing arts scene. Yet while the younger generation is meeting with fortunes their predecessors never dreamed of, the rift between young and old is growing.

To foster a creative continuum between the generations, the Syrian government has launched a new project, providing local sculptors with stone and a work space in the Baramka section of the Barada river, in the heart of the capital Damascus. Younger artists like Kamar Aamer, 22, is involved in the effort, as is Mustafa Ali, a veteran sculptor famous throughout the Middle East.

Until recently, such intergenerational arts initiatives were unnecessary in Syria. Within the country's closed socialist system, the state was the main educator in the arts, and younger artists interacted with older colleagues through a state-sponsored system of tutelage.

But some members of Syria's elder generation of artists, like 54-year-old watercolorist Etab Hreib, feel that things have only gotten worse.

"Now, the arts have become like a market," she said, surrounded by piles of unsold canvases in her Damascus studio. "The galleries which are responsible for these artists don't care if the artist is good or bad. They don't care about art as a whole. All they care about is if it sells or not."

As art prices in Damascus skyrocket, the value of Hreib's art has remained the same. She sells less and less every year and has to work as an art teacher and a set designer for television to support herself.

But Khaled Samawi of Ayyam Gallery is unapologetic regarding the revolution in the local arts market caused by his and other galleries. Syrian art, much like Syria, he said, is becoming integrated into the larger global market – and those who are not happy with that shift will be left behind.

"What's happening now is the creation of contemporary Syrian art," he said. "And it's very different from what the older generation is doing."

An extensive collection of Islamic artwork is making its way around the globe. Its organizers hope that it will arouse an interest in Islamic culture and foster understanding between Muslims and the western world. (21.03.2010)

Three top German art museums have agreed to lend their paintings to Dubai on the shores of the Persian Gulf, where a citadel of high culture is planned using the emirate's vast oil wealth. (29.05.2008)

When the economy is shaky, art collectors turn their attention to works sure to be sound investments: Matisse, Raphael, and even Warhol. That's bad news for contemporary artists, but at least the market is afloat. (19.01.2010)

Find out more about Syrian Art

Listen to the report on Syrian Art

A Berlin exhibition explores the buzzing heyday of Beirut's arts scene in the 1960s, and how it was cut short by the darkness of the Lebanese Civil War.

The Serbian artist is redesigning her legendary 2010 performance "The Artist is Present," and will auction tickets to the installation at the Sean Kelly gallery in New York. Proceeds will go to a charity for Ukraine.