Although the coronavirus lockdown in France is still underway, construction work on the iconic cathedral will soon restart. President Macron aims to reopen Notre Dame to the public in five years.

The entire world held its breath on April 15 last year as flames engulfed much of the Notre Dame cathedral — one of the most recognized symbols of Paris. Commentators on live TV showed how the fire brigade tried desperately to save whatever it could. 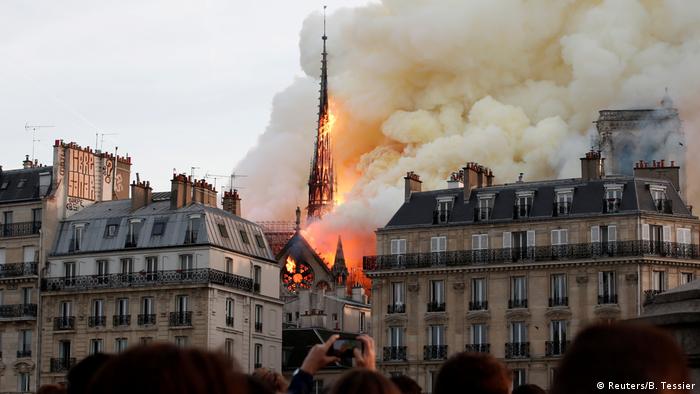 The spire of Notre Dame collapsed after the blaze

"And I want it to be completed in five years," he added.

Architects, engineers, archeologists, scientists and art historians have been busy analyzing the full extent of the damage sustained by the 850-year-old edifice ever since those words were uttered.

Geologist Jean-Didier Mertz has been a consultant for the restoration of Notre Dame from the beginning — along with his team at "Laboratoire de recherche des monuments historiques" (LRMH), one of the most renowned architectural research institutes in France.

His laboratory in the suburb of Champs-sur-Marne, located about 30 miles (50 kilometers) outside central Paris, is analyzing bricks salvaged from the blaze. It's obvious where the fire left its traces: Some have dark marking all over them, coming from molten lead. No one is supposed to touch or move these stones while Mertz assesses the damage. How well did these bricks hold up against the inferno? How bad is the damage? Could they be reused in the restoration process?

"These quarries (where the original building materials were taken from) no longer exist today," he tells DW. "That's why we hope to find other quarries that mine identical building materials. And another objective of our examination is to ascertain the quality of the bricks that still remain in the cathedral."

This is why Mertz is looking closely at the type of mortar that was used when Notre Dame was first erected. "It's 850 years old and has managed to survive for centuries. We want to learn what its components are, so we can recreate it using the same methods as back then." 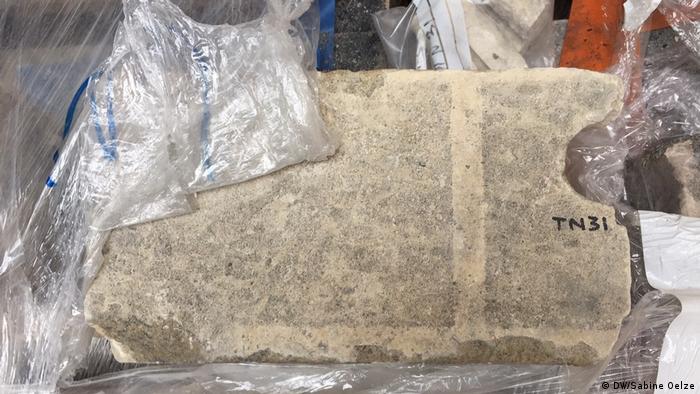 Experts at the beginning of a long road

LRMH has experts all over France — from geologists to microbiologists to chemical engineers. But since the inferno of Notre Dame they've all been focusing exclusively on the damaged cathedral.

They're part of a large team that is tasked with protecting, preserving and restoring historical monuments using their scientific know-how. These experts are used to dealing with all kinds of materials such as bricks, wood, concrete, metal, and even textiles, making them the go-to institute when it comes to restoring an important monument in a holistic manner. They're known for their performance in this niche area — but in the case of Notre Dame, Mertz says that regrettably, "We cannot deliver any final results yet at this point."

Currently, LRMH is still in the early stages of the rebuilding process. It will first issue an instructional guide on how restoration experts are to clean the surviving bricks with due care: "For example, they can't just scratch the lead off the bricks. We could lose important information if they went about it like that."

Each brick a treasure

That would be a straightforward task if the number of bricks that needed to be treated so delicately was just in the hundreds.

However, there are 800 palettes piled up with such bricks currently stored in front of Notre Dame alone. Each single lump of debris is to be handled with the utmost care when it comes to a historical monument of such importance. Not a speck will end up in the trash; everything is cataloged, analyzed and preserved. 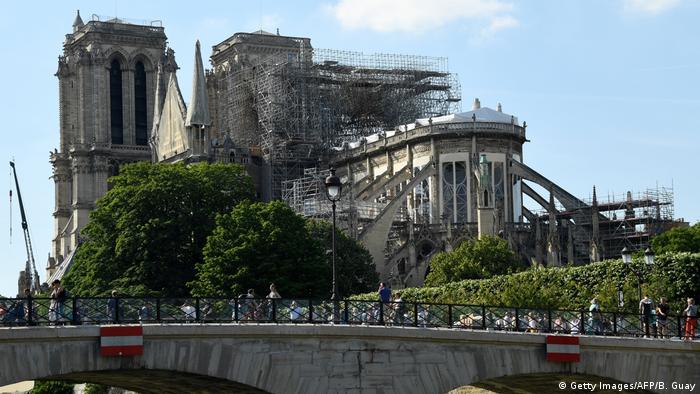 This, however, doesn't necessarily mean that all the bricks will indeed eventually be reused in the rebuilding process. That remains uncertain for the time being, says Mertz, but he emphasizes that he and his team have learned new things about the cathedral during their work: "There have been a number of surprises, especially in terms of architecture."

Mertz explains that the original design featured double arches to carry the spire, which was only added to the cathedral in the 19th century. Such structural secrets of Notre Dame are exciting news for the scientists on Mertz's team. The more they learn about the past of the building, however, the more they need to consider when it comes to its future.

One of the major problems encountered in the year since the fire is how to deal with the issue of lead. The roof of the structure was covered in more than 200 tons of the substance, and all of it melted during the blaze. There's an additional 250 tons of lead from the destroyed spire, built in the 19th century by the architect Eugene Viollet-le-Duc. The site even had to be briefly evacuated over claims that workers could suffer lead poisoning.

Read more: Paris streets near Notre Dame to be decontaminated from lead

Much was salvaged: With the flames still raging, firefighters heroically removed whatever they could. Nine days after the fire, experts also began removing the stained-glass windows — a laborious process as Notre Dame features almost 1,000 square meters (10,760 square feet) of them. Where for centuries there were once colorful windows, now there's nothing but empty space.

But those windows are also affected by molten lead, says Claudine Loisel, a chemical scientist and expert for stained glass at LRMH. They are in fact so poisonous that she has to wear a mask and special goggles to examine them.

Toxic chemicals aside, the windows did survive in a decent state, she adds — initial fears that they could be destroyed by thermal shock during the fire notwithstanding.

"When we saw that the windows weren't damaged and that the glass wouldn't fall apart into thousands of little broken fragments, we were all overjoyed," she told DW. 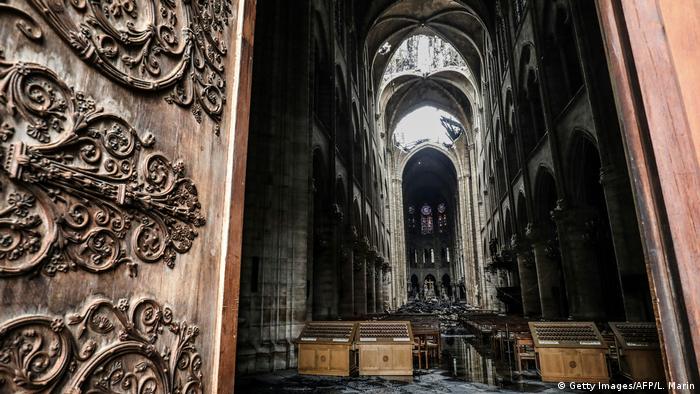 One day after the blaze, experts entered the cathedral for the first time

While the stained glass windows might be salvaged, doubts remain about the structural integrity of the massive monument itself, with rumors in Paris saying that the gothic cathedral could still collapse

The greatest challenge in establishing the static condition of the structure is the fact that scaffolding from before the blaze still remains on part of the building. To safely remove what remains of it — parts of it also melted and clumped together during the fire — all the beams at the top of the nave would first have to be fortified.

The weather conditions for many months after the fire did not allow for such a major operation to begin however. Now that the weather's been more lenient, the corona crisis is slowing down any further progress. For the time being, Macron's 5-year plan would appear to be off the agenda. 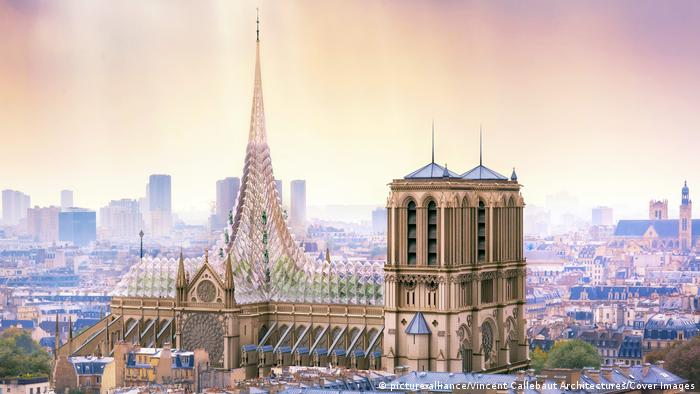 Ambitious designs for an uncertain future

Nevertheless, numerous architects, including some luminaries, have come forward with design ideas for the new Notre Dame. Many of them focus on the roof. Some envision a glass roof, others an urban green space. One architect has even floated the idea of a swimming pool atop the cathedral.

Whether any of those ideas become reality is unknown; the government tender for the architectural design of the restored cathedral is due to be tabled in June 2020 — if the economic aftershock of the novel coronavirus doesn't throw another curveball.

Once a final decision is taken in terms of design, restoration work is expected to start in earnest in 2021. Money, at least, doesn't appear to be an issue: nearly €1 billion ($1.1 billion) has already been donated to the cause by 320,000 people and organizations around the globe.

Aline Magnien, director of LRMH, says she believes the Notre Dame cathedral will eventually be rebuilt in a manner that reflects "a great deal of respect towards its history and purpose and will rise again in new splendor."

On April 15, 2020, the first anniversary after the massive fire, President Emmanuel Macron reaffirmed that Notre Dame would reopen in five years. Restoration work on the  cathedral is scheduled to begin in 2021, with plenty of funding to that end. Almost €1 billion ($1.1 billion) from around 320,000 donors will go towards reconstruction.

Yet, opening a construction site during a pandemic is no easy feat; strict hygiene and safety regulations have had to be put into place. As of Monday, April 27, only 10 workers are allowed on site, reports French paper Le Figaro. On May 4, 50 workers may return to the construction site. Originally, 170 people worked there.

The LRMH was also forced to stop its work during the lockdown. However, its scientists will be able to return to the lab in two weeks.