Ground has been broken on the 1,200-kilometer Nord Stream pipeline, stretching from Russia to eastern Germany. The route is meant to improve energy security for Europe, but there are some problems it leaves unsolved. 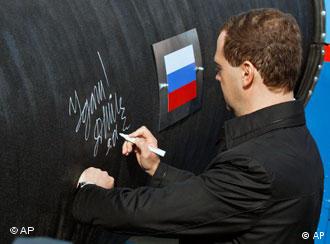 Russian President Dmitry Medvedev on Friday launched construction of the Nord Stream gas pipeline that will link Russia and Germany via the Baltic Sea and supply the European Union with Russian gas.

Medvedev watched the pipeline being ceremonially welded in the Portovaya bay around 60 kilometres (37 miles) from Vyborg in northeastern Russia.

In an opening speech, he called the launch a "remarkable event," saying the pipeline would assure "energy security" in Europe and "reasonable and acceptable prices."

He chalked "Good Luck" on the pipeline, decorated with Russian and German flags.

Gerhard Schroeder, former German chancellor and current chairman and lobbyist for the Nord Stream pipeline, has hailed the project as a way to secure energy supplies in central and western Europe.

"Demand is going to rise, and that's why it's common-sense to have access to the most important supplier," he said.

"Russia was also an energy supplier during the Cold War, and we never had problems with the security of supply. And I'm positive that it will stay that way in the future."

Nord Stream is to connect the Russian town of Vyborg, near the Finnish border, with the northeastern German state of Mecklenburg-Western Pomerania.

The pipeline's route through the Baltic Sea is meant to be an alternative to existing routes that go through Ukraine, where disagreements with Moscow in the past have cut off gas flows to western Europe.

It is scheduled to start operation in 2011, when it would transport about 27.5 billion cubic meters of gas. That number would be doubled by 2012.

Bumps along the road

The Nord Stream consortium has jumped several hurdles on the way to construction. Last month, environmentalists voiced concern over the start of construction coinciding with the spawning season of herring in the western Baltic Sea.

Project leaders avoided crisis by shifting the start of construction to another portion of the pipeline, and waiting until after the spawning season to start building on the western side. 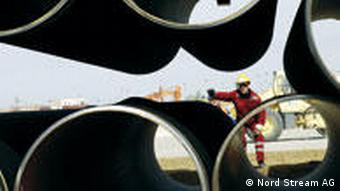 The project has been a bureaucratic and financial challenge

The pipeline's route also passes through Russian, Finnish, Swedish, Danish and German territorial waters, leaving a long list of bureaucratic approvals, the last of which was completed in February.

And only recently did the project secure full financing for its estimated 7.5 billion euros ($10 billion) cost thanks to a loan by 27 banks for 3.9 billion euros.

Critics of the Nord Stream project say the pipeline does not solve Europe's problem of heavy dependence on Russian gas, and the European Union has withheld support in favor of Nord Stream's competitor, the Nabucco pipeline.

"First of all it reduces the technology dependence through another pipeline, and second of all it opens us up to a new region with new partners, and that will decisively lower our dependence," he said.

Nabucco would start in Turkey and run south of the Black Sea to eventually reach Austria. It could potentially bring gas from alternative suppliers as far as Iraq, Azerbaijan and Turkmenistan, where investors in the project travel regularly.

But no supply contracts for Nabucco have yet been signed, leaving the project far behind its Russian competitors.

The International Energy Agency predicts that western Europe will need to import 200 billion cubic meters of gas by the year 2030, which would leave room for both Nabucco, Nord Stream and its sister project South Stream.

But if the growing use of alternative energies keeps natural gas demand from increasing, as some predict, then both Russia and Gazprom will have the competitive advantage.