Russia and Turkey agree on South Stream pipeline project | Europe| News and current affairs from around the continent | DW | 06.08.2009

Russia has signed an agreement with Turkey to build the South Stream undersea gas pipeline in Turkish waters. The deal comes one month after Turkey signed transit accords for the rival European-backed Nabucco pipeline. 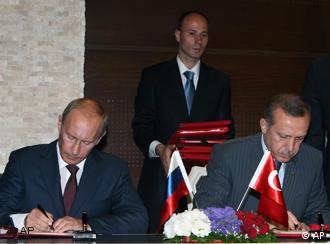 Russian Prime Minister Vladimir Putin and his Turkish counterpart Recep Tayyip Erdogan signed the agreement in Ankara on Thursday. The deal will allow Russia to construct part of the South Stream pipeline beneath Turkish waters in the Black Sea. The South Stream pipeline is to run from Russia to Bulgaria, delivering natural gas to the European Union. Russian Deputy Prime Minister Igor Sechin has said that construction could begin in November 2010 and is due to be completed by 2020.

Circumventing Kiev is the goal

Russia, which supplies one-fourth of Europe's natural gas, wants to speed up construction of alternative gas supply routes to bypass Ukraine and other former Soviet states. Without Turkey's permission, the Kremlin would have been forced to build the South Stream pipeline through the Black Sea waters of Ukraine, with which it has had bitter rows over gas pricing.

Disputes between Moscow and Kiev over transit payments in recent years have repeatedly interrupted gas deliveries to Europe. This has angered European leaders who, in turn, have questioned Russia's trustworthiness as a business partner. 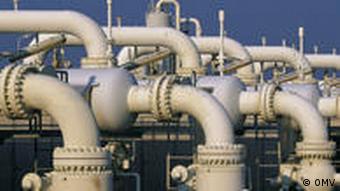 Many European leaders, therefore, favor the EU-backed Nabucco gas pipeline project across Turkey because it reduces Europe's reliance on Russian gas. On July 13, Ankara and four European nations signed transit agreements for completing the Nabucco pipeline, which will draw on gas reserves in the Caspian Sea and Central Asia.

For his part, Putin said he hoped the South Stream pipeline will help maintain Russia's energy dominance in Europe. He insisted that the South Stream project is an alternative, and not a rival, to the Nabucco gas pipeline. "It is vital to European energy security," he said.

The EU's executive, the European Commission, also said that it does not consider South Stream a threat. “It's a complementary initiative to projects like Nabucco", said EU spokesman Martin Selmayr.

Turkey is the third largest consumer of Russian gas after Germany and Italy.