Constrained and tamed: Will the Elbe be deepened again? | Environment | All topics from climate change to conservation | DW | 08.02.2017

Constrained and tamed: Will the Elbe be deepened again?

A court in Germany will decide whether Hamburg's Elbe River should be deepened to allow mega freighters to more easily reach the inland port. Environmentalists filed a lawsuit against the move. Now, it's verdict time. 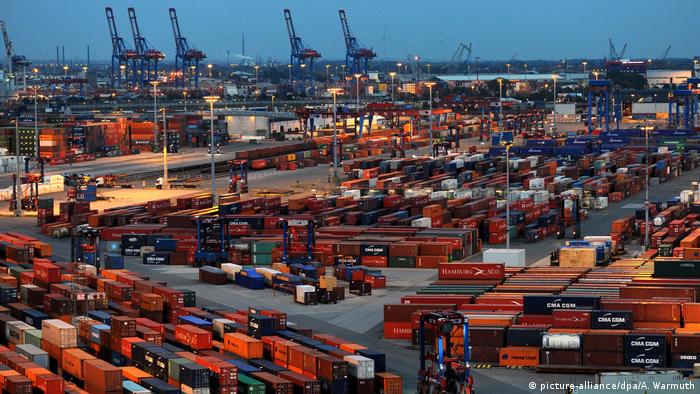 "Finally," says Axel Goderath, "finally the long wait is coming to an end." For more than a decade the banker and supporter of the citizens' initiative "Hamburg for the Elbe" has been involved with the issue of further deepening the river.

The city state of Hamburg, with the support of federal government, wants to deepen the Elbe in the area between the container terminal Altenwerder and Cuxhaven, where the river intersects with the North Sea. The mega-project at Germany's largest river mouth would be the ninth such carving-out of the Elbe since 1880. Container ships are getting bigger and bigger. But for the ocean giants, the river Elbe becomes a bottleneck. Hamburg, also known as "the gateway to the world," is not as close to the sea as its central European competitors Rotterdam and Antwerp. But this city, which was once a hub of the Hanseatic League, was founded on freight. Advocates and opponents are fighting for every single centimeter.

It's a question of excavation or conservation, economy or ecology. A lot of facts, as well as strong emotions.

That's why officials do not speak of "deepening," but prefer to call it "passage adjustment." That sounds more innocuous.

The environmental protection organization WWF describes the possible expansion as "undersea deforestation." Should the shoreline of the river have to be paved, it would destroy natural salt marshes and rare tidal floodplain forests, along with flora and fauna.

An endangered plant species called the "Schierlingswasserfenchel" (Oenanthe coniodes) which in Europe only grows at the mouth of the Elbe, would be condemned to extinction. And in the summer, anglers and local residents continue to observe dead fish. At higher temperatures and without light, the algae in deeper regions deteriorate.

For more than ten years, the affected people, associations and municipalities have been in the fight with authorities, politicians, the Hamburg senate and business representatives.

The European Commission gave a vague statement in 2011, saying "the project can be carried out for prevailing reasons of public interest, even if the assessment shows the plan has a negative impact on the surrounding areas."

The environmental organizations BUND (Friends of the Earth Germany) and NABU (Nature and Biodiversity Conservation Union), who have filed a lawsuit against the project, have taken a look at these surrounding areas.

In court, there will be no negotiation on the economic aspects. The judges are not concerned with the expectations of the competitiveness of the port. At the moment, 8.8 million containers are handled at the port per year and that could increase to 13 million. There are also projections that if the dredging project goes forward, Hamburg could handle some 25 million containers per year.

Axel Goderath and his fellow members of "Hamburg for the Elbe" will be there when the Federal Administrative Court in Leipzig announces on Thursday (9.2.2017) whether the project will be approved.

Hamburg as a logistics hub

There is no doubt about the economic role of the port: more than a tenth of all European container handling takes place at the Elbe terminals. Only Rotterdam is higher on the EU ranking list. But the port is dependent on the global economy and especially on the economic growth of Asian countries. 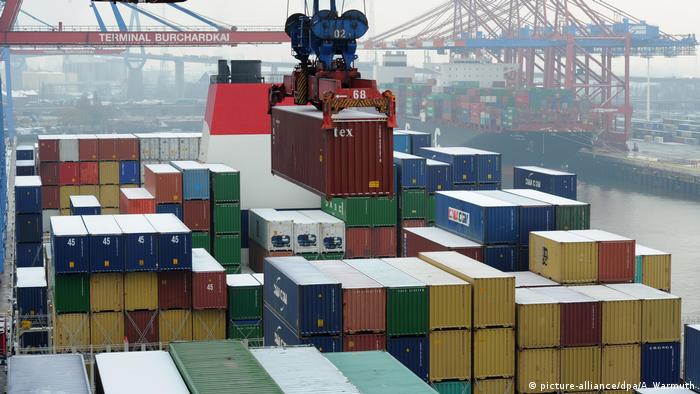 The biggest container ship in the world at the time: The CMA CGM Marco Polo in Hamburg in 2012

"The deepening of the river Elbe and improved connections with the surrounding areas are urgently needed," said Professor Henning Vöpel from the Hamburg World Economic Institute, HWWI. "Without the deepening, the container transport will move to Wilhelmshaven, Rotterdam or Genoa," the HWWI chief told the "Abendblatt" newspaper.

Theoretically, the North German ports of Hamburg and the JadeWeserPort in Wilhelmshaven could work together. Wilhelmshaven is able to accommodate even the largest ships and is not that far away from Hamburg. However, as a city state, Hamburg is politically independent and has rejected such cooperation.

In earlier court cases, the Federal Administrative Court has dealt with the effects of the construction of the Elbe on the river itself and flood. At that time the judges indicated that they consider an expansion indispensable - subject to conditions.

'Harbor subsidized above all'

Sabine Klingemann from the citizens' initiative "Hamburg for the Elbe" once passionately sailed on the Elbe. She is annoyed that "the port in Hamburg is put above all and is being subsidized, while in other areas such as social welfare, there are constant cuts."

In Hamburg, the Elbe and port are omnipresent - the city has grown around them. At least 640 million euros is planned for the deepening of about one meter. "If you calculate the running costs, the expansion of the rail network and roads so that trucks can transport the containers into the country, the costs will raise to 8 billion euros," Klingemann said. Environmentalists fear an increase in storm surges if the water flows even faster and rises higher at high tide. Flood protection measures would be needed. The port area would have to be expanded.

The Elbe already has to be excavated regularly to remove the tens of millions of cubic meters of sludge that is swept from the North Sea into the inland waters. The costs for this amounted to 132 million euros in 2015. That sediment is a habitat for crabs, worms, mussels and sea snails.

Horst Domnik's heart also beats for the Elbe, but against the expansion. His father was a ship builder.

"In the 1960s this place was swarming with seafarers," he said. "Around 40,000 of them worked here. But that's history now. No one protested against the automation, digitalization and emigration. And there are hardly any shipyards. The industry has voluntarily surrendered Hamburg."

As a captain, Domnik steered ships on the Elbe. The ship owners had earlier built their ships according to the size of the river and the port. But now it is they who determine how the ports and waterways are designed and built.

Furthermore, the captain fears that accidents will increase and the insurance companies could refuse to insure the passages. "With Wilhelmshaven, Bremerhaven and the Polish port of Gdansk, there are alternatives to Hamburg," said Domnik.

Environmental groups are in court appealing plans to deepen the Elbe River. The dredging will allow bigger container ships to reach Hamburg's port but local farmers say that it is going to affect water quality adversely. (16.07.2014)