There is renewed political turmoil in Kosovo after the country's top court ruled Monday that the recent election of the country's new president was unconstitutional. New parliamentary elections may now also be necessary. 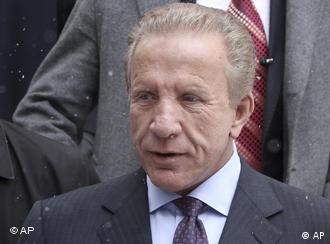 Pacolli was president for just over a month

In a 7-2 vote, Kosovo's top court ruled Monday that the February 22 election of the country's new president was unconstitutional.

"Behgjet Pacolli was elected in an unconstitutional procedure," the court said in a statement posted on its website. It did not elaborate further on the ruling. The decision follows a joint appeal filed earlier this month by Kosovo's leading opposition parties.

No date has been set for a new election.

Pacolli, a Kosovan-Swiss business tycoon, was the only presidential candidate after his party, the New Kosovo Alliance (AKR) joined forces with the Democratic Party of Kosovo (PDK) of Prime Minister Hashim Thaci. Pacolli's candidacy was part of a coalition deal with the PDK, although the AKR only has eight seats in parliament.

Opposition parties boycotted the February vote, citing Pacolli's business ties with Russia, which is opposed to Kosovo's independence. Opposition lawmakers walked out of the session, leaving only 67 deputies in the 120-seat body when the vote was cast.

In addition, it is not yet clear whether new a parliamentary election will now be necessary.

Kosovo's parliament gave Thaci a second term as prime minister on the same day Pacolli was elected president. As a result, Thaci's appointment may also be invalid.

Kosovo has been in political turmoil since last September, when President Fatmir Sejdiu, of the Democratic League of Kosovo (LDK), was forced to quit after the constitutional court ruled that he could not be both president and leader of the LDK.

Sejdiu's resignation led to the fall of the government and early elections in December, which were won by Thaci and marred by a number of irregularities.

Kosovo declared its independence from Serbia in 2008 but has been struggling economically. The country is trying to attract EU investment to reduce an unemployment rate of 45 percent.

In a first-of-its-kind gathering, delegates from Serbia and Kosovo are in Brussels for two days of talks aimed at smoothing relations between the neighboring states three years after Kosovo's declaration of independence. (09.03.2011)

Under cloud of chaos, Kosovo celebrates three years of independence

As Kosovo entered its fourth year of independence, citizens celebrated their hard-fought freedom from Serbia. But Kosovo's lack of government and a scandal surrounding the prime minister cast a shadow over the day. (17.02.2011)