Former US spy agency Edward Snowden was a "disgruntled employee" and not a "principled whistleblower," according to a report from Congress. Civil liberty groups advocate a presidential pardon for the exiled 33 year old. 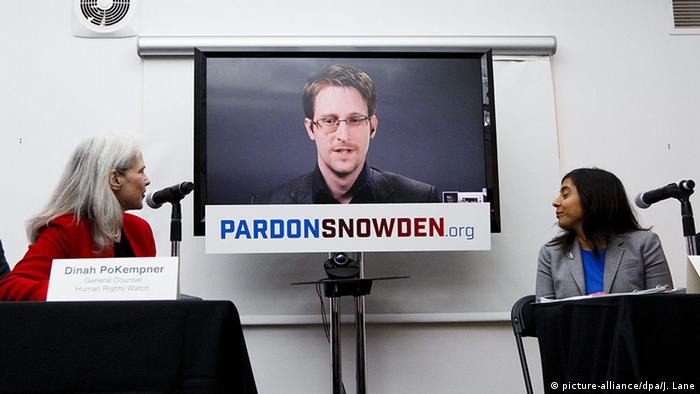 Amnesty International, the ACLU and Human Rights Watch have launched a campaign demanding a presidential pardon for Edward Snowden. It coincides with the upcoming release of a biopic directed by Oliver Stone. (14.09.2016)

Oliver Stone didn't get funding for "Snowden" in the US. In Germany, he found both financial support and filming locations for his political thriller, but its release is low-key. Is the US trying to keep it under wraps? (15.09.2016)

A summary of a two-year report prepared by the Republican-controlled House Intelligence Committee depicted the former National Security Agency contractor as "a disgruntled employee who had frequent conflicts with his managers and was reprimanded just weeks before he began illegally downloading classified documents."

The report also finds that Snowden "did not voice such concerns to any oversight officials" at the NSA, and he should not be considered a whistleblower protected under law.

"He put our service members and the American people at risk after perceived slights by his superiors," Republican Congressman Devin Nunes of California, chairman of the committee, said in a statement. "In light of his long list of exaggerations and outright fabrications detailed in this report, no one should take him at his word."

Although the 36-page report is classified, officials released a shorter, unclassified version on Thursday a day ahead of Friday's US premier of an Oliver Stone drama based on the 33-year-old contractor's exploits.

It also set off a fierce debate that pitted civil libertarians concerned about privacy against more hawkish lawmakers fearful about losing counterterrorism tools.

Now Snowden's supporters are seeking a presidential pardon because he says he helped his country by revealing secret domestic surveillance programs.

Ben Wizner, Snowden's attorney at the American Civil Liberties Union said it was an attempt to discredit a "genuine American hero."

"In a more candid moment, the NSA's former deputy director, who was directly involved in the government's investigation, explicitly said he didn't believe Snowden had cooperated with either China or Russia."

All members of the Republican-led committee sent a bipartisan letter to President Barack Obama urging him not to pardon Snowden, which would drop all criminal charges.

Speaking by video link from his exile in Moscow, Snowden said Wednesday that whistleblowing "is democracy's safeguard of last resort, the one on which we rely when all other checks and balances have failed and the public has no idea what's going on behind closed doors."

His remarks came during an address of a New York City news conference where advocates from the American Civil Liberties Union, Human Rights Watch and Amnesty International announced an online petition drive to urge President Obama to pardon Snowden before he leaves office.

But White House spokesman Josh Earnest dismissed pressure for a pardon on Wednesday, saying Snowden would enjoy legal due process at a trial in the United States, where he faces up to 30 years in prison for espionage and theft of state secrets.

"His conduct put American lives at risk and it risked American national security," he told reporters. "And that's why the policy of the Obama administration is that Mr. Snowden should return to the United States and face the very serious charges that he's facing."