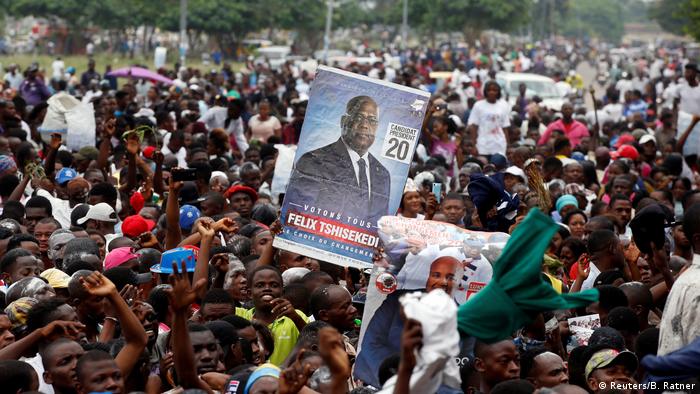 Celebrations for Tshisedeki outside the opposition UDPS party headquarters in Kinshasa

Catholic leaders in the Democratic Republic of Congo (DRC) on Thursday said Tshisekedi's surprise win — declared pre-dawn by the mineral-rich nation's electoral commission — did not match tallies compiled by 40,000 monitors deployed by the church for the 30 December election.

Diplomatic sources said the tallies pointed to Fayulu as the winner, although the church via its Episcopal Conference of the Democratic Republic of Congo (CENCO) itself did not name a presumed winner.

Read more: who is Felix Tshisekedi?

"The result of the presidential election as published by CENI [DR Congo's election commission] does not correspond with the data collected by our observer mission from polling stations and counting centers," said Father Donatien Nshole, a  spokesman for CENCO, which represents the country's Catholic bishops. who have long pressed for the departure of President Joseph Kabila. 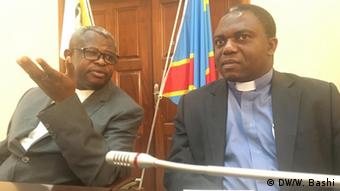 Celebrating Tshisekedi supporters converged on his party headquarters in Kinshasa, DR Congo's capital, where the mood was otherwise reported to be largely somber amid memories of elections in 2006 and 2011 that were marred by bloodshed.

"This is the coronation of a lifetime," said Rubens Mikindo, deputy secretary-general of Tshisekedi's party, the Union for Democracy and Social Progress (UDPS).

"Today we should no longer see him as an adversary, but rather as a partner for democratic change in our country," Tshisekedi said.

Vital Kamerhe, one of Tshisekedi's supporters, told DW that following the election, DR Congo was among the countries that have seen peaceful turnover of power and that Kabila should receive some credit for that.

"The Congolese people have spoken and we have to respect their choice," Kamerhe said. "The Democratic Republic of Congo is in the group of countries like Ghana and Senegal where a democratic change of power has occurred."

Result 'opposite to what we expected,' says Le Drian

French Foreign Minister Jean-Yves Le Drian said the surprise result was the "opposite to what we expected," based on field observations of the December 30 vote that was marred by voting machine malfunctions and Ebola virus outbreaks.

Protests on Thursday in the western city of Kikwit — a Fayulu stronghold — left dead two civilians and two policemen, with 10 others wounded, said local police.

The election commission issued its result before dawn Thursday, attributing 38.57 percent to Tshisekedi (the son of Congo's late opposition leader Etienne Tschisekedi), who last year broke away from Fayulu.

Fayulu, a former Exxon manager and placed second by the electoral commission on 34.8 percent, asserted Thursday that Tshisekedi had emerged top in a deal engineered by Joseph Kabila, DRC's president since 2001.

Fayulu said the Congolese people were being cheated and called on people to push for his victory.

"I am sticking to my position: This result has nothing to do with reality," Fayulu told DW. "Mr. Tshisekedi was named by Mr. Kabila and we cannot accept a plot against the will of the people. We say that the people need to push for a victory."

Fayulu said the naming of Tshisekedi was the next in a line of stolen elections.

Third-placed on 23.8 percent, Emmanuel Ramazani Shadary, Kabila's preferred successor, congratulated Tshisekedi through a spokesperson, saying his win represented the "will of the people."

South African President Cyril Ramaphosa urged the international community to refrain from speculation and congratulated Congo on its election outcome.

The European Commission said the EU was still awaiting assessments of observer missions. Shortly before the December poll, Congo expelled the EU's ambassador over human rights-related sanctions placed against Shardary.

Sasha Lezhnev, deputy director of the Africa-focused Enough Project, said: "if it looks like the vote was rigged and that Kabila is actually staying in power via a backroom deal, then sanctions and other financial pressure should ensue."

The Democratic Republic Congo, plagued for decades by warfare, has abundant mineral deposits, including coltan sought for mobile phones.

Felix Tshisekedi has won Congo's presidential election, the election commission has announced. Tensions were high ahead of the delayed results from the long-anticipated vote to replace President Joseph Kabila. (10.01.2019)

Results of last week's presidential election in Congo are delayed — another setback for the country's democracy. But pressure from the Catholic Church could incite violence and instability, writes DW’s Isaac Mugabi. (06.01.2019)