Congo at a crossroads: Waiting for election results

People in Congo are nervously waiting for results of the presidential vote. Some fear riots, while others are ready to take part. Fearing unrest, the government has cut off access to the internet. Jonas Gerding reports. 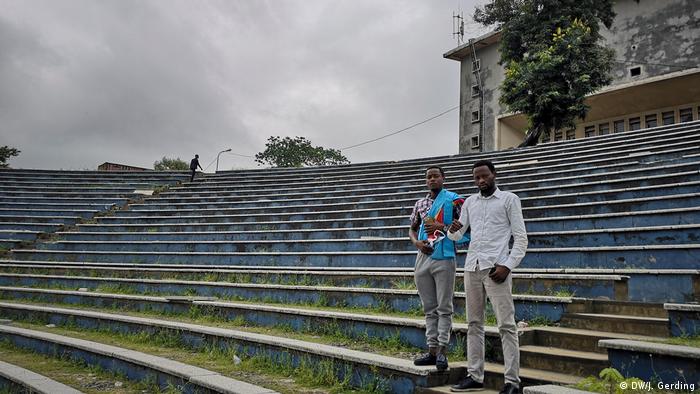 Jacqui Ekodi repeats the same sentence so many times it starts to sound like a warning. "That's not how it's going to be!" she insists.

Her words are addressed to the ruling elite around the outgoing president, Joseph Kabila, who finally allowed elections to take place on December 30 after a two-year delay. Kabila, who took power in 2001, didn't stand for re-election but urged the Congolese people to vote instead for his former interior minister, Emmanuel Ramazani Shadary.

"We don't want them to declare their own president – that's not how it's going to be," Ekodi, 40, repeats belligerently. "Even we, the mamas, will oppose it." Ekodi is a mother of six who sells secondhand clothes on Kinshasa's central market. She says women like her have far too many problems to deal with.

'If Shadary gets in, we'll burn everything down'

Of course, Shadary also has many supporters in this central African country — but they're not as visible. When the provisional results of the presidential election are eventually announced, the younger and poorer sectors of society may protest. The atmosphere here is tense, and that tension could flare up at any time if an opposition candidate doesn't win. 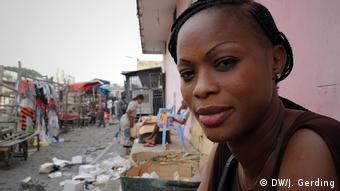 At the entrance to the market, stallholders and customers are engaged in noisy political discussions. "If Shadary gets in, we'll burn everything down," one of them says. It's late afternoon, and with the darkness come the thieves, so most of the vendors are already dismantling their stalls and packing up their wares — clothes, electronics, kitchen implements.

Ekodi, too, has packed away her bags of secondhand clothes. "Last New Year, business was good," she says. "But this year we're not selling anything; as you can see, the market's empty. We've had the election, but nothing's back to normal."

This is mainly on account of the government's latest repressive measures. When the first election results started circulating on social media, it ordered telecommunications providers to suspend text messaging and internet services. 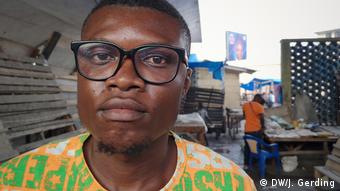 Without the internet, business is slow for Puaty

"We're 100 percent blocked," says 32-year-old Christian Puaty, who's selling eyeglasses at the market — or trying to. "We don't even have any way of carrying out transactions." Puaty often sells lenses and frames over the internet. "Customers call me up and ask me to send a photo, but there's no Facebook and no WhatsApp – how am I supposed to send it?"

Puaty is a trained optician. For years now he's been hoping to find a proper job. "We are suffering, morally and economically. That's why we want change," he says. But what if the winner is not an opposition candidate? "If the result is negative, I advise all young Congolese to take to the streets to demand our rights." Puaty is convinced that Shadary can only get into office if the government rigs the election results on a massive scale.

However, many people assume Shadary will nonetheless be declared the victor. According to statements by the electoral commission, CENI, only 20 percent of the votes have been counted so far. As yet there are no indications as to whether Shadary has won or lost — and CENI insists that's how it should remain, for now.

At a press conference called at short notice on Thursday, the head of the electoral commission, Corneille Nangaa, put election observers in their place: "They come, observe and report. But it's not their job to announce results. Some of them are overstepping their authority," he said.

The announcement was made exactly one hour before the publication of the much-anticipated election report by CENCO, the National Episcopal Conference of Congo. CENCO is the Catholic Church's political representation in Congo, and as such its statements carry weight.

At its press conference, CENCO's general secretary, Donatien Nshole, said Kabila himself had warned CENCO on election day not to publish any results.

Indications from the bishops

It was a delicate balancing act. At its presentation, CENCO intended to show it had gathered enough data to make serious predictions on the outcome of the election. On the day of the vote, it had 40,000 election observers out all over the country. On the other hand, it also had to point out that there were many discrepancies and infringements of the rules, some of which had affected its own work.

The majority of infringements cited by CENCO took place on the day of the election itself, such as polling stations opening too late. However, Nshole stated: "These infringements of the rules were not able to prevent the Congolese people from making a clear choice at the ballot box."

That sounds like someone who knows the election result – and could put pressure on CENI. If the Catholic Church were to contradict the official result of the election authorities, there would be a scandal that could have serious consequences for Congo's fragile stability. 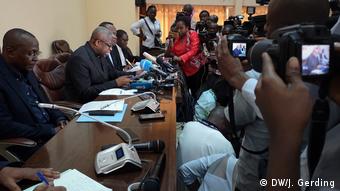 'Not afraid of death'

However, CENCO's announcement is not the only thing that counts, says 25-year-old Patrick Kanyinda. Kanyida is studying civil engineering at the University of Kinshasa, which has around 20,000 students.

"If the voice of the people is hijacked, the students will be the first to take to the streets, that's for sure," he says. "We won't wait for other people's instructions."

Kanyinda is a coordinator of Lucov, one of Congo's many youth movements. Right up to the end, they were demonstrating and campaigning for fair elections, and for Kabila's resignation. They're ready to resist, even if the security forces fire at them with tear gas and live ammunition, as they have done in the past.

"We're not afraid," he said. "Not of death, or of imprisonment. This time, if they deny us political change, we've had enough."

Congo is experiencing its first democratic transition of power. It remains to be seen whether or not this will be peaceful. The potential scenarios could not be more different: Will the people take to the street in pitched battles, or in celebration? The announcement of the victor will decide.

Citizens in the DR Congo have voted in an historic election that will shape the future of the turbulent African country. Delays, irregularities and voting problems threaten the election's credibility. (30.12.2018)

Results for last week's DR Congo presidential election are delayed — another setback for the country's democracy. But pressure from the Catholic Church could incite violence and instability, writes DW’s Isaac Mugabi. (06.01.2019)

President Kabila: Election will go ahead in DR Congo

Speaking to DW, President Joseph Kabila confirmed the election to determine his successor will take place on Sunday after a one-week delay. However, residents of some Ebola-affected areas will have to wait until March. (28.12.2018)