Conflict takes toll on Israeli and Palestinian women | Middle East | News and analysis of events in the Arab world | DW | 17.10.2015

Unlike in previous uprisings, more and more women are participating in protests against the Israeli occupation. But the fighting has also taken its toll on them. 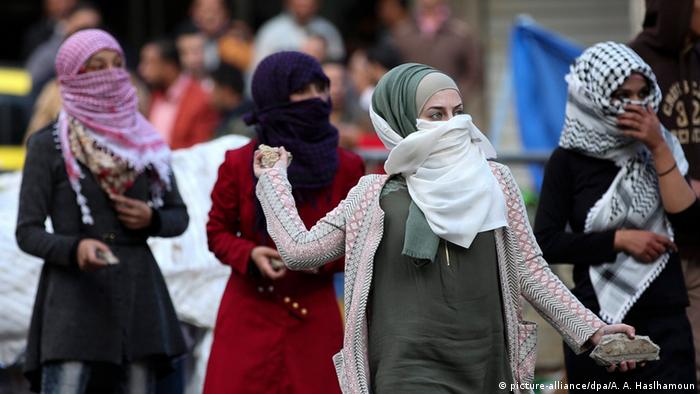 As attacks and standoffs have happened across Israel and the occupied territories, more and more young Palestinian women are participating in protests. Some have even carried out attacks on soldiers and civilians, using kitchen knives, gas balloons or stones. But the fighting has also taken its toll on women.

"In the past I was happy to hear about violent uprisings coming from women," says T., a Palestinian woman who works as an educational consultant in the north of Israel, "but today I know this will not lead us anywhere."

Palestinian women are going through extremely tough times, T. says, especially if they are religious and wear identifying items such as head scarves. She would only speak on the condition that her first initial be used as she has experienced threats and harassment for speaking out in the past. "Any violent action puts us all in danger," she says. "All of a sudden, I am to blame for everything that is happening in Jerusalem."

"Life is simply paused these days, and every insurgency will force me to win people's trust again, to be accepted by them," T. says. "I know my Israeli friends and colleagues must be very afraid of me." 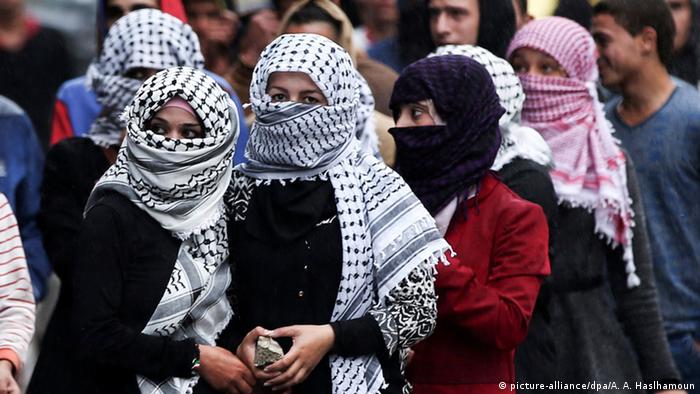 Some Israeli groups, however, are trying to bridge this gap. Thirty-year-old educator Masha Oren-Sapojnikov is one of the admins of Israel's largest feminist group on Facebook, and she is hoping that the world's favorite social media platform might be used to unite people toward a common cause rather than deepen divisions.

"Facebook enables our words to reach every smartphone, every computer," Oren-Sapojnikov says. "We can create a direct, unmediated discourse that resists the hegemony. Women are eventually the ones who have to give birth here, raise children on this land and later on even send them to the army."

Oren-Sapojnikov wants to put an end to the divisions rather than simply minimize cultural and political clashes. "We want to promote more than just coexistence," Oren-Sapojnikov says. "We want to promote mutual life. It may not be very popular, but I believe that the continuation of this conflict, the continuation of the killings, is in fact a patriarchal interest. We can reshuffle the cards, redraw the parties."

T. agrees, saying violent resistance will only bring more violence, although she understands why fellow Palestinians protest in Gaza, the West Bank and Jerusalem. "My problem is that we are going to pay a heavy price for this violence," she says. "Siege, fear, more casualties. I understand the Palestinians in East Jerusalem - they feel the occupation at its highest and they want to resist, but reality shows this was never helpful."

On top of being ineffective for resolving the conflict in the long term, clashes between Israelis and Palestinians eventually reach everyone's homes, Oren-Sapojnikov says: "When the atmosphere becomes more aggressive, this aggression is immediately directed at the weakest parts of society, namely women and children."

"As long as violence is raging outside - it will rage inside as well," Oren-Sapojnikov says. "To think that this will not be directed at us in our own homes is a crucial mistake. The economy is not developing, education is not developing, as long as we invest only in arms and security. The weak and the helpless suffer."

Once women realize that participating in the belligerence works them, Oren-Sapojnikov says, perhaps they will start to connect with one another. 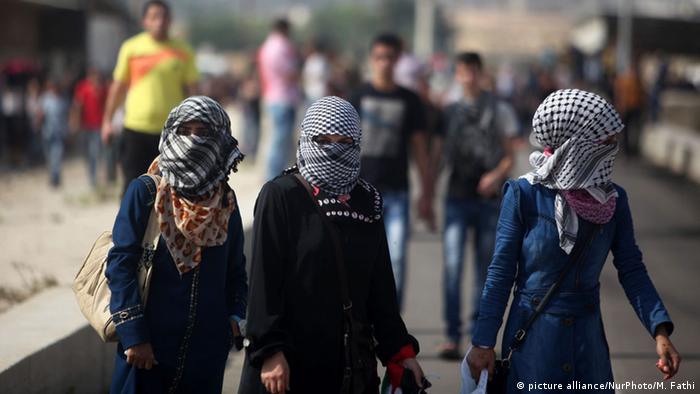 Women take part in a protest in the Gaza Strip

T. believes that there is some hypocrisy in the Palestinian revolt. "What's happening in Jerusalem is not new", she says, "but when you have more casualties than usual everyone wakes up all of a sudden."

"The fact is that the Palestinian Authority is also corrupt, and can be heard only when our children die," T. says. "But what about other times? When they have no money for school, for playgrounds, for food? Why don't we hear from our leaders then?"

As for women's role in this conflict, she prefers to take a more constructive approach: "We have an important role in educating our children that things can be done differently. Everything starts with education."

Israel has rejected an appeal by Palestinians for an international force to protect Al-Aqsa mosque in Jerusalem. On Friday, Israel's military opened fire on protesters in Gaza, killing one and wounding dozens. (16.10.2015)

As violent attacks increase on both sides, Israelis and Palestinians are using social media to spread their message. Facebook and Twitter are being used to circulate words of hate but also calls for peace. (15.10.2015)

No stop to bloodshed between Israelis, Palestinians

Fears of an uprising have continued to mount, more than a week after a new round of violence erupted around Jerusalem. Leaders at the center of the conflict have begun to fire accusations at each other. (12.10.2015)