In January, Ange Postecoglou guided the Australian national side to the country's first piece of silverware. Now, it's time for his team to measure up against the world champions, writes DW's Andre Leslie in Mainz. 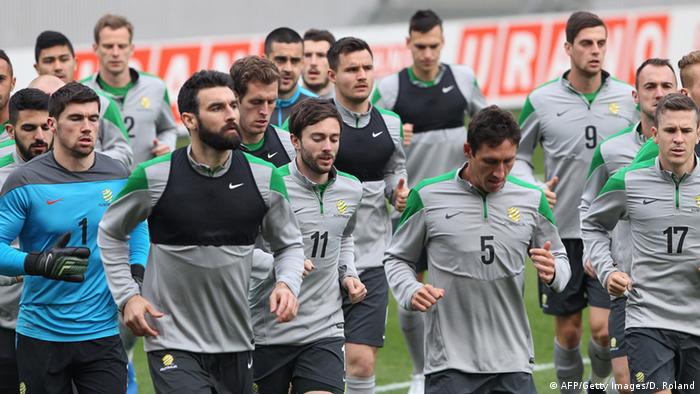 You can sense the confidence of Ange Postecoglou and Mile Jedinak as soon as they walk into the room. For years in Europe the Socceroos have been the tough but very beatable opponents, from far away Down Under. Now, things seem a bit different.

Maybe the Socceroos are really starting to feel at home touring Europe, maybe it's all just show, or maybe it's the confidence borne out of finally winning some silverware at the Asian Cup in January.

“In isolation, what we achieved in Australia is great but if you don't build on it, you miss an opportunity,” says coach Postecoglou at the pre-game press conference in Mainz, in his typical growl.

“We've had great moments before in our football history. We've capitalized on some of them, and some we haven't. Now, we have to make sure that we do.”

Since the 2006 World Cup, Australian football has undeniably been on the up. A scandalous departure at the hands of Italy that year, and then further participation at the following two World Cups, has hardened the team at the top level.

“Over the last 18 months, we have played four or five of the top 10 nations in the world,” Postecoglou said. Postecoglou has improved Australia's fortunes, leading the team to the World Cup in Brazil

“We have never once talked about only stopping our opponents. It's about taking our game to the opposition too, especially in friendly games.” Australian coaches may have said these sort of statements in the past, but did they really believe it like they do now? It seems unlikely.

Time for two in a row

In 2011, in Australia's last game against Germany, the Socceroos won 2-1 in Mönchengladbach. It was well before Postecoglou's time and no-one is talking about that match now in the Australian camp. Instead, they're focusing on building on the momentum from the Asian Cup win.

“For the path that we are on now, this is just the game we need,” Postecoglou said. “We want to push ourselves and measure ourselves against the very best.”

It's a view backed up by the team's captain Mile Jedinak, who currently plays his football in England at Crystal Palace. “These are the games you want to be playing, because Germany is considered the best team in the world.”

But it would be too much to say that the guests are taking the game as a chance to let their hair down. The respect is deep.

“They plan meticulously and they know exactly what they want,” said Jedinak of the German setup. “They are almost the template now, for what other teams are trying to do.”

There's respect also from Postecoglou, who has spent much of his coaching life in Australia. “They have worked to a plan for years now, towards success, and then they got it,” he said. “In my job, that's the sort of thing you admire.”

Löw: 'Australia a sporting country that never gives up'

Both Germany head coach Joachim Löw and captain Bastian Schweinsteiger spoke at a press conference the day before Germany's friendly against Australia. Löw confirmed Manuel Neuer would be rested. (24.03.2015)

Oliver Bierhoff: 'We want to win our EURO 2016 qualifying group'

Ahead of Germany's friendly against the Socceroos on Wednesday, the German team is already looking ahead to a bigger task: getting back on course in their EURO 2016 qualifying campaign. (23.03.2015)