Why are Americans searching for supercycle on Google? | Business | Economy and finance news from a German perspective | DW | 19.02.2021

Why are Americans searching for supercycle on Google?

The interest in the term has been at its highest in more than a decade, according to Google data. Much of that has to do with a certain "Doctor Copper" who is predicting, what else — a supercycle. 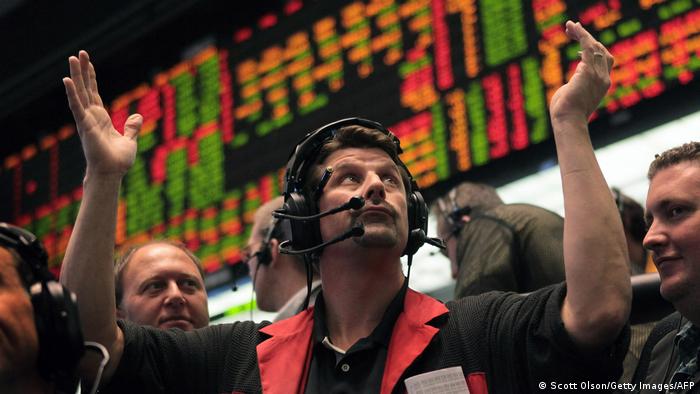 Several traders and bankers are saying a commodity supercycle is underway

A word that was hardly used in recent years is back in vogue: supercycle.

A surge in metal and oil prices has got bankers and traders predicting the onset of a new commodity supercycle, a cycle that would involve a boom in commodity prices followed by a bust over an extended period that could last decades.

Commodity prices have been buoyed by expectations of a strong post-pandemic economic recovery backed by successful vaccine rollouts and massive stimulus spending.

"Financial markets appear convinced that since we are beginning to see the light at the end of the COVID tunnel, a commodity supercycle is upon us," Edward Moya, senior market analyst at OANDA trading group, told DW. "With China leading the global economic recovery, iron ore, copper and crude prices could see much further upside throughout the rest of the year.  China will eventually pass the economic recovery baton to the US and then it will get passed to Europe."

Copper — often referred to as Doctor Copper, an Economics PhD holder in market parlance for its uncanny ability to predict turning points in the global economy — has rallied over 80% since its March lows to around $8,500 per ton, the highest level since 2012. The demand for the base metal, which is used widely from homes to factories and mobile phones to the transmission of electricity, is used to gauge the health of the economy. Other metals, including iron ore and nickel, are also seeing steep price gains.

Oil prices too are experiencing a dream run as traders bet on a vaccine-driven recovery to boost fuel demand. Benchmark crude contract Brent North Sea is trading at a year high while West Texas Intermediate (WTI) futures, the US benchmark, have climbed over 260% since last April when it turned negative.

What's behind the rapid rise in commodity prices?

A supercycle can be defined as an extended period of booming demand for a wide array of commodities, leading to a surge in their prices, followed by a collapse of demand and eventually prices. According to a Bank of Canada report on supercycles, they tend to roughly "coincide with periods of rapid industrialization in the global economy."

The industrialization of the United States from the late 19th through the early 20th century and the postwar reconstruction in Europe and Japan, which saw massive demand for raw materials, led to decadeslong commodity supercycles.

The last century is said to have seen four commodity supercycles with the last one beginning around 1997, powered by rapid economic development in China and other emerging countries such as India, Brazil and Russia.

The supercycle was driven by rapid industrialization and urbanization, especially in China which emerged as the world's factory and the second-largest economy following its accession to the World Trade Organization. It came to an end with a collapse in commodity prices around 2015-16 when China tightened its money taps after years of splurging.

The buzz on Wall Street around a new supercycle can also be seen online, especially in the US – the home to the world's largest stock and commodities exchanges. According to Google Trends data, the interest in the term has been at its highest since the 2008-09 global financial crisis, which marked the beginning of the end of the last commodity supercycle.

Analysts are banking on a green industrial revolution pledged by several countries such as the US and the UK as well as the European Union as part of their post-COVID-19 pandemic stimulus packages to drive commodity prices.

"Investment in the energy transition will be a massive and lasting new driver for commodities — we estimate at least $40 trillion (€33 trillion) will be spent over the next 20 years," said Simon Flowers, chief analyst at energy consultancy Wood Mackenzie." It’s central to the post-pandemic stimulus packages and will carry on well beyond."

The push for greener economies would boost demand for copper and steel to support infrastructure for electrification that would happen and aluminum, nickel, lithium and cobalt for electric vehicles, he told DW.

Goldman Sachs analysts point out how the COVID upheaval, unlike the global financial crisis, is a "crisis of social need," one that would need a social fix like dealing with inequality, climate change and unemployment.

"Oil is an unusual one because there has been a lot of underinvestment for the last half-decade in oil and we may be reaching a squeezed point for oil where demand is still pretty high because we need oil for mobility, but there has not been enough investment," he said.

Too early to call

Flowers, however, says it's too early to say a supercycle is underway, a view echoed by many metal analysts, who expect China's economic recovery to moderate after witnessing a strong post-pandemic rebound and other economies struggle to reopen amid virus mutations.

"But that’s the thing with supercycles. They look obvious with hindsight but are far harder to see at the time," Reuters columnist Andy Home said. "Are we about to experience a new one? Has it already started? The jury is very much out and this being a multiyear supercycle we're talking about, it could be out for some time."