Germany's second-biggest bank Commerzbank, which posted third quarter losses, says it will accept a capital injection of more than 8 billion euros from the government rescue fund in a bid to "stabilize its capital base." 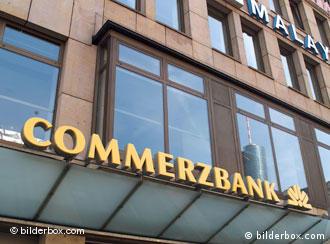 Commerzbank, Germany's second-largest bank, said on Monday it will help itself to a chunk of state aid, asking the government for 8.2 billion euros ($10.5 billion) in cash and 15 billion more in debt guarantees.

The international financial crisis cost the bank 1.1 billion euros in losses from market operations, a statement from the bank said.

"In truth, we have not covered ourselves in glory here. In future, we will have to improve," Commerzbank chairman Martin Blessing said in a statement.

Shares in Commerzbank shot up 6.8 per cent in early trading Monday on news of the capital injection.

Commerzbank made a deal with Germany's Financial Markets Stabilization Fund, or Soffin, to accept a "silent participation" of 8.2 billion euros and the additional option of a guarantee for 15 billion euros in Treasury bonds. 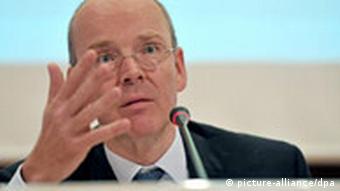 Commerzbank's Blessing: "We welcome the package"

In late October, Germany's Hypo Real Estate Holding became the first private company to tap the government's 500 billion-euro rescue package for financial institutions, which it offered in a bid to help them through the ongoing international credit crisis.

'We welcome the aid package'

Commerzbank's move was "to strengthen its capital base,'' the Frankfurt-based bank said on Monday. The bank had a net loss of 285 million euros in the quarter after earning 339 million euros a year earlier.

"We welcomed the government's aid package from the beginning," Blessing said in a statement. "We're using the instruments made available in the package because it is good for the bank, for its employees, and its customers."

The capital infusion, in the form of a "silent participation," means Berlin will not become an active shareholder in Commerzbank and the cash will go directly towards boosting the bank's so-called Tier1, or core capital.

That means investors' holdings will not be diluted in Commerzbank, which can also use a capital increase as it is acquiring Dresdner Bank from the insurance group Allianz. 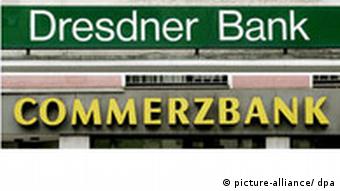 Commerzbank is strained by its Dresdner takeover

The German government welcomed the move, saying it "strengthens the bank and protects shareholders and workers, as well as the German economy's credit supply," a spokesman for the German Finance Ministry, Torsten Albig, told AP news service in Berlin.

The Commerzbank announcement came just a day after its rival Deutsche Bank -- Germany's largest lender --announced once more that it would not help itself to state aid. On Sunday, Nov. 2, Deutsche Bank Chief Josef Ackermann reiterated that he had no plans to take advantage of a government rescue plan.

"Under the current circumstances we will not participate, because we are strong," said Ackermann, whose bank last week reported a third quarter profit in spite of the current economic turmoil. 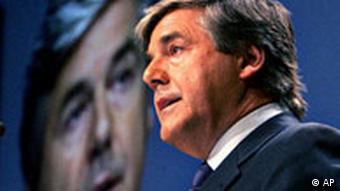 "We need a stable financial system," Ackermann said in an interview with German public broadcaster ZDF. "And those banks that are weaker should be strengthened as quickly as possible."

The German bailout package, approved by parliament last month, involves 480 billion euros in debt guarantees and funds for injections of capital and purchases of illiquid assets.

On Saturday, Nov. 1, German Chancellor Angela Merkel appealed to banks to take up the government's offer as quickly as possible.

German Chancellor Angela Merkel has urged banks to make use of a government bailout fund worth up to 500 billion euros ($637 billion) that few financial institutions have tapped so far. (01.11.2008)