Nigerians celebrated the homecoming of Benin bronzes pillaged during the colonial era. It comes as African leaders are pushing for the restitution of the artifacts from Europe. 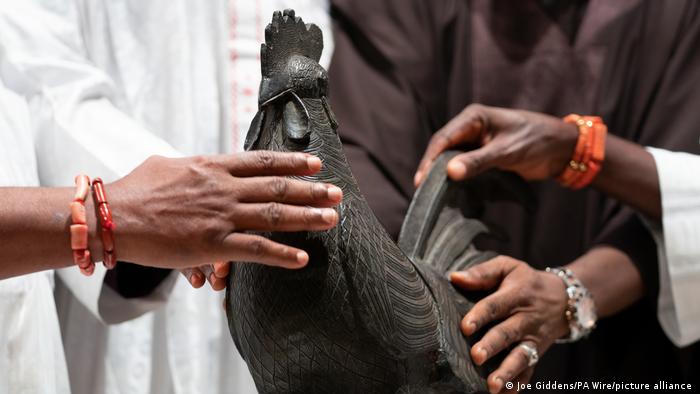 The looted Benin bronze cockerel, known as the Okukur was returned to Nigeria from the UK

Two Benin bronzes were returned to their ancestral home 125 years after British soldiers looted them from West Africa.

A colorful ceremony on Saturday marked the return of sculptures, one of a cockerel and the other the head of a king, to the Oba palace in Benin City in Nigeria.

"They are not just art but they are things that underline the significance of our spirituality," a spokesperson for the Oba palace, Charles Edosonmwan, said. 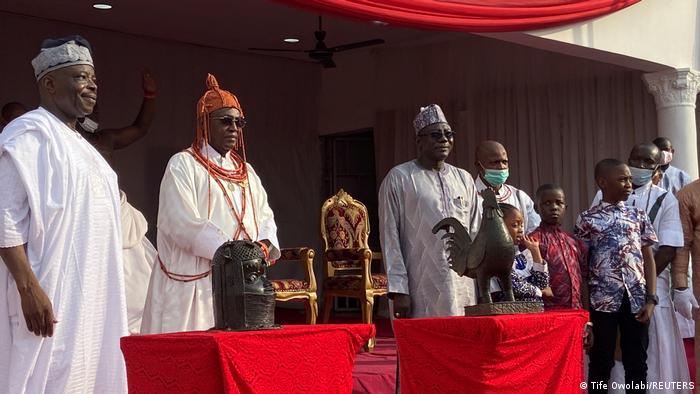 Two Benin bronzes back at their ancestral home in Nigeria

The University of Aberdeen and Jesus College Cambridge became the first institutions in the world to return Benin bronzes when they handed it back to the Nigerian High Commission last year.

At the time, Professor Abba Isa Tijani, Director-General of Nigeria's National Commission for Museums and Monuments, urged "other museums and institutions across the world to take this opportunity and follow suit."

Colonizers stole on a grand scale

During the colonial era, many pieces were acquired illegally and ended up in European collections. As a result, some estimate 80% to 90% of sub-Saharan African cultural heritage to be in Western museums.

Musée du Quai Branly–Jacques Chirac in Paris alone holds around 70,000 African objects and the British Museum in London has tens of thousands more.

Britain, Belgium, the Netherlands and Germany have all received requests from African countries to return lost treasures.

Last year, Germany announced plans to send hundreds of bronzes back to Nigeria.

As Nigerians hailed the return of the two bronzes to Benin City on Saturday, the president of the neighboring nation of Benin, Patrice Talon, opened an exhibition of historic artworks returned by France last year.

The 26 pieces were stolen in 1892 by French colonial forces from the former Dahomey kingdom, in the south of modern-day Benin.

The "Benin art yesterday and today" exhibition was "returning to the Benin people part of their soul, part of their history and their dignity," Culture Minister Jean-Michel Abimbola told the AFP news agency.

Abimbola said discussions were ongoing to return other objects, including the sculpture of the god Gou, which is still in the Louvre in Paris.