About 2,000 former FARC rebels have rallied in Bogota to protest against the murder of ex-combatants. Some 236 former rebels have been killed since the signing of a peace deal in 2016 that ended five decades of conflict. 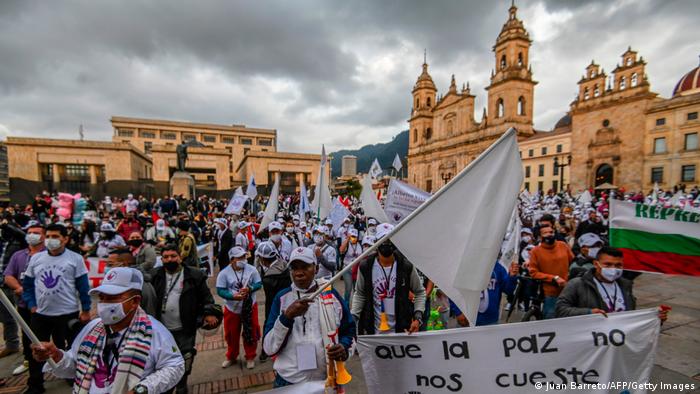 Hundreds of demobilized former FARC guerrillas gathered in the Colombian capital's Bolivar Square on Sunday to demand the implementation of a 2016 peace deal and an end to killings of ex-combatants who laid down their arms.

Around 2,000 former members of the Revolutionary Armed Forces of Colombia (FARC) marched into Bogota from different parts of the country, waving white and Colombian flags.

The march began in the southern town of Mesetas, some 200 kilometers (125 miles) away, on October 21, after the killing of two local ex-FARC combatants.

The delegation is demanding to meet with President Ivan Duque to urge him to stop the violence that has claimed the lives of 236 former rebels since the signing of a historic peace agreement with the Colombian government four years ago. 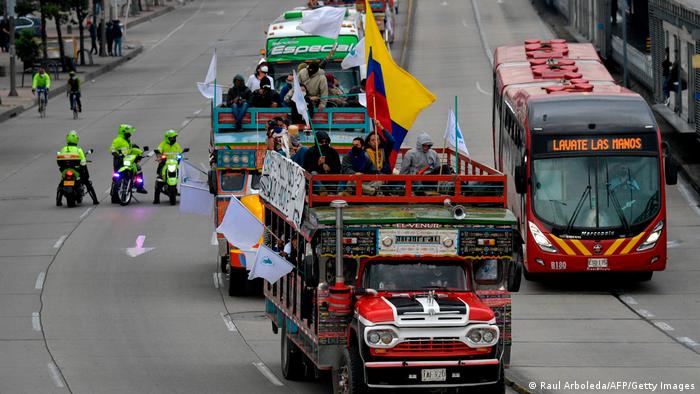 The murders have been seen as a major roadblock for the implementation of the deal that ended the group's role in a conflict that spanned over five decades and killed more than 260,000 people.

"We laid down our arms believing in the promises of the state, yet to date 236 of our comrades have been killed in different parts of the country," said senator Carlos Antonio Lozada from the Revolutionary Alternative Common Force, the political party created after the peace deal which retained the rebel group's FARC acronym.

The UN has also raised concerns about the killings.

After assuming power in 2018, Duque vowed to modify the deal made by his predecessor, Juan Manuel Santos. He considered the agreement too lenient on the ex-rebels accused of atrocities. The Congress has, however, rejected the move.

The Duque government says it is committed to the agreement and has blamed FARC dissidents who rejected the 2016 deal as well as drug-trafficking organizations for the killings of the former guerrillas.