Two police officers and four civilians have been released to the Red Cross. After upending any chance for peace talks with a deadly attack last year, the group has signaled its willingness to temporarily end hostilities. 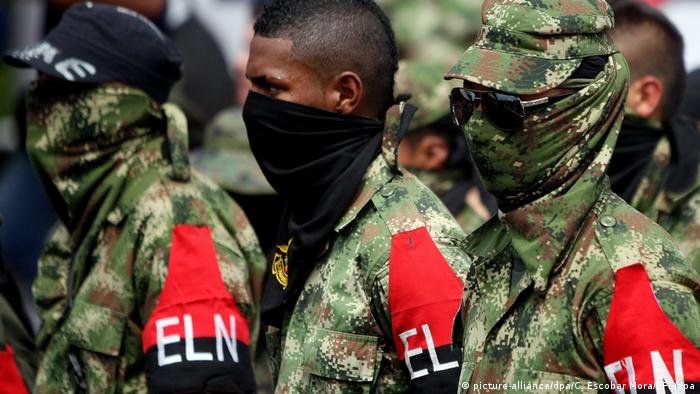 The National Liberation Army (ELN), one of Colombia's biggest active guerrilla groups, released six hostages on Sunday, according to a statement from the International Committee of the Red Cross (ICRC).

"ICRC teams that visited the areas verified the six people were in adequate health conditions for their transfer," said the humanitarian organization.

The hostages included two police officers, who had been held captive for more than three months, and four civilians. Last week, the ELN also released hostages, including two workers of an oil company operating in the Arauca province near the Venezuelan border.

So far this year, Colombian armed groups have released 13 hostages to the ICRC.

"We are grateful to all the parties for the trust they continue to place in the ICRC to carry out our humanitarian work," said the ICRC's Nicolas Lennsens. "As long as the humanitarian consequences of the conflict and armed violence persist, we will continue to work to protect lives and the dignity of those affected by this reality."

Since a 2016 peace deal with the Revolutionary Armed Forces of Colombia (FARC) effectively ended the group's operations, the ELN has now become the largest guerrilla group operating in the country with 2,000 active members.

The ELN launched a deadly attack on a police academy last year, killing 22 cadets and injuring 66 others. President Ivan Duque said the attack effectively upended the possibility of peace talks with the group. Last month, the Colombian military killed a key ELN commander in a targeted strike.

Since then, the ELN has signaled its willingness to cease hostilities under a UN-backed moratorium on fighting so that humanitarian organizations and public health authorities can better tackle the novel coronavirus pandemic.

The Colombian government has said it would not engage in peace talks until the ELN ends kidnappings, frees hostages, and ceases attacks on infrastructure.

Colombia's presidential election is an important milestone towards consolidating the peace accord with FARC guerrillas. It was reached after decades of bloody conflict between the state and the FARC guerrilla groups. (26.05.2018)