A key leader of Colombia’s National Liberation Army (ELN) rebels has been killed in a military bombing. 'Mocho Tierra' handled operations that brought in revenue of about $1 million a month for the guerrilla group. 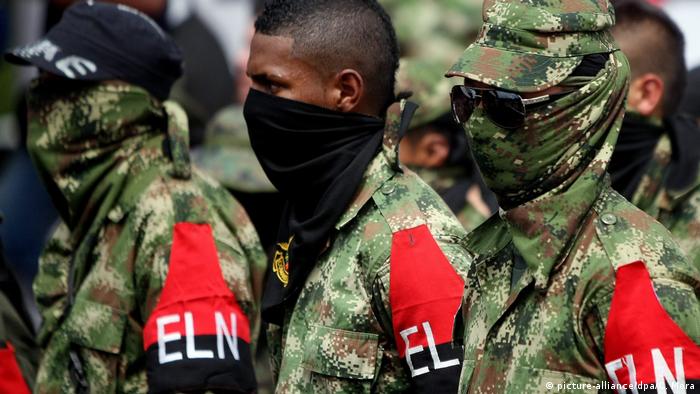 Colombia’s air force killed one of the most-wanted leaders of the National Liberation Army (ELN), a guerrilla group, and three others in a bombardment of rebel positions in the north, Defense Minister Carlos Holmes Trujillo said Thursday.

The commander, known as 'Mocho Tierra', and “three other terrorists” were killed in a joint operation between the air force, army troops and the police, the minister said.

The bombing in a rural area of Bolivar province targeted Mocho Tierra, "a high-value target and was involved in the planning and execution of terrorist acts against the civilian population and the armed forces," he said.

Mocho Tierra was known for his management of illicit finance that generated monthly revenues of about $1 million for the ELN, Trujillo said.

The rebel leader had been an ELN member for nearly 30 years and was involved in the 1999 kidnapping of airline passengers. He handled drug trafficking and illegal mining in northern Colombia.

The ELN is Colombia’s last active guerrilla movement, comprising of about 2,000 combatants. It operates in 10% of the country, and is much smaller than the Revolutionary Armed Forces of Colombia, or FARC, which signed a landmark peace deal with the government in 2016.

The ELN has sought peace talks with President Ivan Duque, who broke off earlier negotiations after a car bomb attack on a police academy in the capital Bogota that killed 22 cadets.

Duque’s government has refused to begin negotiations until group halts all violent activity.

ELN had declared a unilateral ceasefire for April due to the coronavirus pandemic but did not extend it.

Across Colombia, protesters carried photos of murdered activists and signs reading: "No more bloodshed." Over 400 people have been killed in an alarming wave of violence since the 2016 peace deal was signed. (27.07.2019)