The Colombian government has dismissed as a joke the list of assets FARC rebels have put forward as compensation for its victims. Orange juicers and old boots are reportedly among the items on the inventory. 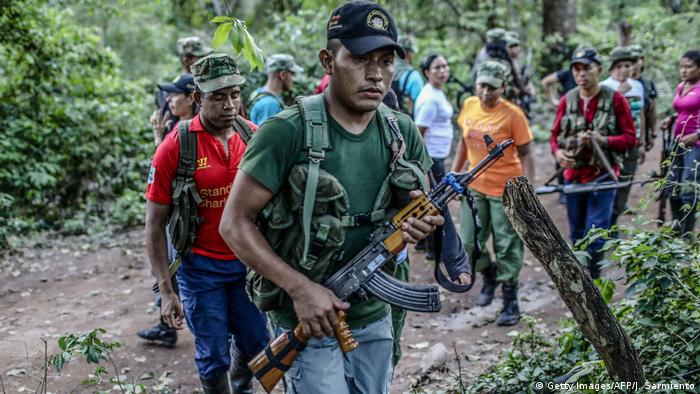 The Revolutionary Armed Forces of Colombia (FARC) defended its 135-page list Thursday in the face of fierce objections from a number of government officials.

The former rebels handed the inventory of their property and funds over to the United Nations earlier this month as part of a 2016 peace agreement. The list's contents are to be used to pay reparation to victims of forced disappearance, rape, displacement, kidnapping and land mines.

The FARC is believed to have amassed vast wealth from various criminal activities such as extortion, taking hostages for ransom, and selling coca plants to cocaine traffickers during Colombia's five-decade conflict.

FARC legal advisor Enrique Santiago told local radio the group had "done something that nobody has done" in presenting a record "so exhaustive that it's even being criticized."

But government officials have described the list as a joke, saying it contains many items with little or no monetary value.

"There are utensils like pots, orange and lemon squeezers, and boots, that will be depreciated and have no commercial value, so they won't be a source of reparation for victims," Attorney General Nestor Humberto Martinez told journalists.

Post-conflict minister Rafael Pardo said FARC's offerings and the inclusion of "some absolutely ridiculous assets makes a mockery of the victims."

FARC lawyer Santiago defended the document, saying there was "no legal concept in international law that outlines how to deal with this type of property."

When asked about the fate of money FARC earned from illegal activities, he said much of it was channeled into the construction of roads and to support the group's more than 7,000 guerrillas.

Senior FARC member Felix Muñoz, known by the alias "Pastor Alape," told local media the attorney general was misrepresenting the situation: "Why doesn't the prosecutor say that 20,724 heads of cattle were put at the disposal of the (victims' compensation) fund?” he said, adding that the FARC had included 2,500 million pesos ($842,000 or about 714,000 euros) as well as 327.5 kilograms of gold among its assets.

FARC members finished handing over more than 8,000 weapons to the UN earlier this month as part of the demobilization plan detailed in the peace agreement. On Sunday, the group is set to launch a conference to cement its transition into a political party.

In Colombia, the military killed thousands of random people to boost its body count. The crimes are the basis of controversial discussion as the Constitutional Court decides how the transitional justice system will work. (12.08.2017)