Ex-president Alvaro Uribe is being investigated for witness tampering and has been accused of having links to paramilitary groups. He had been under house arrest since August. 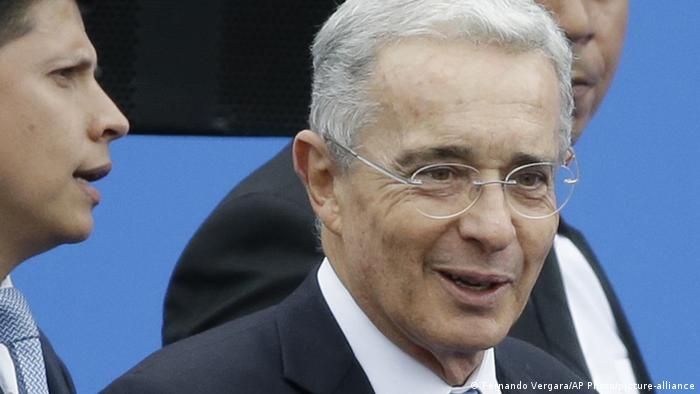 Former president of Colombia Alvaro Uribe was released from house arrest on Saturday. He had been under preventative detention while he is investigated for possible witness tampering.

Uribe is the first Colombian ex-president to be placed under house arrest and his case has divided Colombians, reopening the wounds of the country's long-running armed struggle and current attempts to make a peace deal work.

Since 1958, armed conflict in Colombia has left more than 260,000 people dead and more than 7 million displaced, according to the government's National Center for Historical Memory.

Uribe is widely credited for leading a military offensive against the FARC rebels, which his supporters say drove them to the negotiating table, leading to the signing of the 2016 peace accord.

But the former president is also haunted by accusations of human rights abuses. During his presidency, military officers are said to have killed thousands of poor peasants and passed them off as guerrillas to inflate body counts and get bonuses.

For years, Uribe has been accused of having ties to paramilitaries and this year's case against the ex-president was triggered by the testimony of former paramilitary members. The former fighters, who were interviewed by leftist Congressman Ivan Cepeda in prison, accused Uribe of helping to establish a paramilitary group in the mid-1990s.

A ruling on procedure

As a result, the Colombian Supreme Court ordered the detention of Uribe in August, a decision that shocked Colombians and unleashed protests in favor and against it.

In a 1,554-page decision, the high court ruled there was ample evidence showing that Uribe had pressured former paramilitaries into retracting damaging statements against him, which amounted to witness tampering.

But as Uribe resigned his post as Senator in the legislature, the Supreme Court relinquished control of the case, ruling that Uribe should be tried as an ordinary citizen, and handed it to the chief prosecutor's office.

Municipal Judge Clara Salcedo ruled that the new legal framework of Uribe's case did not require his detention during the investigation phase, as he has not yet been charged with a crime.

While the decision can be appealed, Uribe was eligible for immediate release. The usually outspoken politician did not comment on the ruling, except for a post on Twitter where he wrote ''Thank God. ''

Uribe has so far denied those accusations, saying they are part of a plot against him.

The shooting of Colombian ex-presidential candidate Alvaro Gomez Hurtado in 1995 was widely thought to be the work of his political rivals. But in a letter to a special court for peace, FARC says it was behind the hit.