Colombia's government has agreed to a cease-fire with one of the country's last major left-wing guerrilla groups. The announcement has come just days ahead of Pope Francis' visit to Bogota. 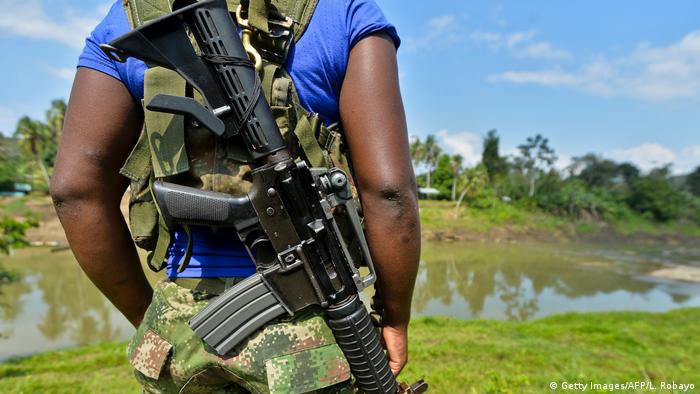 President Juan Manuel Santos announced on Monday that his government will sign a cease-fire deal with the National Liberation Army (ELN) after months of peace talks with the rebel group.

The stop in fighting is set to go into effect on October 1 and would last until January 12, Santos said. He added that the deal would continue to be renewed as long as progress continues to be made in peace negotiations.

"Yes, it was possible," the ELN said in a tweet announcing the deal in Ecuador's capital Quito, which has hosted the latest round of talks since February.

The deal was announced just days before Pope Francis is due to arrive in Colombia on Wednesday. Francis' four-day visit to Colombia is aimed at supporting the fragile peace processes taking place between the government and rebel factions.

"The pope will thus arrive at a unique moment in our history, when we turn the page on this absurd conflict and look with hope toward the future," Santos said.

Colombia's largest guerrilla force, the Revolutionary Armed Forces of Colombia (FARC), disarmed last month as part of a peace deal to end over half a century of civil conflict.

Santos has said he's now striving for a deal with the left-wing ELN to secure a "complete peace." But talks with the more ideological ELN have moved at a slow pace since initial talks began over three years ago.

The ELN and FARC formed in 1964 to fight for land rights on behalf of poor, rural communities. The ELN, whose founding members included radical Roman Catholic priests, is believed to have around 1,500 active fighters.

Unlike the FARC which financed itself partially through Colombia's drug trade, the ELN funds its fighters mainly through extortion and kidnappings.

"The priority is to protect citizens, so abductions, attacks on oil pipelines and other hostilities against civilians will cease during this period," Santos said.

Decades of conflict involving the two rebel movements, the Colombian army and right-wing paramilitary groups have left more than 260,000 dead, displaced 6 million people and led to the disappearance of tens of thousands.