Protest leaders in Colombia have called for a general strike after talks with President Ivan Duque failed to bring a breakthrough. Four people have been killed in the conflict with police, among them a young student. 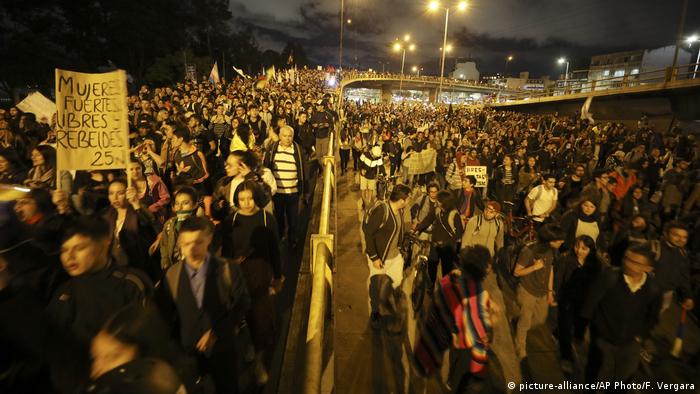 Widespread anti-government protests in Colombia continued for the sixth day on Tuesday, as the death toll continued to rise.

The first victim, an 18-year-old high school student, who became a symbol of the movement, died from injuries he sustained from being hit by a teargas canister.

Dilan Cruz was hit in the head during a protest on Saturday, and his death could fuel criticism of the police response to the movement. Protesters had earlier marched by the hospital in which he was being cared for, chanting "Be strong Dilan" and building makeshift monuments for him.

Soon after his death, protesters began gathering on the Bogota street where he was wounded, banging pots and pans and chanting "The state killed him!''

Thus far, four people have been killed in the protests and a further 500 injured.

Talks fizzle as the streets simmer

President Ivan Duque met with unions and business leaders on Monday, and said he deeply regretted Cruz's death, sending his condolences to the family. He then met with protest leaders from the National Strike Committee on Tuesday, yet the meeting failed to produce a breakthrough.

At Tuesday's meeting, the strike committee introduced two new demands on the government: That it withdraw its controversial tax reform plan currently being debated in Congress, and that it disband the country's dreaded ESMAD riot police unit.

After the talks, Diogenes Orjuelo, head of the Central Union of Workers (CUT), announced, "There is a strike tomorrow and we will continue looking at what actions we can take."

Student leader Jose Cardenas told reporters,"The government has not given a response to the points presented. The reasons for the strike continue."

Protests began last week when 250,000 people hit the streets to rally against economic reforms, police violence and corruption. The economic reforms that have inspired such fury reportedly include cutting the minimum wage for young people.

Protesters are also upset with a lack of government action to stop the murder of hundreds of human rights activists. The movement has included a strike organized by unions, student groups and indigenous organizations.

The protests arose after mass anti-government demonstrations in Ecuador, Bolivia and Chile.

Duque has promised a "national dialogue'' to address issues such as rural violence, environmental policy and "growth with equity," but so far his promises have been met with skepticism. Protesters want a separate dialogue of their own with the leader.

Protesters are angry over rumored austerity measures in the offing — which President Duque denies. The unrest began relatively peacefully but evolved into violent clashes. At least three people were killed. (22.11.2019)