Protesters are angry over rumored austerity measures in the offing — which President Duque denies. The unrest began relatively peacefully but evolved into violent clashes. At least three people were killed. 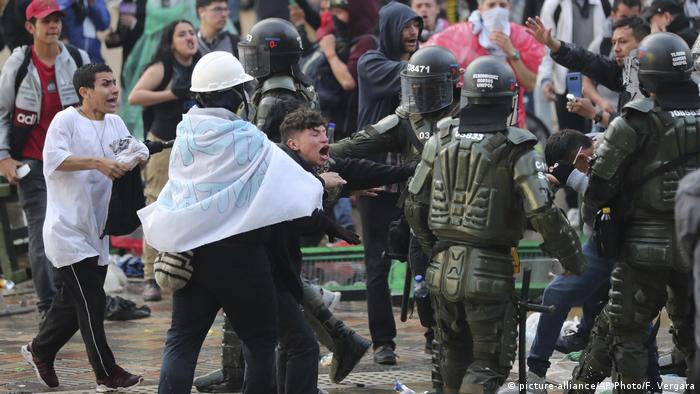 Hundreds of thousands of Colombians took to the streets on Thursday amid a general strike over rumored economic reforms and increasing discontent with the government of President Ivan Duque.

Protest organizers said more than 1 million people demonstrated across the country, while authorities put estimates at 207,000.

What began as peaceful marches turned violent by early evening as demonstrators threw rocks at riot police officers, who fired tear gas to disperse the crowd.

Defense Minister Carlos Holmes Trujillo said at least three people died in the clashes, while more than 120 civilians and 150 members of the security forces were injured. 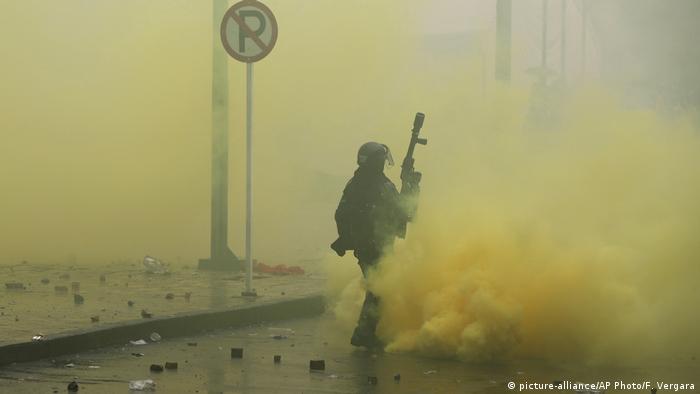 At one point, locals attempted to enter the nation's Congress and tore down some black cloth protecting a historic building in Plaza Bolivar, in downtown Bogota.

In the city of Cali, 460 kilometers (286 miles) southwest of the capital, the mayor implemented a curfew from 7 p.m. local time (midnight GMT). Protesters had blocked roads and damaged dozens of transit stations, according to authorities.

Trade unions, students, opposition parties and some of Colombia's indigenous groups are concerned regarding an array of Duque's economic, social and security policies.

"It is an accumulation of situations that we hope to see reviewed after today, including a great national dialogue of conciliation," Robert Gomez, president of the main workers' union, told news agency AFP.

Duque has repeatedly denied such economic alterations are in the pipeline.

Earlier this week, he said: "No reform has been proposed."

"It has been said that we want to pay young people less than the minimum wage. That's also a lie."

Analysts expressed doubts the protests would generate any sustained unrest like that seen recently in other Latin American countries, notably Bolivia, Chile and Ecuador.

"We're not in a pre-insurrectional climate," said Yann Basset, a professor at Bogota's Rosario University. "I'm not sure there's a general rejection of the political system."

Beer and clothing for peace

Tens of thousands of protesters march in Colombia