Nobel-winner Gabriel Garcia Marquez is the new face of Colombia's 50,000-peso banknote. The bill will gradually replace one bearing the image of the 19th-century poet and novelist Jorge Isaacs. 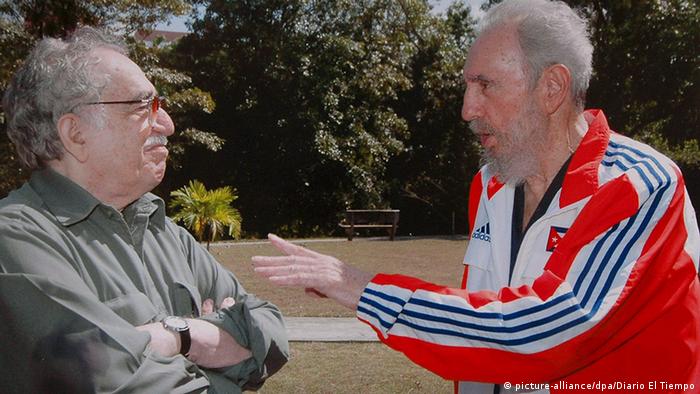 Worth 15.40 euros ($17.30), Colombia's newest note bears the image of the Nobel laureate Gabriel Garcia Marquez, who died at age 87 in Mexico in 2014. Born in 1927, Garcia Marquez began as a journalist before finding success with magic realist fiction and winning the Nobel Prize for Literature in 1982.

The light-purple bill "pays honor to a person who carried Colombia's name far and wide from the middle of the last century," Jose Dario Uribe, the head of Colombia's central bank, said on Friday. Uribe added that the bill would "maintain the public's confidence in paper money" and that "its counterfeiting would be very difficult."

Garcia Marquez had verbally supported the regime of Fidel Castro (right in photo).

The bill was released at an event featuring Garcia Marquez's relatives, politicians and indigenous people. It was conceived as part of the nation's law #1741, which was written months after the author's death to "honor the utmost epitome of Colombian art and culture": Garcia Marquez. Jadis Saker, the first retail bank customer to receive the new bill in the port city of Santa Marta, said "this moment will remain carved into my memory," according to the newspaper "El Heraldo."

A forthcoming 10,000-peso note will feature the 20th-century anthropologist Virginia Gutierrez on the front and the "exotic biodiversity" of Colombia's jungle on the reverse. The new 2,000-peso note will feature the 20th-century "pioneer of modern art in Colombia" Debora Arango, who will replace the independence leader Francisco de Paula Santander. The 19th-century poet Jose Asuncion Silva will keep his face on the 5,000-peso bill.