Cold Shoulder for Swedish Seductresses | Germany | News and in-depth reporting from Berlin and beyond | DW | 10.02.2005

Trying to get three gay penguin couples back on the straight and narrow, zoo officials in the northern German town of Bremerhaven hoped Swedish penguin ladies would do the trick. So far, there's been no success. 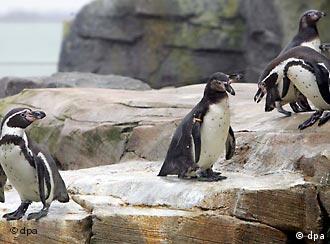 No mixed-sex frolicking on the rocks at Bremerhaven zoo

The zoo came up with the ingenious idea of trying to convert the feathered queens by flying in some exotic birds from Scandinavia. But thus far, the boys haven't exactly been fighting for a taste of the action. On the contrary, they have shown their suitors the cold shoulder.

"The relationships were obviously too serious," zoo director Heike Kück said of the same sex penguin couples who seem to prefer sitting on stones, which serve as a replacement for the eggs they will never be able to lay, to flapping about over the evidently superfluous seductresses.

But the zoo, which advertises itself with the slogan "encounters of a special kind," isn't planning to give up too easily. Humboldt penguins are considered an endangered species, which makes it all the more important that those in captivity do the decent thing and reproduce. The zoo is planning to wait until spring 2006 to see if their international match-making efforts spawn results.

However, with Humboldt penguins renowned for their gay persuasion, the odds are not stacked in favour of success. But just in case the girls really can't pull of the conversion act, the zoo in Sweden has sent a couple of its own males to save the ladies from out and out sexual frustration.

How many steps does it take to transform a dog from an arm accessory to a television superstar? Daisy, the canine companion of murdered Rudolph Moshammer, is about to find out. If she can still walk, that is. (Jan. 27, 2005)

"Schnappi" Snaps Up the Number One Spot

Germans have gone crocodile-crazy after a children's song about the reptile took the charts by storm. The song, like the reptile, struck before the likes of Kylie Minogue or Robbie Williams even knew what was happening. (Jan. 18, 2005)

From animal antics and wacky inventions to celebrity gaffes and cultural idiosyncrasies -- DW-WORLD's "And Finally…" brings you news on weird and wonderful happenings from all over Germany.