Clinton′s Pakistan trip shows improved atmosphere, but distrust remains | Asia | An in-depth look at news from across the continent | DW | 19.07.2010

In a bid to boost ties with a key ally, the US Secretary of State has paid an official visit to Islamabad. But many issues continue to divide the two countries. 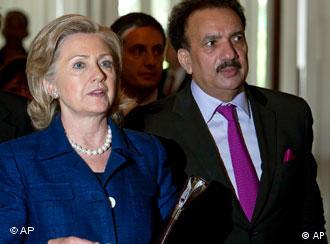 US Secretary of State Hillary Clinton announced several American aid projects during her visit to Pakistan. The schemes in the field of dam construction, power generation, agricultural development and building hospitals are the first part of a five year, 7.5 billion dollars civilian aid package passed by Congress last year. The US says its aid is an indication of its commitment to improve ties with Pakistan and overcome the distrust that many there hold against the United States.

The atmosphere between Washington and Islamabad has indeed improved since Clinton's last visit in October 2009. The Pakistani army has intensified its military struggle against the Pakistani Taliban in the lawless border regions. Washington appreciates that the army has redeployed a substantial number of troops from the border with its arch-rival India to North West Pakistan for this purpose. 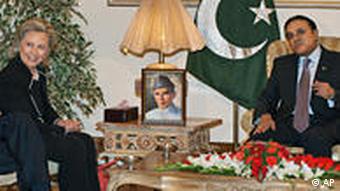 Washington has - possibly for lack of alternative options - of late also made it clear that Pakistan has a significant role to play in Afghanistan. Indicating a more constructive relationship, Pakistan and Afghanistan signed a landmark trade deal, which the US had been encouraging for long, in Clinton's presence in Islamabad.

But many observers remain skeptical that all the major players in Pakistan are really willing to commit themselves constructively on the Afghanistan issue. Pakistan's security establishment has for long been preoccupied with limiting India's influence in Afghanistan and supporting the Afghan Taliban and their allies as Pakistani "assets" against the Karzai government, which they see as an anti-Pakistan regime. This has effectively subverted US policies in Afghanistan. But the Obama administration's wish to pull out US troops from the region as soon as possible has only strengthened those in Pakistan who favor such "strategic" options. 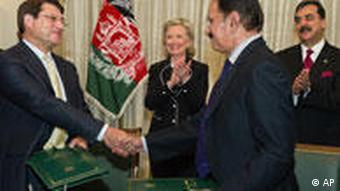 Clinton's talks in Islamabad have once again highlighted differences about the role of the Haqqani militant network, a long-standing Pakistani "asset" in Afghanistan, which Clinton said the US planned to officially declare a terrorist organization. Pakistan, on the other hand, has been trying to present the Haqqanis as a partner and possibly mediator in peace talks between Kabul and Islamist militants.

In a TV interview, Clinton also repeated her controversial view that al Qaeda leader Osama bin Laden is hiding in Pakistan. She called on Pakistanis to do more to fight terrorism on their own soil.

The issue of Pakistan's planned civilian nuclear cooperation with China is another indication of mutual suspicion. The US is against China providing Pakistan with nuclear reactors, or wants this deal at least to be cleared by the Nuclear Suppliers Group, which allowed similar cooperation between the US and India. Pakistan, for its part, is disappointed that Washington has not been ready to help it acquire nuclear technology for peaceful purposes, due to concerns about proliferation.

The secretary-general of NATO, Anders Fogh Rasmussen, says the war in Afghanistan has cost the international community more than it could have imagined, and that casualties among troops and Afghans would continue. (19.07.2010)

The US authorities have arrested a Pakistani-American in connection with the failed bombing in New York's Times Square on Saturday. Pakistan has vowed full co-operation with the investigation. (04.05.2010)