A patch of rainforest in Rwanda that served as a refuge during the country's genocide has been all but destroyed. Saving what remains could depend on the outcome of climate talks in Durban. 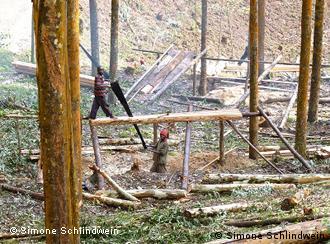 More than 90 percent of the Gishwati has already been lost

The Gishwati forest in western Rwanda, not far from Lake Kivu, is one of the country's last remaining patches of rainforest.

Logger Silvestre Bariyanga is only permitted to fell selected trees. In the past, local authorities charged loggers 200 Francs per tree. Now it doesn't cost anything. But they are expected to pay taxes if they sell the wood, Bariyanga explains.

He sells wooden slats to carpenters and furniture producers. "It's a good job," he says. "Almost all the men who live around here are loggers. This is the only real source of income we have around here." 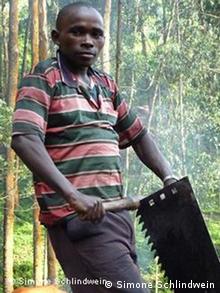 Locals can earn a good wage harvesting timber in the Gishwati

The loggers are only permitted to cut down eucalyptus trees, which aren't native to this area. Farmers planted a lot of eucalyptus here because it grows quickly and is profitable when converted into timber. But eucalyptus also drains water from the other trees of the forest.

The government is allowing it to be removed, with an eye to reestablishing the area as a protected natural reserve later.

Faustin Gashakamba has made it his life's mission to protect the Rwandan rainforest.

On a hike through the last remaining hectares of this centuries old jungle, he takes slow, thoughtful steps. He knows every tree in this stand, every fern, every bird batting its wings in the cover overhead.

The young environmentalist works for a conservation group called the Great Ape Trust, which coordinates projects with the Rwandan government to preserve the forest. 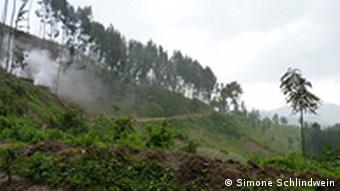 The Gishwati can still absorb 200,000 tonnes of carbon dioxide

The Gishwati once streched over 28,000 hectares, but starting in the 1970s, much of this region was clear-cut to make way for cattle ranches and tea or timber plantations.

The deforestation is also a legacy of the Rwandan genocide. Hundreds of thousands of people, displaced in the violence, were permitted to return to Rwanda and settle in natural reserves, like the Gishwati. They cut down the trees for fuel and timber to make homes.

Only 600 hectares of the forest remain - less than 2 percent of the original stand.

Gashsakamba says it is an enormous challenge to preserve even this last remaining corridor of trees and wildlife. He heads up a team of six eco-guards tasked with protecting the forest against illegal timber harvesting or the theft of fruits.

"When they find someone who is doing this, they try to teach them it's not allowed. We explain the importance of protecting the forest. But if they are caught a second or third time, they have to be punished," Gashakamba explains as he strolls through the underbrush.

At first, the guards had to issue repeat warnings to the same offenders. But, since the guards have been working with the local communities to explain the importance of the forest, people are less like to use the forest illegally.

"Most of the illegal activities were animal grazing. The forest is surrounded by livestock farms, so sometimes the cows wander into the forest," he says.

Gashakama's organization, the Great Ape Trust, and the Rwandan government are now working on the Gishwati Area Conservation Program.

So far, they have restored some 800 hectares of forest. Gishwati conservationists say the new flora is thriving and animal populations are starting to rebound. Rehabilitation of the rainforest is likely to increase Rwanda's chances of participating in global carbon trading through the establishment of new carbon sinks in Gishwati.

The forest can absorb 200,000 tones of carbon dioxide. Valued at about $5 per ton under UN guidelines, this means the Gishwati can already generate around a million dollars a year.

This could be the forest's saving grace - such a high amount of carbon absorption is something Rwanda can trade for funds on the carbon market. 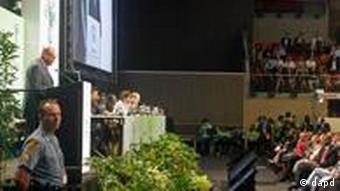 Climate negotiators will address forest preservation at the talks in Durban

However, she is worried that if climate negotiators - who are now gathered for talks in Durban, South Africa - fail to extend the Kyoto protocol, Rwanda will no longer be able to tap global funding to protect its forest or make other improvements in its energy policies.

"This is about life. I am scared that Kyoto is going to die in Durban," she said in an interview with Deutsche Welle.

Mukankomeje has found the climate negotiations a frustrating process and says she is disappointed with the limited voice given to developing nations.

Without concrete figures about how climate change is taking its toll, Mukankomeje says Rwanda has been unable to argue for the funding they need to fight its effects. So the country has been gathering data and reassessing its energy policy ahead of this year's climate talks.

"We have created some guidelines to mainstream climate change. Sector of water, sector of health, agriculture, energy, transportation. We are going to be affected," she said. "We are planning a lot of trees. That is going to help us."

Mukankomeje will be taking part in the climate talks in Durban, where she will present some of the results of the Gishwati Area Conservation Program.

She has already resigned herself to the idea that leading industrial nations are unlikely to help Rwanda cope with the effects of climate change. But she is hoping negotiators will find some mechanism to ensure that carbon trading can move forward, even if Kyoto doesn't.

Negotiations in Durban are likely to solidify a pay-to-preserve plan for forests. But proponents of the Yasuni initiative claim this is not enough. Can an expanded framework compensate countries better? (28.11.2011)

Brazil has been monitoring illegal logging in the Amazon with satellite technology for 23 years. Now, interest in this pioneering know-how is growing in other countries that are struggling to deal with deforestation. (10.11.2011)

Critics hunt for devil in the detail of forest negotiations

Incentives are needed to reverse current rates of deforestation that release up to a fifth of human carbon emissions, but a UN program to reward forest preservation is provoking concerns among some observers. (21.11.2011)

Click here to listen to the report on the Gishwati