Climate glossary: Cutting through the COP26 jargon | Environment | All topics from climate change to conservation | DW | 29.10.2021 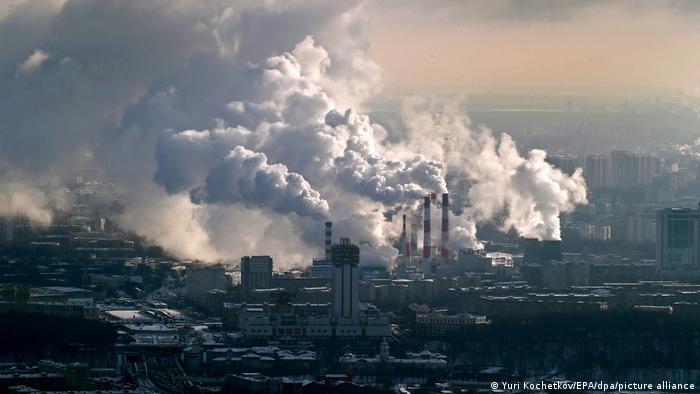 As the COP26 summit tries to act on the climate emergency, observers will benefit from a basic knowledge of the technical climate terms and idioms underpinning debate. Indeed, what does COP even stand for? From the Anthropocene to the UNFCCC, here's a glossary of key terms that will pepper dialogue in Glasgow as the world comes together to save the planet.

A climate mitigation pathway consistent with limiting warming to 1.5 degrees Celsius (2.7 Fahrenheit) above pre-industrial levels by 2100. Climate scientists regard this temperature rise as the best-case warming scenario. Not just energy and transport, but economic growth, technological developments and lifestyle are factored into pathways consistent with 1.5 C of warming.

Finding ways to adjust to the impacts of human-induced climate change, including extreme weather. The idea is to moderate the harm, for instance, by constructing housing away from locations vulnerable to wildfires or sea level rise. Climate finance will be vital for funding adaptation measures.

Human activity has had such an impact on the climate and the environment that it has led to the naming of a new geological epoch: the Anthropocene. The mid-20th century is regarded as the moment that human activities transformed the Earth system, especially through rapidly increasing carbon dioxide (CO2) emissions.

The amount of greenhouse gas (GHG) emissions humanity can emit this century and still keep temperature rise to 1.5 degrees. Carbon budgets also relate to the emission limit — and associated carbon credits or permits — set as part of a cap-and-trade scheme. Entities need to surrender permits equal to their emissions. When they break their budget, they need to splash out for more credits.

Reducing carbon emissions to tackle global warming by capturing the CO2 produced by power generation or industrial activity, and then transporting it to store deep underground.

A measure often used by developing countries when addressing emissions reductions, it measures the CO2 released per unit of economic output, which is most often measured as gross domestic product (GDP).

Existing fossil fuel-based energy systems have been so dominant that they inhibit efforts to introduce alternative energy. Carbon lock-ins happen when coal-, gas- and oil-fired energy create an inertia that inhibits the transition to zero-emission alternatives. This understanding can prompt policymakers to consider early retirement of existing high-emissions infrastructure.

Balancing emitted CO2 by removing the equivalent amount from the atmosphere through sequestration in carbon sinks — including soil, forests and oceans. As these sinks are damaged, or cut down in the case of forests, emissions need to be equally cut to maintain carbon neutrality.

Under a carbon tax, governments set a price that emitters must pay for each ton of greenhouse gas they emit. A carbon tax differs from carbon trading, in that it provides a higher level of certainty about cost but not about the level of emissions reduction to be achieved.

Also known as cap and trade, this market-based incentive to meet carbon reduction targets caps greenhouse gas emissions and divides them into tradeable emission permits, or carbon credits. If a company overextends its credits, it will have to buy more from an entity that lowered emissions and has carbon credit in the bank. The lower the emissions, the lower the costs; and the higher the profit.

The world's poorest and most vulnerable people, and future generations, will suffer the worse climate change impacts. Climate justice aims to equitably and fairly share the burdens of climate change through broad investment in mitigation, adaptation and sustainable development.

Greta Thunberg: 'Germany is the fourth biggest emitter of CO2 in history'

The Conference of the Parties is the supreme body of UN conventions, including the United Nations Framework Convention on Climate Change. All states that are parties to that convention are represented at the COP, during which they review implementation of targets set in the Paris Agreement, for example, and decide how to better achieve climate mitigation measures.

The process by which countries, individuals or other entities aim to achieve zero fossil fuel carbon emissions largely associated with electricity, industry and transport.

Balancing the amount of GHGs emitted with the amount removed from the atmosphere. This balancing should include actual emission cuts, not just offsets by planting trees to create carbon sinks, for example — which is sufficient for carbon neutrality.

The first-ever universal, legally binding global climate change agreement adopted at the Paris climate conference (COP21) in December 2015. It established a global framework to avoid dangerous climate change by limiting global warming to well below 2 C, and preferably to 1.5 C.

In 1992 at the Earth Summit held in Rio de Janeiro, 154 states signed a convention to combat "dangerous human interference with the climate system" by reducing greenhouse gas concentrations in the atmosphere. The 1997 Kyoto Protocol first enshrined the measures under the UNFCCC, before it was superseded by the Paris Agreement of 2015.