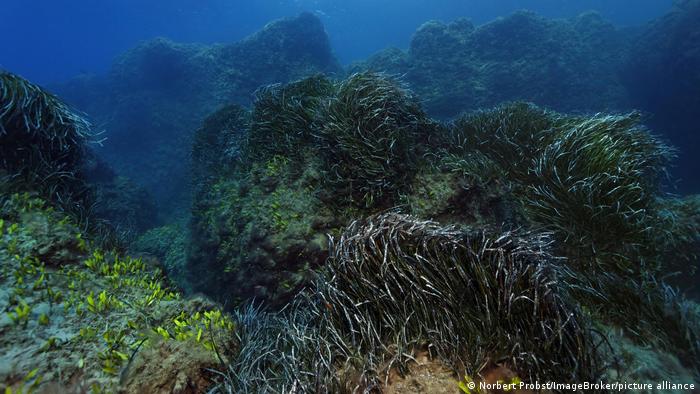 Posidonia: Not just a lush undersea meadow but one of the oldest organisms on the planet

A great undersea meadow extends 15 kilometers (about 9 miles) off the coasts of the Balearic Islands of Ibiza and Formentera. This aquatic prairie isn't just a rich habitat for dozens of species of fish and invertebrates. Named Posidonia oceanica — or Neptune grass — after the classical god of the seas, it is thought to be the oldest organism on earth, comprising a vast colony of seagrass clones.

Each strand is a genetic duplicate of the others. Scientists estimate this vast life-form has been around for more than 100,000 years. And all that time, it has been laying down stores of carbon beneath the Mediterranean.

"Below the vegetation of Posidonia, we can have deposits of organic carbon that have been accumulating during the lifespan of the meadow," said Nuria Marba, an ocean scientist from the Mediterranean Institute for Advanced Studies. Marba said this layer thickens by a meter every thousand years. Cumulatively, this represents a vast carbon store spreading beneath the 55,000 hectares (135,900 acres) of Mediterranean seafloor covered by the grass. 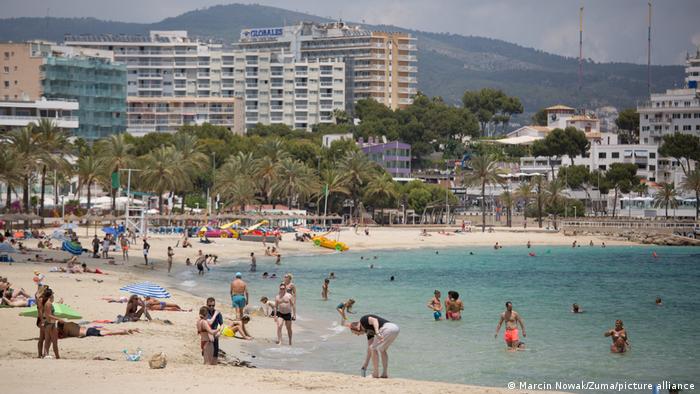 Tourists enjoy the beach at Magaluf, Mallorca in the Balearic Islands

But the grasses face huge pressures. Storm Gloria, which struck the Balearics last year, was just the latest catastrophe for a habitat that has been battered by rising sea temperatures, extreme weather, nutrient-runoff from agriculture and the seabed-scraping anchors of yachts.

A 2012 study found that 11,000 square meters (118,400 square feet) of Posidonia had been scraped away by yacht anchors alone in the previous four years. 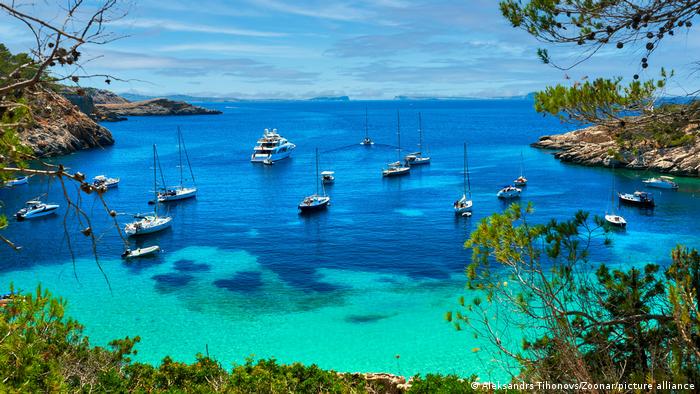 Beneath this peaceful scene off the coast of Ibiza, anchors can cause terrible damage to the marine ecosystem

Yet, as tourist numbers reportedly dropped by 87% during the COVID-19 pandemic, so did many of these pressures. Marba described this window of calm as a tregua: something like a "cease-fire" in a war that has been raging between humans and the undersea environment, at least since the arrival of mass tourism in the 1970s. And it has come at a perfect moment for scientists looking at how the seas help mitigate climate change.

In June, Verra, a nonprofit that develops carbon-pricing systems, began work to assess how to incorporate "the whole seascape" into the world's largest voluntary carbon credit scheme, the Verified Carbon Standard (VCS).

Carbon pricing allows polluting companies to offset their emissions by buying credits that fund projects to save carbon elsewhere. In simple terms, Verra works out ways to quantify how much carbon is saved by, for example, a seagrass restoration initiative, in order to put a price on the credits a manufacturing company can purchase to offset an equivalent volume of carbon from its operations. 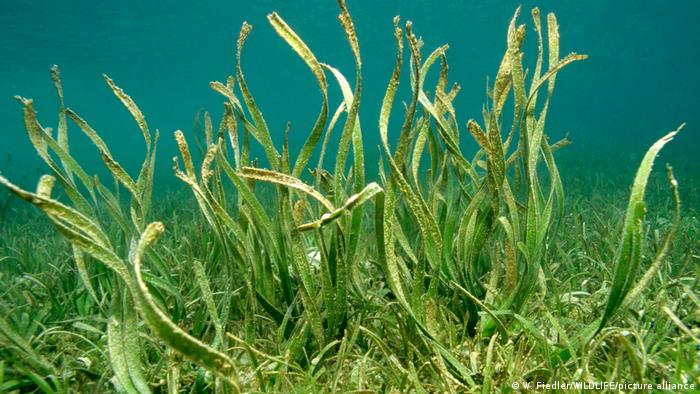 Named for the classical god of the seas, Posidonia is a rich store of carbon

By valuing Mediterranean seagrasses not just for the biodiversity they support but their potential to mitigate climate change, "blue carbon" pricing could allow conservation initiatives like Formentera's Save Posidonia Project to sell certified credits to help fund their work.

"Carbon initiatives would be great as a way to support both restoration — in terms of planting, but also allowing the natural recovery of already damaged meadows — and preventing the deterioration of the meadows that we already have," Marba said.

She would like to see carbon credits fund better processing of wastewater from the tourist resorts of Ibiza, and enforcement of laws introduced in the 2018 Posidonia Decree, the Mediterranean's first law protecting seagrass meadows, such as stopping boats from dropping anchor on the prairie.

In May, Verra registered its first blue carbon conservation project on the Caribbean coast of Colombia, which aims to sequester almost a metric million tons of carbon dioxide over 30 years — equivalent to taking some 7,000 cars off the road — by sustainably managing a mangrove ecosystem.

Seagrass meadows like Posidonia are not far behind. Verra has already developed methodologies to quantify net carbon savings from protecting seagrass meadows.

This means setting a baseline for how much degradation would happen without any action, and showing how much carbon can be saved through carbon-credit funded conservation efforts — both preventing historically sequestered carbon from being released by disturbing the seafloor, and allowing the plant to continue to capture more CO2 as it grows.

"The way that's done is usually by looking at historical data of what has happened in the past 10 years in terms of [for example] boat anchors, disrupting like the seafloor or the seagrass meadows," explained Amy Schmid, natural climate solutions development manager at Verra. "Or by looking at a similar area that is subject to the same stressors."

Carbon-offsetting schemes to fund forest conservation initiatives have been around since the 1990s. But new methodologies are needed to quantify carbon sequestration in marine environments — and this presents particular challenges.

On land, there is simply more data available, both from existing carbon crediting projects and because terrestrial environments are generally better studied, explained Schmid. "For blue carbon, in most cases, the higher-level, countrywide, or state or provincewide data on degradation or ecosystem conversion generally just doesn't exist right now," she said.

Verra said projects right on the cusp of land — such as the seagrasses — will be easiest to bring into the blue carbon framework, as there is solid data to show how they store carbon, plus they are more straightforward for Verra to compare to its 15 years of work in terrestrial environments. 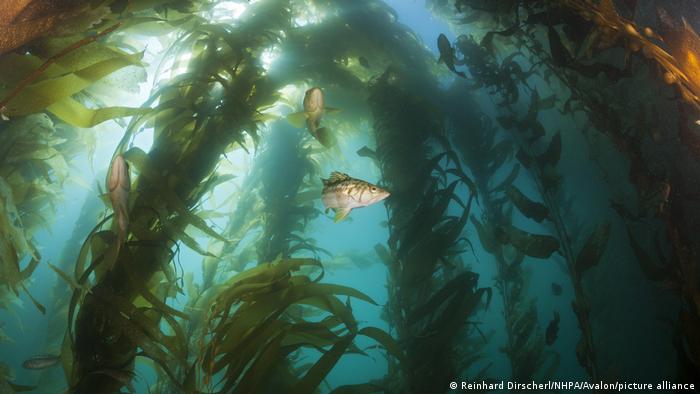 Kelp is a rich source of carbon ...

Acre for acre, marine ecosystems can sequester up to 20 times as much carbon as forest on land, by some estimates. But scientists are still working to understand how these carbon cycles operate, and the goal of incorporating "the whole seascape" still seems some way off.

More work to be done on kelp

Sarah Ward, living seas officer at the Sussex Wildlife Trust, said the conservation charity has received inquiries from carbon-pricing schemes interested in funding the work of Help Our Kelp, an initiative to restore a fast-disappearing kelpforest along 40 kilometers (25 miles) of the British shoreline.

But pricing kelp's carbon sequestration is complicated. Throughout its lifespan, seagrass lay down dense carbon deposits, trapping dead and decaying pieces of grass in their thick root systems. But though kelp absorbs plenty of CO2 as it grows, it casts off fleshy fronds each year — much like a deciduous tree — which are carried by ocean currents, meaning it isn't clear where exactly the carbon ends up. 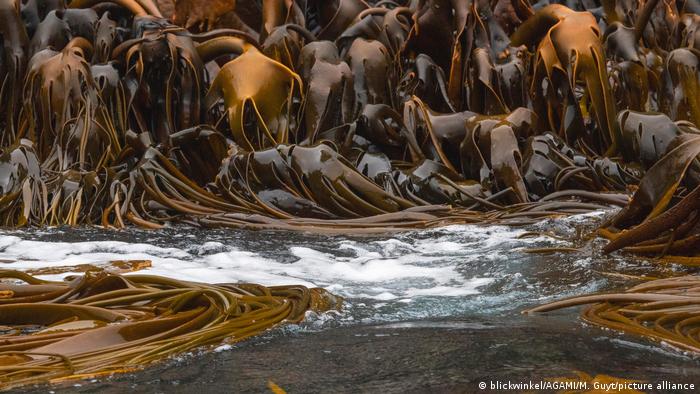 … but quantifying it is complicated

Ward said she has put off potential investors, warning that Help Our Kelp doesn't yet have the scientific evidence for long-term sequestration to sell carbon credits.

Steve Crooks, a coastal scientist who has been working to develop blue carbon programs for VCS and others over the last 15 years, said in cases like the kelp forests, carbon credits would only be sold on the basis of low-end estimates of how much carbon can be saved by their conservation. At the same time, Verra hopes to build the data over the years to come, to demonstrate where more can be sequestered.

"We have to create, effectively, insurance programs to make sure that the emissions removals are ongoing, and being removed from the atmosphere," Crooks said. "But, at the same time, we have to recognize that one of the big lessons is that carbon projects are complicated. And we need to be patient."