Forty years after its foundation, Greenpeace International Political Director Daniel Mittler tells DW that environmental issues are more pressing than ever and that pressure needs to be put on politicians to take action. 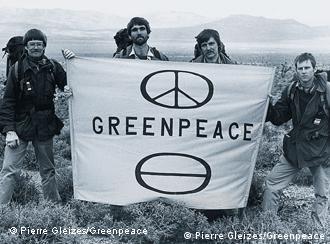 Greenpeace is celebrating its 40th anniverary

Daniel Mittler is the political director of Greenpeace International. He sat down to talk with Deutsche Welle about Greenpeace's priorities as the organization celebrates its 40th birthday.

DW: This week sees the 40th anniversary of Greenpeace International. What would you say has changed about the significance of environmental issues in the world? 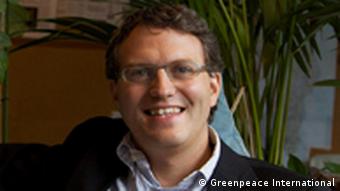 Passion remains at the heart of Greenpeace, Mittler said

Daniel Mittler: Many dismissed us 40 years ago as strange - or even as lunatics. What's changed is that environmental and sustainable development issues are no longer the concern of only a few. They're mainstream now. What hasn't changed is that a lot of the time it's just good words but no action, and it takes groups like Greenpeace to deliver and to force people to really find the solutions which we need for a green and peaceful planet.

How do you think Greenpeace as an organization has changed and developed over the last 40 years?

Forty years ago, when we started in Vancouver, Canada, we were small. Today we employ around 2,500 people around the world and one of our largest offices is in Beijing, China. That's clearly changed and reflects bigger changes in the world.

What hasn't changed, and what is ultimately more important, is what Greenpeace is about: passion. We still rely heavily on volunteers around the world. People are willing to put themselves on the line, to say, "This is enough, we need a different kind of development, a different way to do things in order for our children to survive." That hasn't changed in 40 years.

We were deliberately using media on our first expeditions against nuclear testing off the coast of Canada. But today we're using modern media like the Internet and YouTube videos to put pressure on players like Nestle or Volkswagen. But the essence of all of this is passion and the belief that small numbers of people, if they are united and find support in wider society, can change politics and can change our future.

There are a lot of other non-governmental environment organizations. How do you see Greenpeace in relation to them? 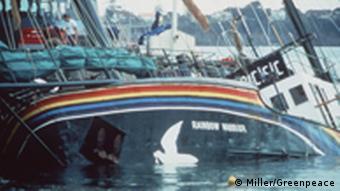 Greenpeace is special. We are completely independent. We rely on funding purely from the public, people who believe in what we do. We do not take money from corporations or governments, so Greenpeace is unique and proud of this independence.

But we always work with everyone who supports the agenda we stand for. We have no permanent enemies, and we have no permanent friends. We work with companies when they do the right thing. We just praised Puma, Adidas and Nike, for example, for committing to eliminating discharges of dangerous chemicals by 2020 from their supply chain. So when companies do the right thing, we stand ready to support them. The same is true for NGOs. We work very effectively for example at the international climate negotiations with other NGOs, with the Climate Action Network, and with many other coalitions like the "Global Call for Climate Action."

We know we cannot succeed if we are the only voice calling for the kind of change we need. But we are also proud of the particular role we can play and the independence we bring to our voice.

What are the most important challenges facing us?

The biggest challenge we face is climate change, that's for sure. Climate change is destroying our oceans, it's destroying our forests and it's undermining the livelihood of millions of people around the world who, for example, rely on agriculture. But the problem with climate change is that so many of our actions such as our energy use, our transport - everything we do - contributes to the problem. That has been a continuous challenge to address through politics, but also through direct action. Often people feel disempowered. "What can I do?" they ask. We are here to show people that it is possible to take a stand.

A field research project is following 90 Cologne-based households that are trying to change their lifestyles to help protect the climate. The state's consumer protection watchdog is keeping tabs on the volunteers. (12.08.2011)

A study by Greenpeace Germany says Japanese operator TEPCO failed totally in its handling of the Fukushima nuclear disaster. The company is also accused of having tried to cover up the true dimensions of the accident. (26.05.2011)