Synovate research institute and Deutsche Welle present the results of a global study on the potential threats associated with climate change. 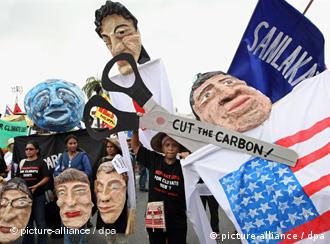 Climate activists rally to call for rich countries to pay their debt concerning on climate change, October 2009 in Bangkok

The recently-conducted “Synovate and Deutsche Welle Global Study on Climate Change 2010” has shown that people around the world still see global climate change as a major threat and extreme weather conditions as one of the major risks. Synovate surveyed more than 13,000 people from 18 different countries about the potential threats, the effects and the possibilities that exist to counteract climate change. The complete results will be presented at this year’s Deutsche Welle Global Media Forum. This year’s conference, entitled “The Heat is On – Climate Change and the Media”, will take place from June 21-23 in Bonn.

The first results of the study have shown that the majority of respondents (88 percent) believe that businesses carry the responsibility for the fight against climate change. But personal responsibility is also important: More than 70 percent say that they are already doing something to help in the fight or want to do so in the future. Around half of those asked are willing to invest in more environmentally-friendly products.

At the same time, the percentage of participants that aren’t worried at all has grown. In 2008, a similar study recorded 4 percent and that has now grown to 9 percent.

“International conferences haven’t produced any solutions so far and some of the basic scientific findings give reason to doubt,” says Steve Garton, who was responsible for the study from Synovate. “The results didn’t succeed in making the developments and the effects of the threats crystal clear to people around the world.”

Erik Bettermann, Deutsche Welle Director General, believes that the media has a huge responsibility: “The media must provide an objective and comprehensible view of the main topics for the future. At the same time, it will become even more important for journalists to advocate action from individuals with well-researched articles. They have to create a forum for the exchange of ideas and opinions and can’t get sucked in by people wanting to sell questionable catastrophe scenarios or by those who prematurely say the coast is clear.”

Many of the survey respondents believe that journalists have a responsibility as well. More than 50 percent sated that it is the media’s responsibility to not only inform the public, but to clarify climate change and its effects as well.

The “Synovate and Deutsche Welle Global Study on Climate Change 2010” is the third survey that Synovate has completed on this subject. Researchers relied on more than 13,000 respondents from 18 countries for the results, which were collected between February and May throughout the world – including Germany, France, Brazil, USA, China and South Africa.

In 2010, the Deutsche Welle Global Media Forum once again offers more than 50 events including podium discussions and workshops, interactive presentations and exhibitions, networking and interesting side events. It takes place at the World Conference Center Bonn, close to Deutsche Welle’s headquarters.

Deutsche Welle is cooperating with many different organizations for this interdisciplinary conference, including the United Nations Framework Convention on Climate Change (UNFCCC), the International Human Dimensions Program on Global Environmental Change (UN IHDP/ESSP), EU Commission and the World Bank, the Wuppertal Institute, World Wildlife Fund for Nature (WWF), NABU and the Climate Alliance, the Institute for World Business Kiel, German Development Institute (DIE), the Center for Development Research (ZEF) and many others.

Co-host of the Deutsche Welle Global Media Forum is the Foundation for International Dialogue of the Sparkasse in Bonn. The convention is also supported by Germany’s Federal Foreign Office, the Family, Women and Integration Ministry of the German state of North Rhine-Westphalia, European Funds for Regional Development, the city of Bonn, DHL, the KSB Group and Faber-Castell.