As delegates arrived in Copenhagen earlier this week, many environmental blogs are focusing on this iconic gathering of the world's top climate officials. 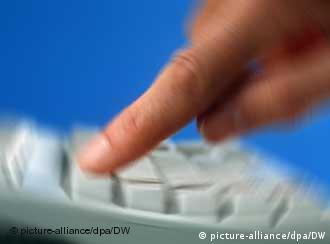 Bloggers around the world research, opine on climate change issues

One popular blog is Grist, which purports to make "lemonade out of looming climate apocalypse. It's more fun than it sounds, trust us!" Based in Seattle since 1999, the site draws hundreds of thousands of readers to its blog every month. While it's easy to get down on the lack of international cooperation in Denmark this week, out of all the environmental blogs we've been reading, this one seems to be the smartest and funniest one that we've seen so far. Obviously, Copenhagen is on the top of their agenda this week and the site has even sent a correspondent to the Danish capital. 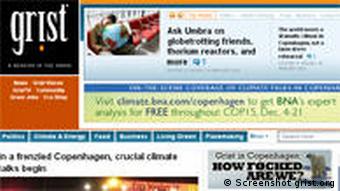 Grist sent a reporter to the Copenhagen talks

What is this Copenhagen thing? It's a gathering of negotiators from every United Nations member country who will try to come up with a plan to protect the world from catastrophic climate change. Two weeks to save the world!

On a more serious note is RealClimate, a site that offers coverage of "climate science by climate scientists." For the last five years, a Norwegian, a Swiss, a Briton and a couple of American scholars have offered clear, concise coverage of the climate crisis. They follow the news and provide easy-to-access links to their own and other related environmental research. Plus, many of their posts are often translated by volunteers into other European languages, including French, Portuguese and Spanish.

The problem of "false balance" in reporting - the distortions that can result from trying give equal time to the two perceived sides of an issue - is well known. In an excellent editorial a few years ago, the Seattle Post-Intelligencer called for a greater emphasis on truth, rather than "balance." Unfortunately, this basic element of careful journalism seems to have been cast aside, especially in recent weeks. TreeHugger has developed into a media network that covers environmental issues

TreeHugger is one of the largest and most widely-tracked environmental blogs. A team of over 55 writers living all over the world pump out over 35 posts per day, including both news and features, on topics as diverse as icebergs floating toward New Zealand, and how Coca-Cola is getting rid of hydroflourocarbons in all of its vending machines by 2015. There's even more practical tips too, like how to determine whether an artificial or a live Christmas tree is better for the environment.

Yes, they seem tacky and don't make your house smell like a coniferous forest but they also won't dry up and shed their needles all over the place before spontaneously combusting. Also, if you cut down a tree in the forest aren't you are taking away its ability to sequester carbon for many years to come? So, from the perspective of a world that already has more carbon dioxide than can take, which is better, a cut tree or a fake one? 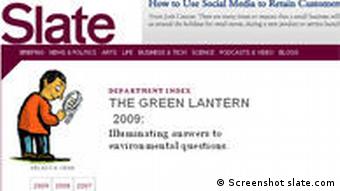 For over two years, the American online magazine Slate has offered up an advice column for the climate-conscious. Just like relationship, etiquette and sex columns, The Green Lantern offers intelligent, concise suggestions for how to live a greener life. Recent questions have dealt with the proper way to dispose of pharmaceuticals, what the environmental impact of going into space is, and a potentially dicey one: how green is tofu?

Last year, the Dutch government commissioned a study of the environmental effects of vegetarian "meat substitutes," including veggie burgers, Quorn, and tofu. According to the analysis, a kilogram of tofu sold in the Netherlands produces about two kilograms of carbon-dioxide equivalent (PDF) from the farm to the supermarket. That's only a little less than Dutch chicken, at 3 kilograms of CO2-equivalent per kilogram of meat. Mackerel, herring, pollock, and mussels—some of which the Lantern has already championed as low-carbon options for seafood lovers—scored about the same or better than tofu. That's a much smaller difference than the Lantern would have expected.

Check out DW's coverage of the climate talks and environmental issues.

A new tech-savvy generation of Africans has filled the blogosphere. Their politically conscious blogs take on development and the politicians running their nations, creating a new brand of citizen journalism. (07.12.2009)