London Heathrow airport planned to build a third runway to cope with growing air travel. But environmental activists have successfully won a court case against the expansion of one of Europe's busiest airports. 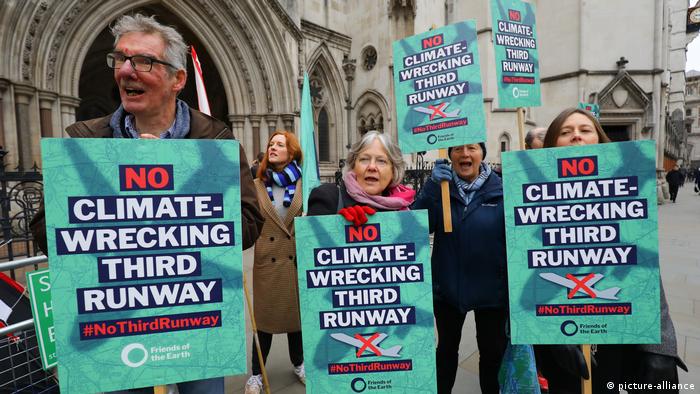 Environmental campaigners won a court ruling on Thursday that is set to block London Heathrow airport from building a third runway.

The $18 billion (€16.4 billion) project got the go-ahead from the UK government in 2018. Environmental activists and local authorities have been fighting the decision in the courts amid concerns over noise and emissions pollution, as well as breaking government climate change commitments.

The UK Court of Appeal ruled the government's agreement to the expansion was 'unlawful' as it did not comply with climate change commitments it made when it signed up to the 2015 Paris Climate Agreement.

The government will now have to re-write the policy statement or scrap the proposal.

"We really are facing a climate emergency and it's about time the government started taking action to address this."

Leader of the local Richmond Council Gareth Roberts said: "It surely must be the final nail in the coffin for Heathrow's attempts to steamroll over local and national opposition to their disastrous third runway plans." The planned flight path for the third runway would be over his borough.

Heathrow said it plans to appeal to the Supreme Court and it is "confident it will be successful."

Global warming-causing carbon emissions are reportedly set to more than double in price. It's a step in the right direction, say some climate activists, but others say the compromise still falls short of demands. (16.12.2019)

Greenpeace and other environmental groups had hoped to stop the Norwegian government from granting oil field exploration licenses. The groups argued this violated the Norwegian constitution and the 2015 Paris Agreement. (23.01.2020)