Cambodia has the lowest rate of toilet coverage in Southeast Asia, leading to disease, environmental problems and hindering economic development. Tackling its sanitation problems is one the country's biggest challenges. 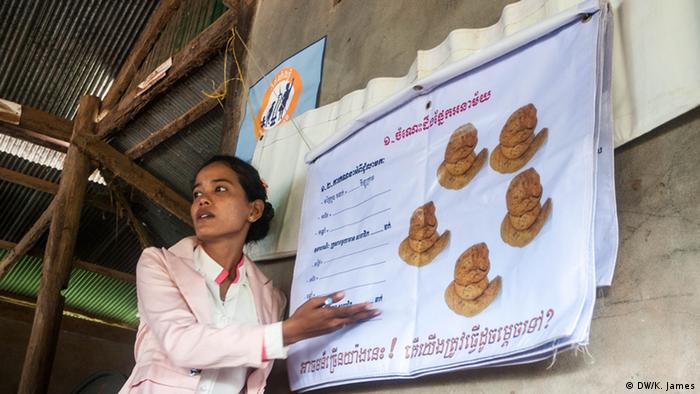 In the village of Damnach Trach, about an hour outside of Phnom Penh, villagers have gathered to talk about poop. Under a covered shelter to keep out the blistering tropical sun, Sam Vanna from the sanitation NGO WaterSHED explains how human excrement can pass disease.

Vanna then calls on a local farmer to demonstrate how he takes care of his business when nature calls. The farmer, Nu Sokhom, promptly squats as the crowd bursts into laughter.

"We let them have fun," Vanna said. "But I also talk about the reality and what really happens."

What happens in Cambodia is disease and preventable illness resulting from open defecation, a very common practice in rural parts of the country, where 80 percent of people do not have toilets. Most people in the countryside simply defecate in fields or nearby forests, something they've done for generations. 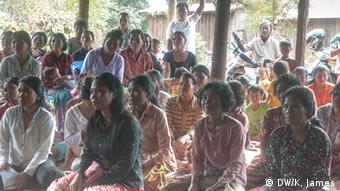 Around 75 villagers gathered to hear a presentation about defecation, disease and toilets

"They don't know how to do anything else," Vanna said. "So I try to bring out the difficulties they face every day and how a latrine can solve the problems."

WaterSHED works on sanitation issues in Cambodia, Laos and Vietnam. For several years now, the organization has been sending representatives to rural villages to educate people about the importance of toilet use and offer them easy ways to get their own household latrines.

Open defecation contaminates the soil, air and water, both above and below ground. And it leads to serious illness and diarrhea. In Cambodia, one in eight children won't reach their fifth birthday due to infectious disease, much of it preventable. Farmer Nu Sokthom, the man who was pretending to defecate in front of the villager group, knows of the difficulties first hand.

"I have to go very far from my house [to use the toilet]," he said. "If it’s raining, I get wet and I get sick. My family also gets sick a lot."

This is a common refrain heard from both rural folk and sanitation experts. Diarrheal disease - one of the most common illnesses resulting from poor sanitation - is one of the basic killers of children under five years of age worldwide, more so than malaria, tuberculosis and HIV combined, according to Yi Wei, a sanitation expert from International Development Enterprises (IDE), an international NGO also trying to boost hygiene in the developing world.

"Recently there's been research showing that poor sanitation leads to stunting and poor growth in children," she added. "That’s an emerging field that we’re trying to look at as well."

Besides these serious implications for health, poor sanitation can affect the larger economy. It's estimated that about 7.2 percent of Cambodia's GDP, or $448 million (332 million euros), is lost due to sanitation-related problems, such as driving away tourists to hurting productivity as people have to take off work because of illness. 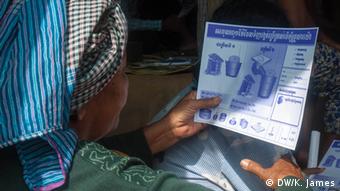 Villagers pay to have simple, low cost toilets installed in their homes

According to a recent World Bank study, a rural Cambodian family loses almost $70 a year due to illnesses caused by poor sanitation and hygiene, more than most make in a month. In urban areas, it's around $40.

"If a household is earning money but getting sick continuously, it's like a sieve. You're throwing money but it's continuously draining out," said Cordell Jacks, head of IDE's global sanitation program. "Improving the health of these households is extremely important to poverty alleviation."

The importance of good sanitation management to development can be seen elsewhere in the region. In Singapore, for example, by 1970, 90 percent of the country's population had piped water in the homes. By 1990, all households were connected to the sewage system. Over the next decade, full sewage treatment came online. Experts say this comprehensive infrastructure improvement spurred the city-state's economic development and helped it become the success story it is today.

A WHO study has found that every dollar spent on improving sanitation generates an average economic benefit of $7.

Cambodia, on the other hand, experienced decades of conflict in the latter half of the 20th century. The genocidal rule of the Khmer Rouge in the 1970s set the country's development back decades, if not more. Much of the country lacks basic services, such as electricity and water. The great majority of rural villages do not have plumbing. And the government is only recently showing real interest in improving sanitation. All those factors have resulted in Cambodia having the lowest toilet coverage in Southeast Asia, according to UNICEF.

But while rural areas in Cambodia are especially hard hit by poor sanitation, urban areas are struggling as well. In Phnom Penh, raw sewage is transported through an open canal in a densely populated part of the city, and it sometimes floods during rainy season. Eventually the smelly sludge makes it way to a pumping station before passing over a spillway into a city lake and then emptying into two of the country's major rivers. 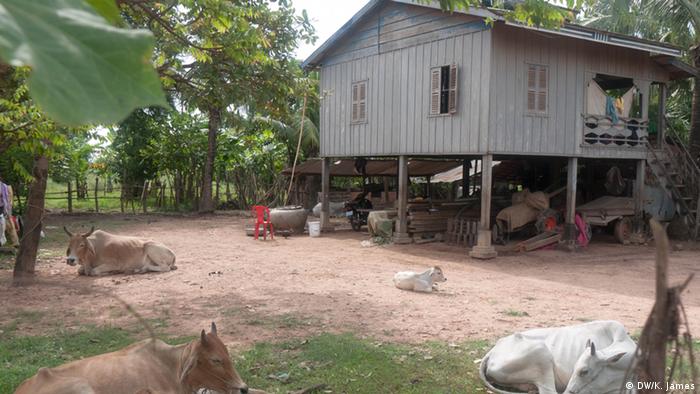 Most Cambodians in the countryside live in traditional houses like this one. Many of them do not have toilets

As the city's population has doubled in the last 15 years, this antiquated, inefficient system is buckling. The UN has called it a threat to the urban environment and to human health.

In the Cambodian countryside, the defecation presentation by WaterSHED is wrapping up. Villagers are handed an information sheet on a simple latrine that can be installed outside their homes. It costs $50, which is a significant amount of money for these families. Incomes generally average around $60 a month.But in the end, 58 people place orders and they will apply for loans from microfinance institutes or set up payment plans with the local toilet suppliers.

Toilets aren't given away for free

This market-based approach, asking them to pay local businesses to install their toilets, is called hands-off sanitation marketing. It has proven more successful than previous programs, when NGOs would go to a village and give toilets away for free.

"If people buy [the toilet], they will install it and use it because they feel ownership of what they pay for," said Phav Daroath, WaterSHED's marketing manager. He said if they got it for free, that put less value on it, and perhaps use it for a while, but then go back to their old ways.

In addition, there's an aspirational aspect to the approach. If one's neighbor has a toilet, it carries some prestige, especially if a family can offer guests a sanitary place to relieve themselves. The pride factor is a key element, sanitation experts say. 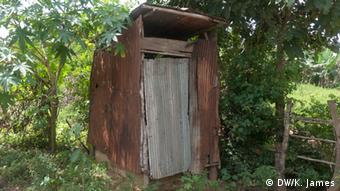 An outhouse in a field - a fairly rare sight in rural Cambodia, where many practice open defecation

While the WaterSHED program has resulted in the installation of 50,000 latrines over the past two years - and several other NGOs are running similar programs - the majority of Cambodians still live with poor basic sanitation daily.

The UN's Water of Life Decade, running from 2005 to 2015, has a goal of reducing by half the proportion of the population without sustainable access to safe drinking water and basic sanitation. But in Cambodia, it's not likely that target will be met. And until sanitation significantly improves, experts say other development goals, such as education, nutrition, environmental sustainability and a host of others, will be all that harder to reach.

Donors shy away from toilets

Two and a half billion people do not have access to clean and safe toilets. Yet aid agencies are struggling to find funds for sanitation and hygiene projects. (19.11.2012)

A new report from the World Bank says African countries are losing billions of dollars every year by not investing in sanitation. The study calls on leaders to put more emphasis on sanitation. (17.04.2012)

Recent census data in India revealed that more homes have telephones than toilets. The figures shed light on the contradictions in a country that is experiencing an economic boom while struggling with poverty. (21.03.2012)

A campaign organized by UN Water calling on member states to increase efforts to meet the Millenium Development Goal target of halving the number of people living without proper sanitation by 2015.