Citizenship Tests to Become Compulsory Across Germany in Fall | Germany| News and in-depth reporting from Berlin and beyond | DW | 11.06.2008

Citizenship Tests to Become Compulsory Across Germany in Fall

From September 1 onwards, anyone applying for German citizenship will first have to pass a citizenship test. But the opposition and migrant organizations have criticised the point of the exercise. 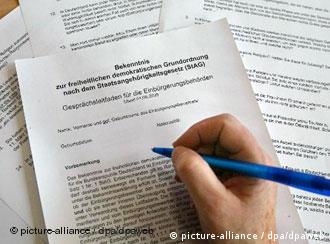 Would-be citizens will have to go back to the classroom

The multiple choice test will cover such areas as Germany's political system and society, as well as German history. The 33 questions will be picked at random from a list of just over 300. Would-be citizens will have to answer just over half of them correctly.

With the number of people applying for German citizenship in steady declining over recent years, some critics have disputed the necessity of the examination. Others have questioned the sense of something that simply rewards rote learning. 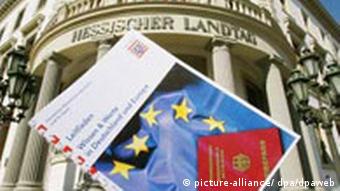 The states of Bavaria, Baden-Wuerttemberg and Hesse have pressed for the test

Green party parliamentarian Josef Winkler described the test as a "spurious solution for a spurious problem" in an interview with the Financial Times Deutschland.

The Left Party vice chairwoman Halina Wawzyniak also described it as "superfluous". She called for a comprehensive overhaul of citizenship laws and the relaxation of rules on dual citizenship.

The Free Democrats' integration expert Sibylle Laurischk criticized the content of the test. "Anyone who can learn stuff well off by heart can easily pass a formulaic test of this nature," she told the FTD.

She called for a flexible approach when evaluating test results, stressing the greater importance of having a good command of the German language.

The chairman of the Turkish community in Germany, Kenan Kolat, has described the test as a "procedure to select between the educated and the uneducated". He said that lower-class migrants would be unable to pass.

In an interview with the epd news agency, Kolat accused Germany of creating more and more new hurdles to obtaining citizenship, causing migrants, as a result, to increasingly become disaffected. 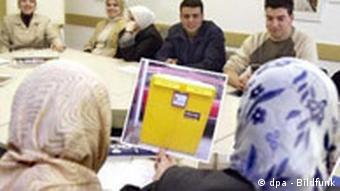 He said the test reinforced "the feeling of being a foreigner" and predicted a further drop in the number of people applying for citizenship.

An interior ministry spokesman defended the examination. He said that citizens had both rights and duties. Citizenship tests exist in a number of other European Union countries, including the UK and the Netherlands.

But organizational difficulties could still stand in the way of the punctual launch of the test. The questions are still being worked on and are not due to be published until the cabinet have approved them in late July or early August. Ulrich Aengenvoort, the director of Germany's Volkshochschulen (VHS), the educational institutes charged with conducting the test, conceded that the timetable was tight. However, he said he was confident that the VHS would cope.

A senior figure in Chancellor Merkel's conservative party has focused his re-election campaign in a regional poll on crime, in particular offenses by foreigners. It's not the first time the party has used such tactics. (07.01.2008)

Reformed citizenship laws mean that, starting this year, young Germans with immigrant backgrounds who have thus far had dual citizenship will have to choose between being a German or a foreigner. (03.01.2008)

Click here, to hear more reactions to the planned introduction of the new tests.