Squeezed in State Poll, German Politician Pulls Out Old Tricks | Germany | News and in-depth reporting from Berlin and beyond | DW | 07.01.2008

A senior figure in Chancellor Merkel's conservative party has focused his re-election campaign in a regional poll on crime, in particular offenses by foreigners. It's not the first time the party has used such tactics. 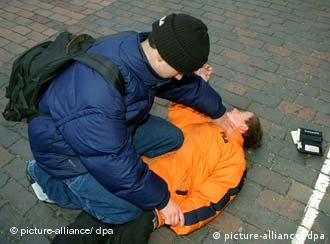 "We have too many criminal young foreigners," Koch has said

Seeking a third consecutive term as leader of the prosperous western German state of Hesse, Roland Koch has made immigration the centerpiece of his campaign, stirring memories of a similar election bid almost a decade ago.

Facing a strong challenge from his Social Democratic challenger who is focusing on demands for a national minimum wage, Koch has seized on a recent violent attack on a German pensioner by two young immigrants on a Munich subway train to call for the deportation of "criminal foreigners" and urge an end to "multicultural" coddling of immigrants.

The attack, which left the 76-year-old victim with a fractured skull, was captured on close circuit cameras and aired for days on German television. 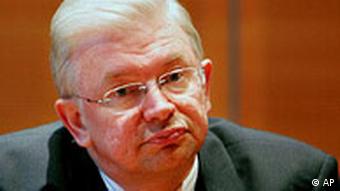 Koch is no stranger to controversy

"How much are we prepared to take from a small proportion of violent youths, who frequently have a foreign background?" Koch, once a rising star but now struggling, told mass circulation tabloid Bild. "We have spent too long showing a strange sociological understanding for groups that consciously commit violence as ethnic minorities."

Koch's comments on young immigrant criminals follow a proposal last month for a ban on students wearing the all-encompassing burqa in schools even though there was no reported incident of it.

While Koch's comments have sparked an outcry among left-wing politicians and immigrant groups and fuelled a heated debate on juvenile crime, political observers point out that it's not the first time the Christian Democratic Party (CDU) has used anti-immigrant rhetoric to gain political mileage.

"The CDU is a highly pragmatic party that doesn't shy away from using the anti-foreigner card to reinforce prejudices and appeal to right-wing elements in the population," said Peter Lösche, a retired professor of political science at the University of Göttingen. "It's done it before and had success with it."

In 1999, Koch used criticism of immigration to oust a center-left administration and win the Hesse state election. He launched a successful signature campaign in which his party hit out against federal government plans to introduce dual citizenship for foreign citizens living in Germany. 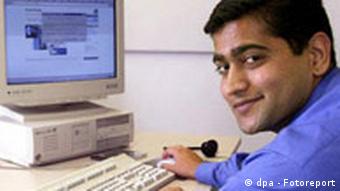 In 2000, another CDU politician, Jürgen Rüttgers, of North Rhine-Westphalia, Germany's most populous state, unleashed a campaign against proposed "green cards" for Indian software engineers. His slogan, "Kinder statt Inder" or "Children Instead of Indians" referred to a preference for home-grown IT talent over skilled foreign workers. While he failed to win that election, he did become the state's premier in 2005.

Germany is home to 15 million people of immigrant background, making up about 18 percent of the population. Most of them came as foreign "guest workers" from Turkey and Italy to help rebuild the country after the war and stayed on.

Many takers for anti-immigrant rhetoric?

Some point out that Koch's populism and anti-immigrant campaigning is not out of place in Hesse, home to around 6.1 million people and the city of Frankfurt, one of Europe's major financial markets.

"The CDU in Hesse has always been a law and order party and is known for its ultra-conservative wing," said Gero Neugebauer, a political scientist at Berlin's Free University. "Koch's current campaign is an obvious attempt to mobilize this hard core of its supporters who the CDU fears it might lose to far-right parties."

While far-right parties are largely successful in former communist eastern Germany -- the anti-immigrant NPD is represented in two of five state assemblies -- experts underline that xenophobic tendencies also exist among voters of mainstream political parties in the western part of the country.

"Hostility against foreigners and immigrants is equally widespread in western Germany, too," said Elmar Brähler from the University of Leipzig, who carried out a study in 2006 for the Friedrich Ebert Foundation on right-wing extremism in Germany. "The phenomenon is worst among those over the age of 60." 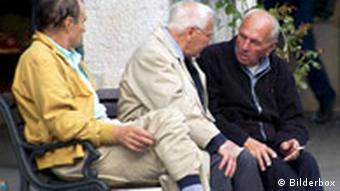 Around 68 percent of the CDU's members are older than 50

Analysts say it's no coincidence Koch is appealing to an older generation of conservative voters who are increasingly important to his re-election bid and those of conservative premiers in other states.

"Whipping up fears about security after a brutal attack on the Munich subway is a sure tactic of getting the attention of these older voters," Neugebauer said.

Minimum wage may be a vote-getter this time

While Koch's anti-foreigner rhetoric has put further strain on his party's uneasy grand coalition with the Social Democrats at the federal level, experts say Chancellor Angela Merkel is unlikely to publicly rein in Koch for fear of losing an economically and politically important state that the CDU has ruled for almost a decade.

Polls indicate that the SPD has made huge gains in Hesse and that Koch is struggling to keep his absolute majority.

Merkel herself has talked often about the need to integrate the country's 2.3 million Muslims, most of who are of Turkish origin, but says immigrants must accept German culture. An opponent of Turkey's EU membership, Merkel won thunderous applause at a recent party conference for saying mosques should not dwarf churches. 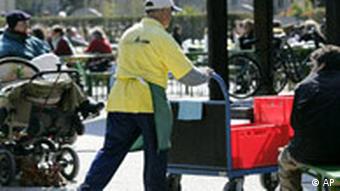 Some say voters are more interested in getting decent wages

While the outcome of the election in Hesse is still open, some believe that the CDU's tactic of using stirring fears of immigration as a vote-getter may no longer work this time.

The SPD's push for a national minimum wage in an effort to dethrone Koch -- it's opposed by Merkel's CDU -- has wide public support and comes at a time when fears about economic uncertainty are growing, said Richard Stöss, a politics professor at Berlin's Free University.

"Hesse is home to lots of industry and factories and an issue like a national minimum wage is likely to resonate far better with voters than fears of immigration," he said.

German Chancellor Angela Merkel's party called on Saturday, Dec. 5, for tougher action against juvenile offenders and steps to make it easier to deport foreign criminals from the country. (05.01.2008)

Reformed citizenship laws mean that, starting this year, young Germans with immigrant backgrounds who have thus far had dual citizenship will have to choose between being a German or a foreigner. (03.01.2008)

What do you think of Roland Koch's election campaign? Please include your name and country in your reply.