Christmas in Europe? Germany's holiday markets quickly come to mind. After the attack on a market in Berlin, we look at the centuries-old history and meaning of Christmas markets for Germany. 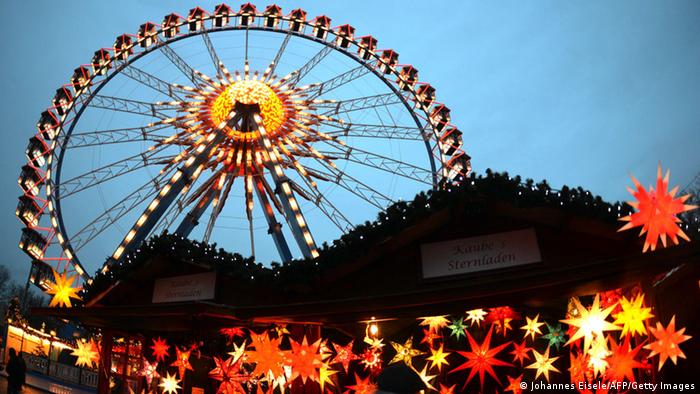 When locals and tourists come to sip mulled wine and purchase hand-made Christmas presents at Germany's holiday markets, they are participating in a tradition that has been around for centuries - and has even become more beloved lately. Some 85 million people visited German Christmas markets in 2012, up from 50 million in 2000, according to the most recent statistics.

Even before Christmas markets began, winter markets were held in Europe during the Late Middle Ages. At that time they usually took place over just several days, rather than weeks; the markets were an opportunity for residents to come together, trade food and handicrafts, and stock up for the coming winter months.

While the markets didn't initially have a strong Christmas focus, people started using them to purchase baskets, toys, wood carvings and baked goods for Christmas.

During the Middle Ages, German-speaking Europe was made up of numerous principalities - the nation of Germany wasn't created until 1871. The markets differed slightly from region to region, and some of that local flair has been preserved among the over 1,400 markets in Germany today.

The city of Dresden boasts what is most likely Germany's oldest official Christmas market. According to the official website of the "Striezelmarkt," as Dresden's market is known, the first event was approved by Frederick II, Elector of Saxony, to take place in 1434. It lasted just one day. 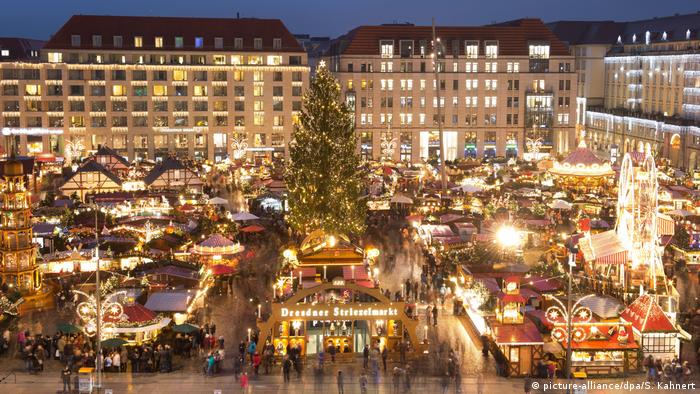 The Striezelmarkt in Dresden is the country's oldest Christmas market

Grilled meats play an important role in today's Christmas markets, as apparently they did in 1434, too. The first Striezelmarkt was a meat market, where residents could purchase their Christmas dinner, which would end their Advent fast.

Now in its 582nd year, the Striezelmarkt is known for its Dresden Stollen festival, during which the world's largest Stollen cake is baked every year. A 14-meter Christmas pyramid - a large version of a traditional holiday decoration from the nearby Erzgebirge region - graces the middle of the market and serves as an unmistakable landmark.

In response to Monday's attack on a Christmas market in Berlin, however, authorities have erected a temporary cement wall around the market - to the chagrin of many locals. Closing Germany's borders would eliminate the need for a wall, commented some users on Twitter. This user wrote: "'We're making cement mobile.' Saxony responds to the attack in #Berlin by building a wall. Striezelmarkt in Dresden is secured with concrete."

Among Germany's oldest Christmas markets is the Christkindlesmarkt in Nuremberg - arguably also the country's most famous abroad. Michael Fraas from the Nuremberg finance bureau told DW that the first written reference dates back to 1628.

While the Christkindlesmarkt is named for the Christ Child, the figure is traditionally represented as a female angel rather than Baby Jesus. Every two years, the city chooses an adolescent to play the angel and open the market by reading a Christ Child poem in the Church of Our Lady.

Since Nuremberg was a center of the spice trade, "Lebkuchen" (gingerbread cookies) became particularly popular there. The Christkindlesmarkt has also become known for its "Zwetschgenmännla," souvenirs that are edible figures intricately decorated with dried fruit.

While the market lost its significance in the 19th century, it was rejuvenated by the Nazis during the 1930s when Nuremberg was the site of the Nazis' large propaganda rallies. While the Christkindlesmarkt was canceled during World War II, it reopened in 1948 and now hosts at least two million visitors a year. Faas told DW that Nuremberg saw a record number of visitors last year - 2.2 million - shortly after the terror attacks on November 13, 2015 in Paris.

"I will be going with my children to the Christmas market over the next few days and won't worry," he said. The Christ Child, depicted as an angel, opens the market in Nuremberg

In her study on "Martin Luther and the festive customs," Erika Kohler writes that, since 1531, Luther gave gifts to his family in the name of the "Holy Christ," according to luther2017.de, the organizers behind the year-long celebrations set to begin next month that mark the 500th anniversary of the reformer's 95 theses. "With his rejection of the veneration of saints he is said to have supplanted Saint Nicholas as the giver of gifts. The more the Reformation spread, the more Saint Nicholas was replaced by the Christ Child."

While many people in Germany still observe St. Nicholas Day by putting chocolate in children's shoes, Christmas has indeed become the primary day of gift-giving. Whether or not Martin Luther boosted gift sales at holiday markets, they have solidly established themselves as an Advent tradition.

Markets bring together old and new

It was in the 20th century, however, that the markets became entertaining events, according to German tradition expert Manfred Becker-Huberti. "These days, the music and the offerings are there to create an atmosphere that makes people happy," he told DW.

Many Christmas markets in Germany do that by drawing on the centuries-old tradition, such as those in Rothenburg ob der Tauber, a largely preserved medieval town in Bavaria, and in Quedlinburg, a UNESCO-listed city known for its some 2,000 timber-framed houses.

Nearly every town and village hosts a market each year, and in larger cities, markets can be found in every district. Some take a more modern twist, catering to the LGBTQ crowd or offering vegan specialties, for example.

As the capital, Berlin is home to some 80 Christmas market each year. Every tourist is likely to pass through the Alexanderplatz square in downtown Berlin, where the "Winter Dream" market takes place.

Those hoping to escape the big city hustle and bustle make their way to the Lucia Christmas market in the courtyards of the Kulturbrauerei in Berlin's Prenzlauer Berg district. Named after Lucia, the Nordic goddess of light, the market is dedicated to Scandinavian countries.

Meanwhile, the Gendarmenmarkt typically features places to wine and dine as well as enjoy the stage show.

On Tuesday, out of respects for the victims of Monday's attack and their families, all of Berlin's Christmas markets were encouraged to close for the day.

The market at Breitscheidplatz, where the attack took place on Monday, has taken place for the last 33 years and sees some one million visitors per year. With its large illuminated tree and intense decorative lights, it is considered one of the prettiest and most beloved of the Christmas markets in Berlin.

Gaby Reucher and Max Zander contributed to this report.

On December 19, 2016, an Islamist extremist rammed a truck into the Breitscheidplatz Christmas market in Berlin. DW reporter Christina Küfner met a trader who barely survived the attack.

One person is dead and several others are seriously injured after a car drove into a crowd on a busy shopping street in Berlin. The incident took place across the street from where a truck ploughed through a Christmas market in 2016.