Christians in a Pakistani village threatened: ′Convert or Leave′ | Asia | An in-depth look at news from across the continent | DW | 13.05.2016

In another incident of persecution of minorities in Pakistan, the Christian community in a Punjabi village faces the chill wind this time. Despite the intervention of the authorities, the residents fear for their lives. 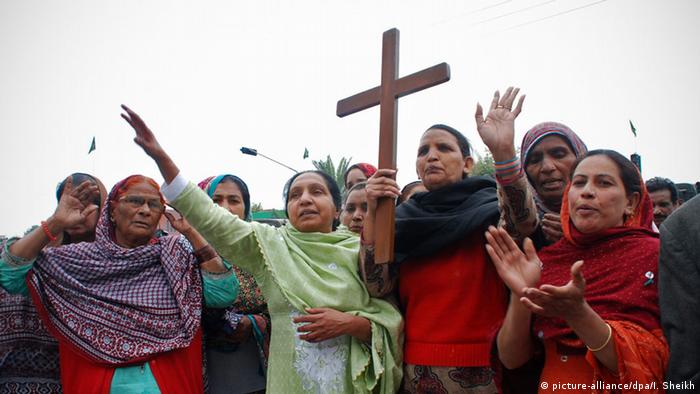 Christian residents of Chak 44, a village in the Punjab province, have been presented with options either to convert to Islam or leave the village. Members of the Christian community of the village landed in trouble after Imran Masih, a Christian resident, was accused of committing blasphemy. Masih, along with his family, has left the village and gone into hiding.

Masih, a sanitary worker at the rural health centre (RHC), was accused by a co-worker of committing blasphemy by watching controversial content on his phone. This led to a Muslim mob threatening the Christian families in the village, until police intervened.

As a result, over half of the Christian population has already left the village while the remaining ones are in the process of doing so, Yaqoob Iqbal, a Christian resident of Chak 44, told DW.

A social and economic boycott? 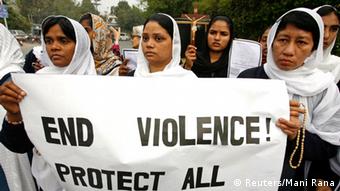 Christian women protest after a suicide attack on a church in Lahore, March 2015

Saleem Iqbal, director of the NGO Care Council for Human Rights, says the village's Christian community is in a tight situation. "They are facing a complete social and economic boycott as no shopkeeper is selling anything to them," he told DW.

So they have to travel to neighboring villages to buy essential supplies, the activist added. Moreover, landlords have demanded immediate settlement of all outstanding loans given to Christian farmers, noted Iqbal.

Meanwhile, the local mosque committee announced PKR 100,000 (around $955) for anyone who gives information about Masih's whereabouts and PKR 200,000 for his arrest.

Local police officer Zafar Iqbal told DW that a committee had been set up to look into the issue. He added that police officials have tried to resolve the matter in a peaceful way. 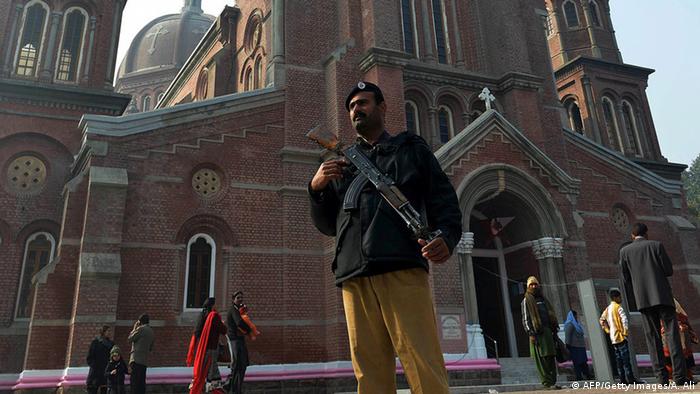 A policeman stands guard at a church in Lahore, the capital of Pakistan's Punjab province

Christian residents of Chak 44, however, disagree.

Yaqoob Iqbal, who also represents the Christian Community in the village, told DW: "We are totally unsatisfied with our lives and the fact of the matter is that despite the efforts of the police officials, extremists can attack us any time."

Pointing out that blasphemy is a sensitive issue in Pakistan, he stressed that minorities could be attacked any time despite the assurances from the police. 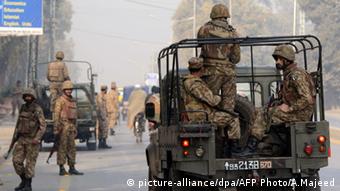 Security forces patrol the streets outside the Saint John's Church in Peshawar, December 2014

Religious discrimination and persecution are serious problems in Pakistan, says Zaman Khan of the Human Rights Commission of Pakistan (HRCP), a non-government organization not affiliated with the government. Christians, Hindus and Ahmadi Muslims are routinely discriminated against in Pakistan, he told DW. "Though I appreciate the timely intervention of the law enforcement agencies to avoid another major incident, there still are apprehensions and an attack on the local Christian community can still occur."

Khan cited a past incident, where an entire village was burnt, to explain the fear engulfing the Christian residents.

The expert believes that it will take a considerable amount of time to change the mindset of the Pakistani masses, who, in fact, are prone to violence - particularly against religious minorities.

"In order to change the mindset, bold and radical measures will have to be taken consistently and for a long time. I do not think the past and the present administrations have been doing enough and neither do I think the future administration will," he concludes.

Pakistani authorities have rounded up at least 350 suspects for alleged links with Islamist extremists Tuesday. The crackdown follows a deadly Taliban bombing that claimed over 70 lives on the weekend. (29.03.2016)

Pakistan has been shaken by a suicide blast in the eastern city of Lahore and a violent right-wing protest in the capital Islamabad. Where is the country headed? Experts say this is likely just a taste of what's to come. (28.03.2016)

The militant group has threatened more attacks across the eastern city of Lahore, calling it a message to the prime minister. A police official told DW that the "terrorists wanted to target innocent people." (27.03.2016)

Christian protesters have pelted security forces with stones and blocked roads in Lahore during the riot sparked by deadly weekend bombings. Islamabad has deployed troops to restore the peace. (16.03.2015)

The Pakistani government wants to spend billions of dollars on the Ravi River Urban Development Project. But the plan has left opponents counting the cost to the environment in nearby Lahore.

Despite recent efforts to curb abuse, students in Bangladesh, India and Pakistan still face violence in classrooms. Some laws have been passed to ban the practice, but advocates say legal efforts are still not enough.

Rights activists in Pakistan have hailed a Lahore court's decision to outlaw intrusive rape tests in sexual assault cases. They demand that other anti-women laws also be scrapped.