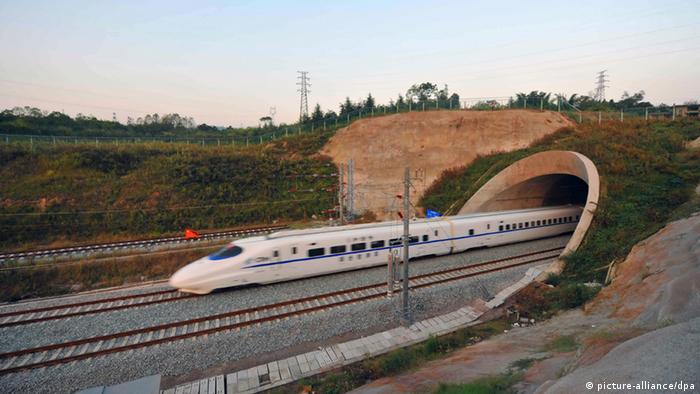 Siemens CEO Joe Kaeser came up with a great idea this summer and got in touch with executives at the French multinational company Alstom to suggest it avoid from being swallowed by General Electric by partnering with Siemens. Kaeser proposed to his French colleagues that Germany's high speed ICE trains be built in France along with its own TGVs, and that Alstom hand its energy unit over to the Germans in return. Alstom's final decision is no secret. It ended up opting for the US solution - and both ICE and TGV are about to start hurting.

Where the Europeans failed, the Chinese have now succeeded. CNR and CSR, China's two train makers, which are respectively the world's largest and second-largest train makers, recently announced plans to merge in a move that will make them a powerhouse in the high-speed rail industry. No further details have been revealed, but initial estimates indicate that the merger will boost the two companies' profits by 14 percent, thanks not least to lower research and development costs as well as a less cut-throat price war.

When the government effectively let the two state companies loose on one another in 2000, its hope was that competition would raise their game. In the wake of China's modernization and the push to boost ties between far-flung regions of the country, the increased competition has borne fruit. But now that CNR and CNS are both looking for contracts abroad, that competition has become something of an impediment. Beijing would rather the two companies weren't held back by a price war: in 2011, a contract from Turkey ended up going to a South Korean company, followed two years later by another from Argentina.

Too many cooks spoil the broth. Which is why Beijing is keen to see a joint effort made to secure lucrative train manufacturing contracts abroad. In California, for example, both companies have separately announced their interest in a project worth $68 billion. Were they to join forces, their chances of sealing a deal to supply trains for a high-speed rail network would be significantly increased.

Needless to say, both companies already boast major international clout. Wherever Chinese Premier Li Keqiang has gone in recent months - be it to South America, Africa or Russia - he has managed to sell CNR and CSR trains. Beijing also signed declarations of intent with Britain and Thailand this year, as well as consolidating plans for an 800-kilometer track from Moscow to Kazan in eastern Russia - a contract Siemens and Alstom had their eye on. In this case, their hopes were dashed by the EU's sanctions against Russia.

Beijing's latest contract coup is in Central America. The Mexican government recently announced that China would be building a new high-speed link between Mexico City and Queretaro, an industrial city located some 200 kilometers further north. The project will cost Mexico $3.75 billion, and one of the main reasons why the contract went to China was because it declared itself willing not only to build the rail line but also finance 85 percent of the project with the Import Export Bank of China.

Beijing's willingness to come up with an enticing credit proposal for the financing model when it sells Chinese high-speed trains abroad goes down especially well with emerging economies.

Formerly dominant train makers such as Alstom, Siemens and Canadian company Bombardier are not always in a position to match this sort of all-inclusive package. The slated merger between CNR and CSR is only going to shift the balance of power further in Beijing's favor.

Beijing and Moscow: Friends in need?

With ties between the Kremlin and the West reaching a freezing point and the Russian economy struggling under sanctions, Moscow has turned to Beijing and signed dozens of energy and finance deals. (14.10.2014)

German rail operator Deutsche Bahn is to receive a multi-billion euro cash package for its ageing infrastructure. The money comes from DB's owner, the German state, which has ignored the rot for many years. (16.10.2014)