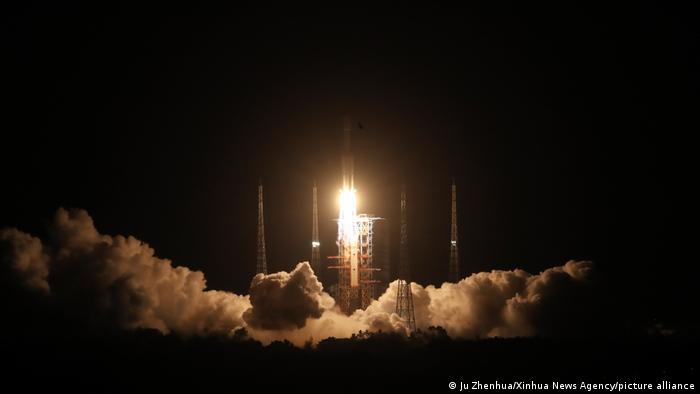 China is building is own space station to rival the ISS, which will be ready by 2022

Tianzhou-2 or "Heavenly Vessel" blasted off via a Long March-7 Y3 rocket from the Wenchang spaceport on the southern Chinese island of Hainan on Saturday. Its journey to the Tianhe station took approximately eight hours.

Tianzhou-2 was supposed to be launched last week but liftoff was delayed at the last minute due to a technical fault.

The spacecraft is the second of 11 cargo missions needed to complete China's first self-developed space station, due to completed in 2022, and follows the launch of the key module Tianhe in late April.

In order to complete the Chinese space station, two laboratory modules, each weighing a good 20 tons each will need to be brought into space. 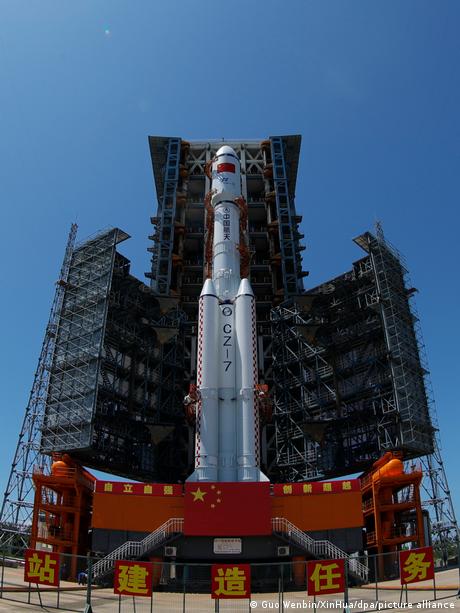 The Long March-7 rocket carried the Tianzhou-2, or "Heavenly Vessel," into space

Saturday's mission is also a preparation for the flight of three astronauts, who will be launched from the Jiuquan launch center in the Gobi Desert next month.

They are due to stay aboard the core module for three months.

Several other cargo flights and manned missions are planned over the next year.

Will China's space station be alone?

When the International Space Station (ISS)  ends its mission in 2030, China is on course to be the only country to have a permanent outpost in space.

The ISS is a collaboration of the US, EU, Russian, Japanese, and Canadian space programs and 15 countries, but China was barred from participating by Washington.

NASA says it is relying on private companies to create, launch and support a future ISS project.

Russia, meanwhile, has mooted its own space station but some analysts doubt whether it will be ready by 2030.

The fragments are from a Chinese space module launched at the end of last month. There had been speculation about where the debris would land, but experts predicted the chances of death or injuries were tiny.

China has launched an unmanned spacecraft that aims to retrieve rock and soil samples from the moon. It is the first such mission in several decades and comes as Beijing continues to step up its space program.