Chinese President Xi Jinping has begun a three-day trip to Brussels. He is the first Chinese leader to visit the headquarters of the European Union. 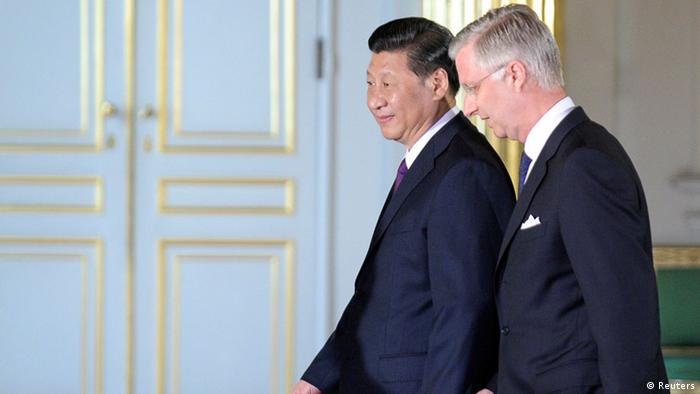 Xi Jinping received a royal welcome from Belgium's King Philippe (pictured above, right) and Queen Mathilde on Sunday in Brussels on the final stop of the Chinese leader's European trip.

After meeting with Belgium's royalty, Xi - accompanied by his wife - visited a zoo outside of Brussels, which recently became hosts to two giant pandas on loan from China.

The rest of the trip, however, will focus more on improving business relationships between China and the EU. Collectively, the EU is China's biggest trading partner, with more than a billion euros ($1.3 billion) worth of goods trading between the two every day.

A visit to a Volvo factory in Ghent is to be part of Xi's agenda on Tuesday. Volvo was acquired from Ford by Chinese company Geely in 2010.

The trade talks will benefit from recent resolutions by the EU and China to disputes over price dumping. China dropped its probe of price dumping of EU wine imports, while the EU called off its price dumping and subsidy inquiry into Chinese telecom companies.

On Tuesday, Xi is to give a speech on EU-China relations at the College of Europe in Bruges.

Prior to his arrival in Belgium, Xi's tour of Europe had taken him to the Netherlands, France and Germany, where he met with German Chancellor Angela Merkel.

China’s President Xi Jinping has begun his first-ever state trip to Europe in the Netherlands. During his trip he is expected to meet US President Obama on the sidelines of a nuclear security summit. (22.03.2014)